It’s time to once again do what we ought to be doing all year — celebrating the importance and contribution of women in the valuable work of making music, especially jazz. Melbourne and Sydney have excellent festivals to help us enjoy the work of women composers and improvisers, so let’s support these gigs.

I was unable to make the first two performances at this year’s MWIJF, which was a pity. But here is a rundown of what’s on from now until closing night on 9 December.

This is a small festival, yet there is nevertheless a clash (no festival is ever without one). So on Friday 7 December you’ll have to choose between Sandy Evans at The Salon and Kon Shes a little later at The Jazzlab.

All these gigs are reasonably priced so take the opportunity to hear great musicians at work.

Vocalist Merinda Dias-Jayasinha joined by Theo Carbo (guitar) and Isaac Gunnoo (double bass) presents a set of original music (plus a standard or two) exploring streams of consciousness, and the states between reality and dreams.

Energetic Melbourne trad jazz band Jam Jar offer an upbeat repertoire of original songs and beloved standards influenced by Louis Armstrong, Duke Ellington and local bands The Red Onion Band and The Hoodangers. Their self-titled debut album is a lighthearted commentary on the apathy and anxieties of modern life and a yearning for a romanticised past. Expect toe-tapping tunes.

Co-presented by the Melbourne Jazz Co-operative, the world premiere of Heart|Rhythm|Love will take the listener on a beautiful, thrilling and dynamic journey, seamlessly interweaving influences from Indian music and jazz in a joyous celebration.

The composer of this work, written and performed in honour of mridangam virtuoso Guru Kaaraikudi Mani, is Sandy Evans on saxophones. She is joined by Tripataka (Adrian Sherriff bass trombone, Jonathan Dimond electric bass guitar, Adam King drums) and Sai‐Sarangan Ravichandhira on mridangam.

Harriett Allcroft (voice) launches her debut album Archie. It was recorded with James Bowers (piano), Tamara Murphy (bass), Kieran Rafferty (drums) and Shaun Rammers (tenor saxophone) this year, but Sam Keevers will be at the keyboard for this outing.

Saturday 8 December 8, The Jazzlab, 11pm free entry
Festival Club – Jam session and general hang
This is a chance for female and non-binary musicians and vocalists to play in the jam session, or just plain hang out and connect with other musicians. In house PA, piano, bass amp, guitar amp and kit provided. All artforms welcome – jazz, trad, pop, funk, contemporary.

This concert showcases the work of The Girls Do Jazz workshop series, led by Andrea Keller, ran monthly over five Sundays in semester 2, 2018. Along with MCM alumni tutors, and undergraduate volunteers, the students engaged in jazz and improvisation studies covering free improvisation, the American songbook and compositions by contemporary Australian jazz musicians. This free concert showcases what they’ve been up to! 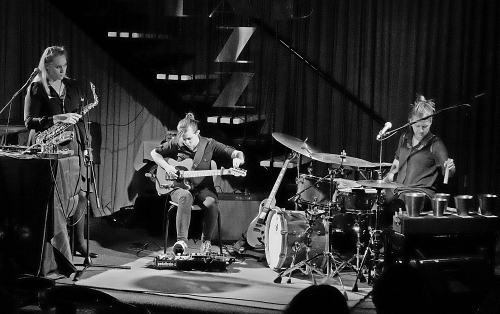 Don’t miss the winners of the 2017 MWIJF Recording Prize, Lijuka. This band featuring Katrina Owen on saxophone and vocals, Libby Ferris on guitar and vocals, and Julia Bebenek on drum kit/vocals, returns to The Jazzlab to play original songs featuring acoustic and electronic sounds combined with live-looping. The gig will feature songs from their recent audio-visual work ‘Macro/Microcosm’ which debuted at the Melbourne Fringe Festival. Lijuka would like to thank Myles Mumford (Rolling Stock Recording Rooms), and MWIJF for making this event possible.

Kathleen Halloran with Girls Do Jazz at the MWIJF 2017

The line-up is Bella Winter on alto/soprano saxophones, Jade Nye on alto saxophone, Steph Fels on trombone, Alex Rindfleish on piano, Ross Anderson on bass and Ollie Cox on drums.