Articles and images related to the 2015 Melbourne International Jazz Festival

A SUITCASE PACKED WITH GOODIES

Coverage of this year’s festival was necessarily truncated, because I had a suitcase to pack and a plane to catch early on June 5. I’d deliberately scaled down the list of concerts for review, keeping to the smaller venues that in my experience deliver an up close and personal experience.

So the sum of gigs attended was a paltry 11, but these delivered in spades, with hardly a dull moment and a succession of highlights. 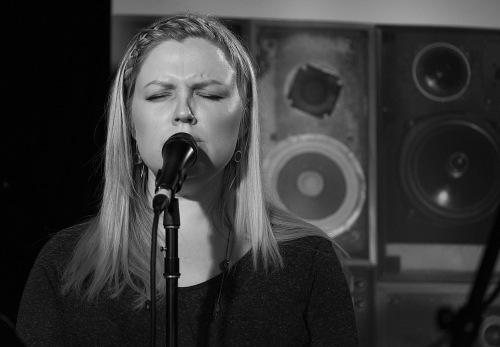 Starting with a high can set the tone for a festival experience, and I decided not to miss Maya, this year’s PBS Young Elder of Jazz Commission concert at the soon-to-close Bennetts Lane at 7pm on May 29. The work was composed by Gian Slater and featured Andrea Keller on piano and Simon Barker on drums along with Invenio Vocal Ensemble members Louisa Rankin, Hannah Cameron and Miriam Crellin.

I found this work enthralling, engrossing and seamlessly layered, delivered with great expertise, agility and presence by vocalists and instrumental players. Rather than there being two trios, I felt this was the most cohesive ensemble work so far by the adventurous Slater, who never shies away from breaking new ground. The Invenio vocalists were integral and superbly integrated with Slater as voices undulated, pulsated, soared and shimmered. Keller and Barker were riveting.

At 10pm that night, Bennetts Lane hosted the Walter Smith III Quintet, featuring the young tenor saxophonist with Taylor Eigsti on piano, Julian Lage on guitar, Harish Raghavan on double bass and Eric Harland on drums. Hindsight can be an impediment, because looking back on this concert after the following night’s outing by the same players under Harland’s direction for Voyager has influenced my perception.

There were definite highlights as Smith’s quintet played some pieces from the 2014 album Still Casual, including the billed “smoky balladry” in one case featuring a standout, long tenor solo, some fire from Lage in July and a muted but marvellous duo of guitar and sax in Goodnight Now. Yet this gig, on the night, was not compelling. As I discovered, the quintet would deliver much more in Harland’s Voyager.

David King at The Malthouse with The Bad Plus

But before that, at 7pm in Merlyn Theatre at the Malthouse, The Bad Plus were back in town, ready to fit their description in The New Yorker as “the Coen brothers of jazz”. Well I love the work of those filmic brothers and as soon as Ethan Iverson sat at the piano, Reid Anderson took up his bass and David King fired up the drum kit I realised just how much I loved the varying textures and rhythms of this trio.

Anderson, Iverson and King treated us to pieces from fairly recent albums (Inevitable Western, Made Possible) and some from those released much earlier (Give, These Are the Vistas), seeming to play quite independently and yet with evident interplay as they built ever-changing landscapes. The Bad Plus thrives on variations and it’s exciting.

These guys are seamless. This is intelligent jazz, if that makes any sense, with a clear sense of humour and many a deft touch. They obviously knew this material so well, and had played these pieces so often, that I wondered how much was new on the night. Maybe some, perhaps even all of it, but regardless it is a treat to hear such polished musicians at work.

At 10pm — or a little later, as I recall — Eric Harland took over the Walter Smith quintet and took us on a voyage with his Voyager. It’s crazy, perhaps, and not good reviewing practice, but on rare occasions I become so mesmerised and involved in the music that I fail to write even a sparse note or two to help me describe it later. This was one of those gigs.

I could not get over how much more compelling and energetic this quintet was when playing Harland’s compositions. It was the same band, but entirely different output. There were four Voyager gigs at this festival and I would be confident every punter came away with an experience to savour for a long time. Thanks Eric Harland for this journey. 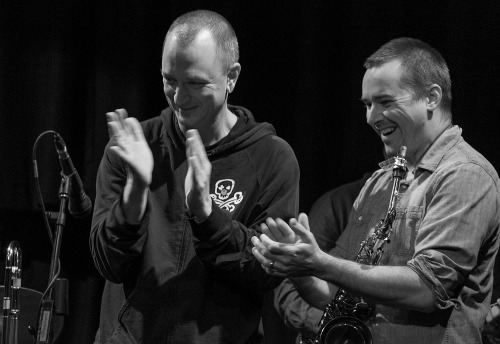 And now for something completely different. On Sunday, May 31 at 10am (the early hour should have told me something) Jazz Out West brought The Hoodangers to the Footscray Community Arts Centre for Jazz-a-Bye Baby. This was the wildest gig I’ve been to since Adam Simmons brought his Toy Band out west, but this time toddlers and babies had free rein. Invited to move about and take over the floor, littlies and their significant adults danced, jigged and moved to the fun music that streamed Hoodangers-style from the stage. It was a hoot and may have sown the seeds of musical appreciation in many a youngster. Adults probably left exhausted.

Allan Browne at the drum kit for Ithaca Bound

It seems fitting that Allan Browne, in the collaborative spirit integral to this ensemble, brought Homer’s epic odyssey to fruition before he died. Appropriately, it seems now, Ball’s composition Sanctuary seemed full of sadness before lifting us gently up. The band brought some swing to Memory and Kharis (Ball). Hughes and Haywood excelled in The Lotus Eaters (Ball). Al Browne’s only composition in the suite, Peace At Last, which reflected his love of poetry, faded gently away. 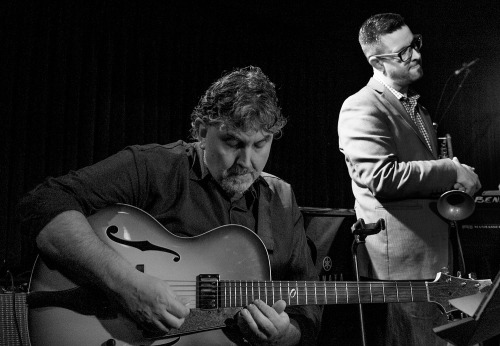 It is not possible to separate my recollection of that concert, which was rich and fulfilling as a suite of original works, from the knowledge that Al Browne is gone. I can say only that I miss him.

Julian Lage with his trio at Bennetts Lane

At 10pm Julian Lage joined Eric Harland and Harish Raghavan for what was a sublime display of delicacy and finesse in guitar virtuosity.

What a dream trio. Lage radiated enjoyment and enthusiasm as well as attentiveness, ensuring an upbeat and interactive dynamic that carried this gig to great heights.

Lage plays with lightness and fluidity, so that the notes float out from the guitar and hang in the air, yet there is plenty of propulsion, as evidenced in Gardens from his World’s Fair solo album. I did not want this concert to end.

On June 3 at the Malthouse, the Monash Art Ensemble with the Young Wagilak Group of South-East Arnhem Land performed Nyilpidgi under the baton of Paul Grabowsky. This festival premiere was a chance to again hear Daniel Wilfred on voice and bilma (clapsticks) and brother David on didjeridu in a larger setting than Bennetts Lane, where I found the CD launch of Crossing Roper’s Bar Volume 2 deeply affecting.

That sort of emotional involvement or affect is more difficult in a large auditorium and when you are not sitting a metre or two from the players. In Merlyn Theatre Daniel Wilfred’s voice had presence rather than real power.

I found Nyilpidgi to be difficult music, fragmented and changeable, full of contrasts and sharp edges. It was often fiery and dramatic. Yet all this was surely entirely intended. Grabowsky, the ensemble and the Wilfred brothers were marrying music from the world’s oldest living culture with computer-generated, electronic crackle (courtesy of Australian Art Orchestra Artistic Director Peter Knight) and the most modern of jazz explorations, so some fireworks were to be expected.

I’m not sure it formed a cohesive whole and at times I found the music shocking (that is, it made me sit up and take notice). There were some great individual contributions from the ensemble, including those of Paul Williamson on trumpet, Rob Burke on soprano sax, Tony Hicks on clarinet and a young sax player who I can’t name. And the closing Goodbye Song demonstrated the deep affection and mutual respect between these musicians.

The moving finale to Nyilpidgi

Did Nyilpidgi work? For me, it did not conjure images of the ancestor creating his land again, making spears, hunting, weaving and dissolving into the wind, as the program notes stated. Yet it was an arresting and always lively coalition of cultures that perhaps was intended to challenge. If so, it did.

I wanted to stay to hear Barney McAll’s Mooroolbark at the Malthouse, the band resplendent in orange safety vests, but this was one of the inevitable festival clashes. I heard too little before having to leave for Bennetts Lane to catch expatriate pianist Marc Hannaford with Ellery Eskelin on saxophone, Scott Tinkler on trumpet and Tom Rainey on drum kit.

I had not heard Hannaford’s 2014 album Can You See With Two Sets of Eyes?, which features this line-up, but after listening to it since I realise that the live festival set made the recorded versions seem tame. That was to be expected, as was the calibre of the two New York musicians who joined Hannaford, now living there, and Tinkler.

You’d have to say this complex, cool music is not for everyone, but anyone who was not totally blown away by this outing had long since left the building. We all sat there riveted, loving every minute. Rainey’s engagement was superb and Eskelin made intricacy an art form. Tinkler was in fine form — my ears hurt in Composition No.2 — and it was great to hear Hannaford back in Melbourne, albeit briefly. 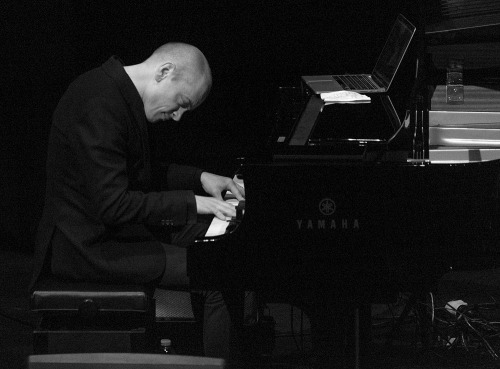 Tord Gustavsen at The Malthouse

My final night at the MIJF began at the Malthouse with the Tord Gustavsen Quartet, featuring Norway’s Gustavsen on piano, Tore Brunborg on saxophone, Sigurd Hole on double bass and Jarle Vepestad on drums. Amid frantic preparations to fly away, I was ready for some reflective music and a dose of peacefulness. 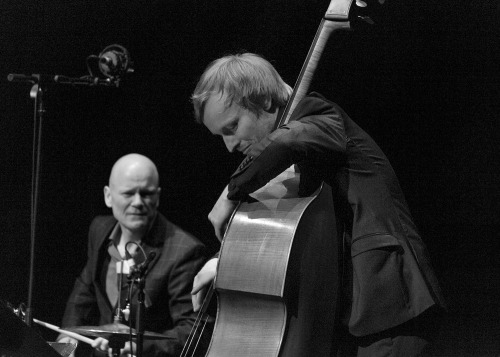 Jarle Vepestad and Sigurd Hole at The Malthouse

The quartet did not disappoint. Traditional Norwegian folk tunes injected welcome energy in some pieces, which were faster and toe-tappingly swinging, but most were restful and exploratory, at times slow and majestic, then suggestive of sweeping vistas in afternoon light. After the closing Castle in Heaven, which began with bowed bass and piano before featuring some filigree-light drum work, an encore was mandatory. This concert was a meditative experience. 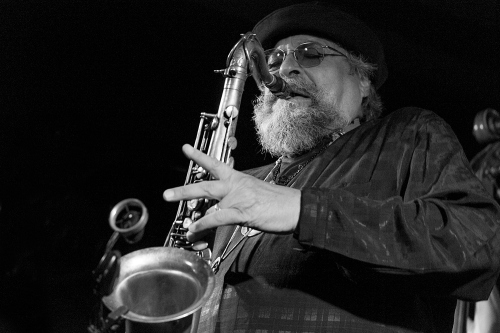 But that mood was to be broken. Between 11.30pm and 1am at Bennetts Lane — my last chance to hear music there — Grammy-award winning saxophonist Joe Lovano would reunite with Paul Grabowsky on piano, Philip Rex on bass and Dave Beck on drums in a mind-blowing extravaganza of an outing that took no prisoners and carried us all into the stratosphere. 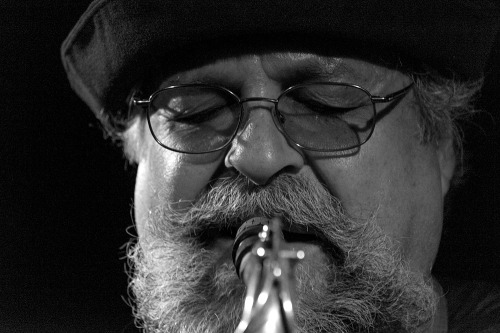 Am I getting a little carried away? Possibly a tad, but not really. This was a solid wall-to-wall set of extraordinary music that served as a perfect ending to my festival and a send-off to the landmark jazz club that had delivered so many inspirational moments.

In extended takes on Lovano’s Folk Art, Our Daily Bread and Monk’s Four in One, Lovano, Grabowsky, Rex and Beck took hold of us and played as if there was nothing else in the world. And, for 90 minutes, there wasn’t.

I slipped away into the night, home to pack a suitcase and head into another hemisphere. This had been a truncated Melbourne International Jazz Festival, but it had provided some ripper gigs. Bring on the next one.

Coming soon: Preview of this year’s Wangaratta Festival of Jazz and Blues.