ROGER MITCHELL reflects on two concerts by the Josh Roseman Unit at Wangaratta on October 29 & 30, 2011: 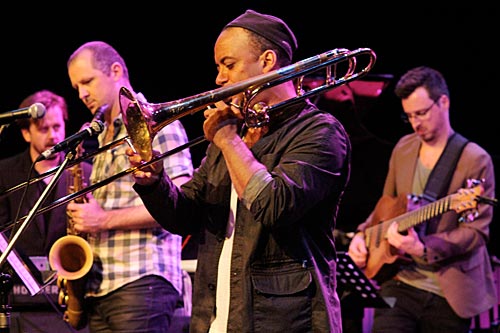 Sunday at Wangaratta Jazz and Blues Festival brought the opportunity to revisit and reflect, as well as to hear a moving suite performed live, and something well out of left field involving a choir and two pianos.

The day’s lesson came early, but not at the jazz mass featuring Leigh Barker’s New Sheiks. One festival soon I will make it to Holy Trinity Cathedral for that service. No, the lesson to which I refer is that no concert — especially if it involves overseas artists — should be assumed to be a carbon copy of one delivered by the same band the night before.

Of course, that can happen. Sunday ended with Linda Oh Quartet playing much the same material, albeit in slightly different order, as it had in the opening concert. That was a little disappointing and, coupled with the fact that band and audience were tired, may have contributed to an outing that lacked some pizzazz.

But for 11am Sunday, in what would usually be a tougher timeslot than the gig which closed Saturday night’s proceedings, Josh Roseman decided to add to his band’s line-up, bringing in Chris Hale on electric bass guitar and Jamie Oehlers on tenor sax.

Joining the Unit: Chris Hale sits in at Wangaratta.

I’m not sure whether these two made the difference, but Sunday morning’s seemed to be the Unit’s best outing in the festival.

Not that Saturday night’s concert was at all lacklustre. There’s a lot going on in this band, but it is subtle and perhaps somewhat camouflaged by Roseman’s looseness and wit. I suspect he is closely monitoring every nuance, but doesn’t let that show. The night gig lasted almost two hours, opening with the sonically luscious and rhythmically rich Regression, then the brief and gentle layerings of Fortunato, which explored the rich trombone timbre, followed by some of The Suite — a work commissioned by SFJazz — that successively brought to mind Gest8, Ari Hoenig Quartet and Jimmy Smith as I listened with a smile on my face. Roseman, amid his banter, referred to having “an opportunity to redefine voices” and that seemed to make sense in The Suite as his input on ’bone seemed soft, warm and cuddly.

Still in Saturday’s concert, the Unit played a piece by one of Rosman’s idols, Don Drummond, entitled Thoroughfare (“Help me, Don”, Roseman said a couple of times, in a prayer of sorts), Sedate Remix — a surreal, calm piece in which we could have been in a church for a start and later somewhere out there with Sun Ra — and finally Theme, Motormouth and Swartz, named after a fictional legal firm, with some pretty special special effects from Barney McAll and Peter Apfelbaum.

Having revisited that concert, and realised there was a lot to it, I’d still have to say the next morning brought us something more special. It’s hard to say why, except that this had less banter and a more serious feel. After the Bob Marley tune Crazy Baldheads came Blues for Austria, a toe-tapping piece, which I loved, that opened and closed with muted horns and included great drum work by Ted Poor. The Swamp Tune again ventured into the surreal, with Oehlers allegedly playing only one note, Apfelbaum very effective on Korg and Roseman adding some tiny touches of fine tuning. Suddenly, at Roseman’s direction, drums, horns and all manner of keyboards kicked in for a rollicking finish.

The concert finished with the title track from Treats for the Nightwalker. Roseman is an intriguing individual and I look forward to seeing where he ventures in musical experimentation, along with the madcap Barney McAll. If a trombone solo recording eventuates, I’d like to hear that.

As for the moving suite performed live, and something well out of left field involving a choir and two pianos, the next post will tell all.

Note: Pictures will be added gradually.

Radio DJs used to spruik their wares with the words “recorded live”, which always seemed an oxymoron. If I say music grips me most if it’s “created live” that is similarly nonsensical in one sense, so to speak, but nevertheless has meaning. Imagine being with a band as a song is born and you may get my drift. It would be exciting.

The prospect of more than 12 hours of almost non-stop music performed by local and international musicians on day two of the 2011 Wangaratta Jazz and Blues Festival was exciting. But which gigs would be memorable highlights?

Of course it’s subjective. For example, I walked into St Patrick’s Hall to sample Thirsty Merc singer, guitarist and keyboard player Rai Thistlewayte in a rare solo concert, waited for far too few minutes to be fair to him before departing. It wasn’t my cup of tea. Those who stayed, I’m told, were absolutely wowed by Thistlewayte’s talent as vocalist, pianist and entertainer. They loved him.

Earlier, when Barre Phillips performed a solo bass set in the magnificent setting of the Holy Trinity Cathedral, I was surprised to see members of the audience streaming towards the door each time there was a break in his playing. It was not their cup of tea.

Three concerts emerged as highlights for me on Saturday — two completely composed on the run and two bringing together duos in noteworthy collaborations. One fitted both categories.

In 2008, when the festival had to erect elaborate marquees to replace venues lost to make way for the new Wangaratta Performing Arts Centre, Lost and Found — pianist/composer Paul Grabowsky, saxophonist Jamie Oehlers and drummer Dave Beck — treated us to an hour of spontaneous composition that was riveting and inspired. The trio did it again on Saturday at 11am in the WPAC Theatre, in an expressive, captivating and creative outpouring that made me realise how much I love being able to watch truly live music. This was thrilling. We were seeing, and hearing, a work evolve in real time.

I am fascinated by how these three achieve the structure, coherence and degree of assurance in their work, which never seems to waver. The piece was alternately building and waning in intensity as Grabowsky, Oehlers and Beck at times each appeared to do their own thing, but were each always in a state of alertness, listening and responding. Grabowsky would contribute a quick chord that spiked into the narrative, starting something that took the players in a new direction. Later, the piano evoked bell chimes as the intensity subsided, leaving only fluid, liquid sax.

There was suspense in this thriller, the trio keeping us waiting and creating a sense of expectation that kept us engrossed. Grabowsky’s playing created the space to feed this audience anticipation. Beck’s contributions were always in tune with the changing moods. I had another concert to get to, but could not leave. I had to wait until the end.

At 5pm Saturday, also in the WPAC Theatre, bassist Barre Phillips reunited with pianist Mike Nock, with whom he had played years ago in New York, for another engrossing concert of music created in the moment. Their encounter began as a light-hearted competition to see who could be more minimalist, then grew more serious.

To me, this — as did Lost and Found — captured the essence of jazz’s essential appeal: the excitement of what might happen next, always present in any improvisation, but more purely expressed in these totally unscripted encounters. Between Phillips and Nock there was tension. There was also delicacy, space and patience, exceptional clarity, sparseness and an artist’s palette of dynamics and timbre. There was rhythmic warfare, or at least a skirmish or two, before glorious congruence. It was a symphony, if at times an agitated one, with the players prompting the audience to wonder “What will each intervention produce?” and “Will it completely change the mood?”

At one point Phillips was clawing his fingers up the strings, his double bass weeping. Nock’s response was a grumbling and growling piano. And until the end of this engrossing encounter, both were ever attentive, ever watchful.

Before waxing lyrical on the third of the day’s highlights, I will mention Barre Phillips’ solo bass concert in Holy Trinity Cathedral at noon. I had hoped to hear lots of bowed bass from the maestro, but after his first piece he delivered a cornucopia of techniques — all we ever imagined could be done with an upright bass, but were afraid to ask.

He strummed close to the neck and down beside the bridge, he slapped the wood, he played pizzicato on the upper strings, he cut the heel of his hand into the strings and slid it down, he tapped strings with the bow handle and slid it down a little (delicacy) and a lot (drama), he rubbed the bow handle against the edges of the f-hole, in circles over the bass body and strings, he tapped the bow stick against the bridge and the end of its handle on the strings and he rattled the bow against the back of the stem and top of the instrument’s body.

In the penultimate piece, Phillips produced peaceful, calming sounds, letting the sound of strummed strings reverberate in the vaulted cathedral space. In the last, his moth-like fluttering hand gave way to fast strumming as the piece built and subsided.

It was an amazing exhibition of technique. Yet it did not move or engage me in the way that Phillips’ encounter with Nock would do later that day. Perhaps it lacked a sense of tension and development or evolution.

The third highlight of the day was the pairing of Paul Grabowsky on piano with Sandy Evans on saxophones. These two consummate musicians had never performed together as a duo before.

It was fitting that they included three tracks from Grabowsky’s Love’s Calendar suite on his Hush Collection album (with the late Gary Costello on bass and Andrew Gander on drums) for the children’s hospitals — born out of the pianist’s wish to give something back after his son Guy’s treatment for a serious illness in 2004. Evans’ latest album, When the Sky Cries Rainbows, is a response to her musician husband Tony Gorman’s illness.

Their set opened and closed with April. In between they played September, Mountview (Evans), I Want to Talk About You (standard), Heartbeat (Evans) and March.

There was no sentimentality. To me this felt like a journey through life taken by longtime and very close friends who delight in each other’s company and still have plenty to say to each other, at times engaging in vigorous debate. It was also balm for the soul, because parts of this memorable exchange were so beautiful.

Just one notch down from these highlights of Saturday were performances by the Fabian Almazan Trio, Les Society Des Antipodes, Gian Slater and Linda Oh, and the Josh Roseman Unit. Perhaps it’s best to add another post about these.

Note: Pictures will be added gradually. 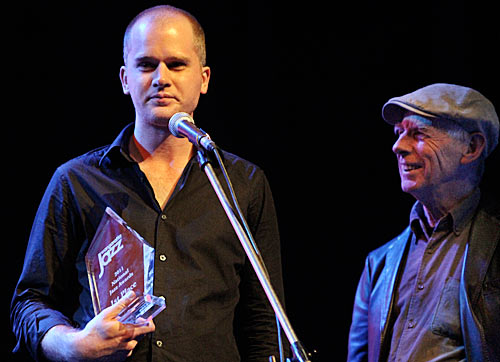 First among drummers: Tim Firth with one of the judges, Mike Nock

from Wangaratta: National jazz awards for 2011 (drumming) are as follows:

Tim wins $8000, a studio recording session for Jazztrack with Mal Stanley on ABC Classic FM and an invitation to appear at Stonnington Jazz Festival in 2011. Ben wins $5000. Dave wins $2000.

Congratulations to the winners, finalists and all who almost made it.

Here’s a look at Tim Firth’s style in the final play-off: