Pianist Louise Denson and alto saxophonist Martha Baartz are co-leaders on this debut album by a relatively new group featuring their original compositions. It was recorded live at the Brisbane International Jazz Festival in 2017 at the Brisbane Multicultural Centre.

Originally from Canada, Denson has lectured at Queensland Conservatorium for more than 20 years, producing four albums there with her LDG ensemble since 1996. Baartz worked in Melbourne with the Baartz-Freeman Sextet before moving back to the Byron Bay area, where she teaches saxophone at Lismore campus of Southern Cross University and is a first-call saxophonist from Brisbane to the Northern Rivers.

Denson and Baartz are perfectly matched in this delightful collection of tunes which range from gently driving swing in Kingston Blues (Baartz) to the more pensive Now You Are Gone (Denson), which begins with solo piano before the alto saxophone floats in a wistful, slow lament. The album feels infused with balmy air currents, yet the toes will be tapping during Sambacita (Denson) and the jaunty She Can (Baartz). Piano and sax combine to give momentum in Cheek (Denson), and there is a bright and saucy strength to King’s Gold (Baartz). The alto muses over strong bass and piano rhythms in Lately (Denson). The title track (Baartz) seems less about foreboding and perhaps more about the gradual closing of a day, while the beautiful Murphy’s Love (Baartz) is a dreamy soliloquy woven tenderly with piano, bass, sax and flugelhorn notes.

Dark Sky is a debut album for this group, yet it feels like a completion – a coming together that was meant to happen.

Dark Sky was recorded, mixed and mastered by Mark Smith of Real Productions, and was released under the Pinnacles Music label.

* I don’t like giving stars, because they mean such different things to different people, but the rating is out of five and that number would rarely, if ever, be reached, and then only on an album that had stood the test of time.

I have not reviewed albums for a long time, for a few reasons, but that may change. Let’s see how this turns out.

If I were a musician it’s fair bet that I’d be anxious about not being inventive enough and being caught out repeating phrases that I’d used in previous solos — worried that I may not be keeping the improvisations fresh and always different. That kind of concern is in the back of my mind whenever I write reviews of albums or live performances — my version of the goalkeeper’s fear of the penalty kick is the fear that I’ll keep repeating words and phrases, thereby revealing an inability to do more than trot out a standard set of reactions to the music. With that goes a worry about my lack of musical training or knowledge, and my limited knowledge of the American songbook and the deeply embedded lore of jazz.

When I read, for instance, Paul Grabowsky‘s words about music and musicians, I’m inclined to think that if the people who play so well and compose music so well can write about it so eloquently, why not leave it to them.

Another reason for avoiding CD reviews is that I slipped so far behind in delivering them that it became an obligation not met and therefore the joy of listening slipped away a little. Why was it hard to just pop out a review? Well, partly for the reasons expressed above, but also because music is, I believe, not easy to write about. I have long yearned for a feed from the brain to the screen (or paper) so that my experience can be delivered directly to the reader, without interference. In that way, when I’m in the moment listening at a live gig or to an album via headphones, the intensity of that experience could be delivered undiluted. It would still, of course, be one person’s experience, as is any reviewer’s.

So, with that palaver out of the way, what can I say about Tom Vincent‘s Blues in America? First, the mechanics. Blues in America was recorded in October 2015 at Sound Pure studio in Durham, North Carolina and at Big Orange Sheep in Brooklyn, New York City.  Vincent is joined on the Durham tracks — one, three and five — by Branford Marsalis on soprano and tenor saxophones and by Leigh Barker on double bass, and on the Brooklyn tracks —two and four — by Matt Clohesy, who has lived in New York for many years, on double bass. Hobart drummer Alf Jackson plays on all tracks.

When Vincent launched his Pozible campaign to fund Blues in America, he said, “This is going to be a swingin’ album”. He’s not wrong. Swing and propulsion are evident throughout, and that’s not so common in a lot of improvised music these days. Much of the drive comes from Barker and Clohesy, of course, but the rhythmic thrust shown in Sweet Georgia Brown, along with varied dynamics and nice chordal contrasts, provides a great paradigm of a rhythm section in top form. This Georgia is one toe-tappin’ gal.

The opening A Beautiful Friendship — featuring wandering, exploratory and at times embroidered piano soloing followed by tenor musings and some interplay from Marsalis — is well laid back, yet ends with a heightened sense of swing.

Vincent’s original Blues in America is pretty jaunty for a blues and much faster, with lots of rapid and intricate repartee between piano and soprano sax, Marsalis being more agile than the nation Malcolm Turnbull once dreamed about. The exchanges make this a favourite for me.

Much slower is the Autumn in New York ballad and the mood change conjures images of leaves drifting down from the trees in Central Park, with maybe a sprinkling or two of drops after a shower. Put your feet up for this and let the thoughts drift past.

Indiana is bright and jaunty, Barker taking us on a fast walk as Vincent treats us to expansive vistas with gentle swing and Marsalis floats out easy tenor notes over the brush work of Jackson. The ending is tight and punchy, with a final “parp” from Marsalis.

Tom Vincent’s Blues in America is further confirmation — as if we needed it — that Australian jazz musicians can seamlessly team with those in the New York scene and produce a fine result. It also provides an excellent opportunity to demonstrate just how good Vincent is at the keyboard, delivering fluidity and swing in a way that draws on what I think of as older traditions or roots of jazz.

* Stars? I’m not so keen on the star ratings, mainly because they can be used so differently by reviewers. In the tradition I was taught by Kenny Weir at the Sunday Herald Sun, where 4.5 or 5 stars were reserved for albums that had survived the test of time and had probably been re-released, I’d say this is a 3.5 plus, which is a definite recommendation to buy. If you want to, go to Tom Vincent’s website. 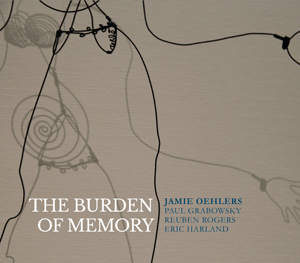 How much do we need to analyse music and how much to just listen? To what extent can we escape our expectations of music from musicians who we’ve heard many times and yet not nearly enough?

To the first question, the answer is probably that to listen is sufficient, and that by listening more we gain more — appreciation, understanding and enjoyment. To the second, the answer is that we can easily be surprised. That is one of the joys of jazz or improvised music.

With this line-up of WA saxophonist Oehlers, Melbourne pianist Grabowsky and, from the US, bassist Rogers and drummer Harland, an album of strong, driving jazz was on the cards. But the original Oehlers compositions recorded in March this year (2015) in Brooklyn are full of subtleties and gentle expression. In a reworking of the standard Polkadots and Moonbeams, Oehlers pays tribute to his first saxophone teacher, Roger Garrood, “for instilling in me the importance of expression through music” and the whole mood of the album echoes and amplifies that commitment.

Evident in these pieces — and well complemented by Oehlers’ liner notes — is a thoughtfulness and introspection, a willingness to reflect on our changes (Revolutions), our world (Armistice), our minds (the title track), our fears (The Deep Freeze), our empathetic relationships (Helix) and our losses (Goodbye).

There’s plenty of grit here, even in And Moonbeams and especially in The Deep Freeze, but the lightness and floating beauty is frequently there so these compositions are anything but the burden that the title suggests. We are invited to luxuriate in and be captivated by the understated finesse of these players who can and do, in other contexts, produce so much power and driving force.

The Burden of Memory is an album to let wash over us, so that we may feel our minds have been gently cleansed and refreshed — but only after some pensiveness and soul-searching.

The Burden of Memory is available via Bandcamp