A WARM VIBE THAT JOY RADIATED 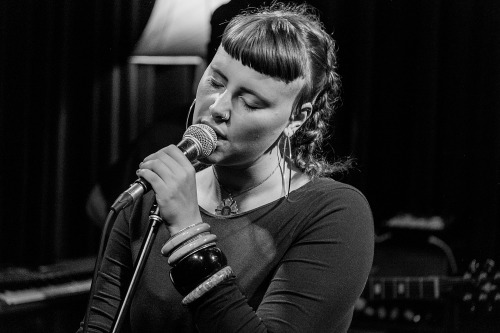 Allysha Joy performs with 30/70 Collective at The Reverence Hotel, Footscray

A Brother Scratch and 30/70 Collective, The Reverence Hotel, Footscray, Saturday 4 June, 2016 at 8pm for the Melbourne International Jazz Festival

I’m always keen to support live music in the western suburbs of Melbourne and the fact that Michael Tortoni, artistic director of the festival, has links to this part of town has brought a welcome stream of MIJF gigs over the past few years.

The program promised an evening of “gritty and soulful tunes” and “signature hypnotic grooves”, which pretty much turned out to be accurate. I was sure I’d be the oldest person there by some decades, which also turned out to be true.

As thoroughly uneducated in this style of music, I can’t give an informed review. There were certainly elements of hip-hop, rap, soul and jazz, so that the beat wasn’t everything and there was plenty of variation to make this interesting music.

The first set, which I assumed was 30/70 Collective, turned out to be A Brother Scratch, featuring Henry Hicks on electric bass, Ziggy Zietgiest quite prominent on drums, Thhomas Mansfield on guitar, Joel Trigg on keys and Pataphysics on trumpet and vocals.

Pataphysics provided most of the vocal input, at times using a second mic to alter his voice, but Allysha Joy sat in on vocals for a few songs, giving us a taste of the sparkle to come later. Zietgiest took a leading role, delivering “heavy set padded strolling-paced beats” — a description that I’ve pinched from a more informed reviewer (it fits). Trigg on keys made sure this set had some lively bursts. 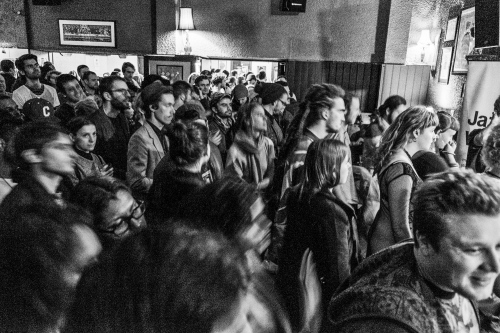 The Reverence Hotel grooves to 30/70 Collective.

The line-up for the second set utilised others from 30/70 Collective — Jarrod Chase took over on keys, Reuben Lewis (known in jazz circles) on trumpet, Nathaniel Sametz added trombone and Allysha Joy set some smoke drifting up before moving to the mic.

My previous meandering and fairly inconsequential post referred to the “group hug” by this group before the second set. It really did set the scene for a warm vibe that soon had the room moving as one.

I slightly preferred the second set. The horns worked well, there was at times a distinct flavour of Sun Ra and his Arkestra — it was definitely otherworldly — and on vocals Joy brought exactly what her name suggested. Her work at the mic radiated fun, energy and enjoyment, conveyed with her great voice.

In some strict sense of that ill-defined term “jazz”, this music did not fit in a “jazz festival”, but I really don’t think that matters. I was reminded strongly of the vibe at Bennetts Lane when Snarky Puppy first played to sellout audiences in 2013. The audiences loved them and here, in this packed room at The Reverence, a room full of appreciative young music lovers were having fun and grooving to this band.

Some of my pics from the gig are below: 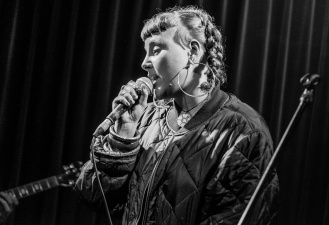 Joel Trigg on keys with A Brother Scratch.

Pataphysics on vocals with A Brother Scratch. 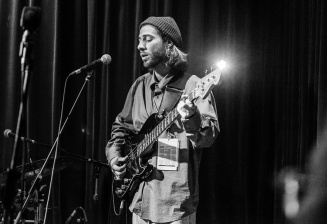 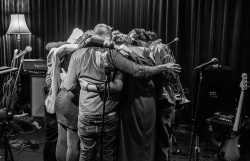 30/70 Collective go into a huddle before performing. 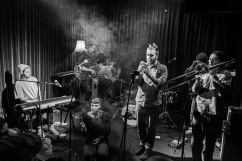 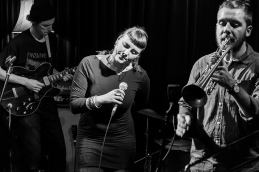 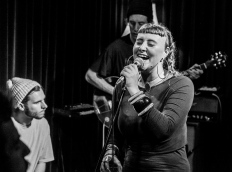 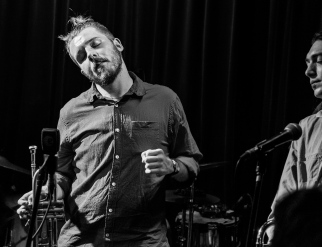