MANY HIGHLIGHTS, MANY FROM CLOSE TO HOME 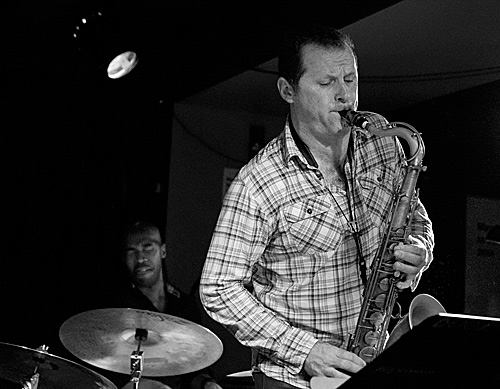 Eric Harland and Jamie Oehlers in a MIJF highlight for 2014.

So far for this year’s MIJF I’ve posted previews, pictorial updates and reflections that have sometimes ended up as mini reviews. But the intention was to leave most of the reviewing until the festival was over. So, I can report that I went to 23 concerts, counting each set of two double bills and each set of three with brief support acts. The venues included Hamer Hall, the Melbourne Recital Centre, the Malthouse, Melbourne Town Hall and Bennetts Lane. I did not make it to club sessions at Uptown Jazz Cafe or Dizzy’s Jazz Club, but heard there were some great gigs there that I missed.

While on venues, it was good to have Uptown included this year and the Malthouse turned out well, attracting some good crowds to evenings that included, effectively, three concerts. The lighting there, as I have said elsewhere, was poor, but that comment also applies to the Footscray Community Arts Centre and to Bennetts Lane. (I’m told by Laki Sideris that I have to make the lighting work for me when taking photographs, and I’ve been trying to do that.)

The observation has been made elsewhere that this festival brought out international artists who’ve been before, rather than other musicians new to the festival who do not have the established names to draw crowds. It must always be a balancing act for any festival’s artistic and program directors, but Adrian Jackson has long had a reputation for bringing relative newcomers to the Wangaratta Jazz and Blues Festival, so it can be done.

I think a more important issue is what happened in the venues on the nights, and how audiences reacted. The other question is how are we to judge the success or otherwise of these festivals — is it about bums on seats, audience reaction or the opinions of assorted critics? That could open a large can of worms, but I think it is useful to report on gigs that electrify or engage the audience, as well as to comment on the performances.

I tried dividing the concerts I attended into highlights, worthy mentions and those not so hot. Of the highlights, only seven involved international artists and the remaining 12 were by Australian musicians. I found that interesting. 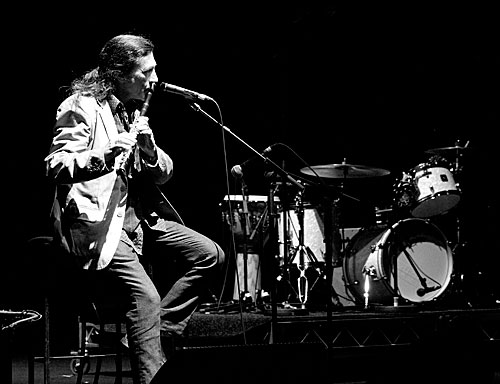 The “not so hot” category is a misnomer, because it was probably the type of music played that did not appeal to me so much. In each case there were plenty of happy patrons. But I was not among them when Jorge Pardo joined Josemi Cameron and Jose Manuel in Huellas. Pardo on tenor sax and flute, and Cameron on guitar were skilled musicians, but as the solos dragged on and the music rose and fell, I found that it did not go anywhere too interesting (too subtle for me?) and that there was insufficient variation in Jose Manuel’s percussion work. 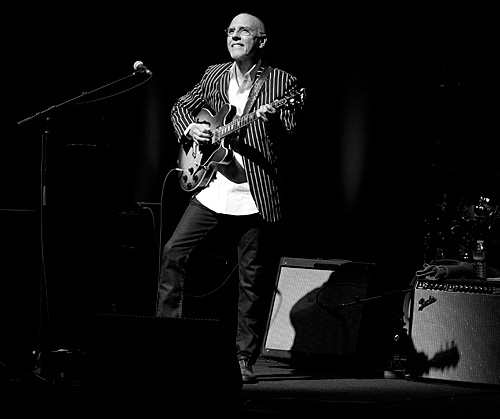 The Larry Carlton Quartet also suffered from repetitive drumming by Gerry Pantazis and, while Phil Turcio on keys did his best to lift the intensity, I found this group’s material too fruity and easy listening for my taste — soft rock that lacked differentiation and space, failing to reach any heights or plumb any depths.

Israeli pair Daniel Zamir and Tomer Bar engaged the audience with melodies that seemed to draw more on Jewish tradition than jazz. There was some audience involvement that worked, but it just was not going to set my nerves jangling.

On to the worthy mentions, which is meant as a positive category without any rafters being lifted. The lightly cooked Omelette served up by Jordan Murray, Stephen Magnusson, Mark Shepherd and Ronny Ferella before Charles Lloyd’s Sky Trio took the MRC stage was muted, carefully crafted and perfect as a way into the main gig, although I found the guitar did not come through strongly.

Sky Trio was as anticipated, delivering fluidity, warmth, a sense of fun at times, beauty, musings and flights of fantasy. Being at a Lloyd concert is akin to a religious experience. Backed by the superb rhythm section of Reuben Rogers on bass and Eric Harland on drums, Lloyd showed he has the breath and finesse to deliver long, meditative solos on tenor sax, flute and tarogato. The encore of standard Where Are You and Lloyd’s Sweet Georgia Bright, including Harland’s controlled solo, ended the set on a high. A festival highlight? Not quite, possibly because it was so laid back. 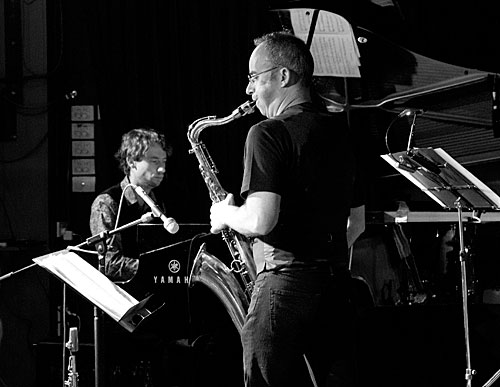 This concert was great, but I went on to hear Brisbane’s Trichotomy at Bennetts Lane, with UK guest Julian Arguelles on sax, and discovered this night’s highlight. Formerly known as Misinterprotato, this trio featured Sean Foran on piano, Sam Vincent on bass and John Parker on drums. The set was full of inventiveness, interest, variation and effective provision of space. 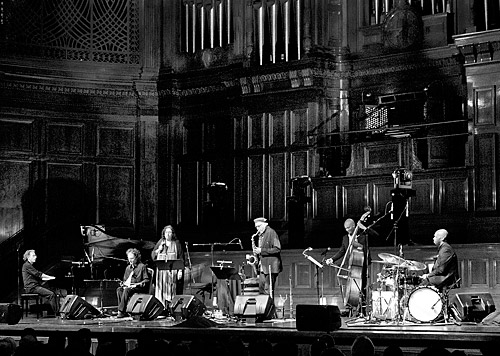 The Greek Project musicians on stage at Melbourne Town Hall.

Back on the worthy mentions track, Charles Lloyd and Maria Farantouri’s The Greek Project, also featuring Rogers, Harland, Takis Farazis on piano and Socratis Sinopolous on politiki and pontiac lyras, was an exposition of the unity achieved when two individuals from different cultural roots and musical traditions discover much in common. In CL Blue, Lloyd seemed to lay his notes on the air and send them off and in Requiem his sax was ending Farantouri’s sentences. In Prayer, the lyra notes from Sinopolous were high, clear and plaintive, then entering a dance. Farantouri’s voice was fascinating — it had strength without great projection, emerging from deep in her throat and seeming to delve into history. This concert was a monumental event. But it lacked the focus and impetus of Lloyd’s Sangam concert of 2010, and in Greek Suite pieces it perhaps lacked the ability to hold attention.

It may seem heresy to some, but I have to be honest and say that one of my festival highlights followed The Greek Project. I’d been told by several people not to bother hearing Chris Dave and The Drumhedz, especially not after the Lloyd/Farantouri concert, because it would be such an abrupt change. 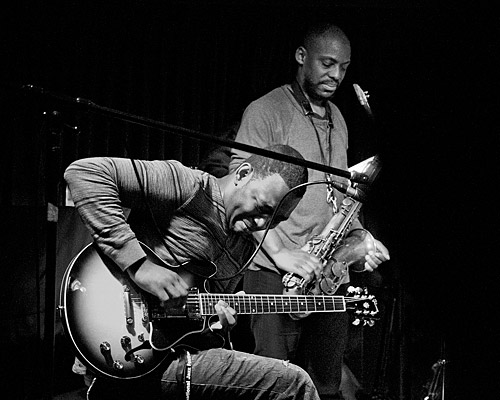 Isaiah Sharkey on guitar and Marcus Strickland on sax.

I went to Bennetts Lane expecting to feel like a fish out of water at a gig that would have appeal to a younger audience into a mix of R&B, funk, hip-hop and electronica, with some rock and jazz thrown in. I had listened to some YouTube clips that had not turned me on. Well, Chris Dave on augmented drum kit — with two tall, corkscrew cymbals — Isaiah Sharkey on guitar, Nick McNack on bass and Marcus Strickland on tenor and soprano sax produced a set that held my interest from the word go until almost the finish, when an encore piece went on a bit too long. Sharkey’s guitar playing was a work of art, with lots of variation and heaps of skill. Dave on drums was virtuosic, Strickland produced some excellent solos and McNack was solid on electric bass. But the appeal was in the watchfulness and interaction in this band. So much was going on and in this performance (out of three) it was evident that decisions were being made and fun was being had throughout. They were having a ball and so was the audience. This was an unexpected, but clear highlight.

Eminently worthy of mention was the Allan Browne Quintet‘s performance of The Drunken Boat suite the following night at Bennetts Lane, its often short pieces providing a feast of diverse moods and styles. 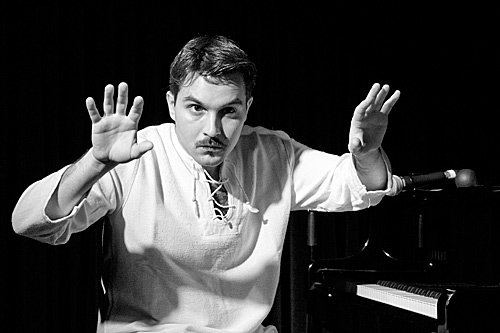 An unexpected festival highlight was Livio Minafra‘s entertaining and engaging gig at the same venue that night, which I have already reviewed.  OK, it was a stretch to call it jazz, but I found it most enjoyable and fun. 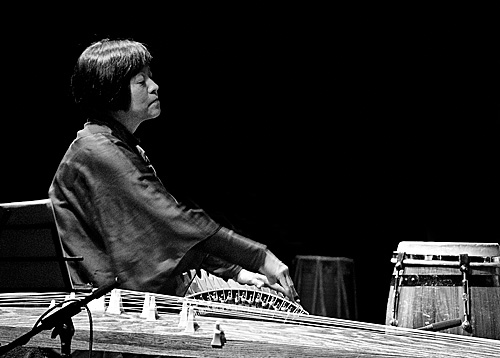 Tuesday 3 June was a standout in my view, bringing two festival highlights in one night. At Footscray Community Arts Centre — see earlier post — Peter Knight’s Way Out West played long-awaited new material that will soon emerge on a fourth album, as well as some pieces from earlier recordings. There was so much to like about this diverse ensemble’s outing, but I particularly appreciated the space and developing intensity of The Birds, which made excellent use of the clarity in  Satsuki Odamura‘s koto notes. In Music For April, muted koto notes were like drops of water and Lucas Michailidis’ guitar notes seemed to be propelled as if by springs. Laptop crackle, guitar and koto built an eerie feel to Nine Years Later, in which the ensemble took us to wonderful places. This was a considered and carefully crafted outing and I look forward to the new Way Out West album. 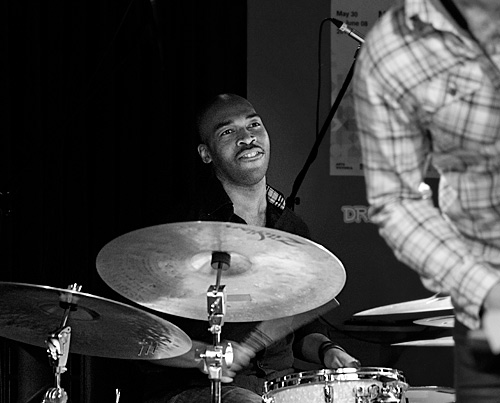 From way out west I rushed to Bennetts Lane for what was to be my top highlight of this festival for 2014, bringing Rogers and Harland from Lloyd’s Sky Trio together with Paul Grabowsky on piano and Jamie Oehlers on saxophone. As mentioned in an  earlier post, this concert was an excellent example of why many of us love jazz. Paper Tiger opened with all stops out and we heard some sharp attacks and searing solos during the set, but in Oehlers’ Innocent Dreamer and Grabowsky’s Angel we were surrounded by inexpressible beauty. This group is recording in January. Bring it on. 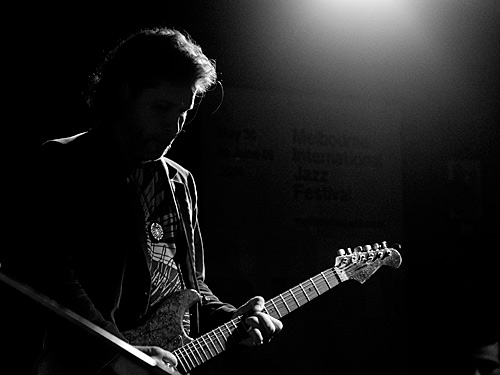 Other festival highlights covered in earlier posts were the opening set at Melbourne Recital Centre by Here and Now, the fascinating outing by Finnish trio Jukka Perko Avara at Bennetts Lane and the double bill at The Malthouse featuring Alister Spence Trio and Dawn of Midi. The last of these three posts also covered Django Bates Beloved trio’s celebration of Charlie Parker, with help from Monash Art Ensemble, which I ranked as eminently worthy of mention, but not one of my highlights.

Another post, entitled a Sandwich of Food for the Soul, covered festival highlights at The Malthouse on Saturday 7 June: The Hunters & Pointers with Kristin Berardi, Mike Nock with Laurence Pike, and the Julien Wilson Quartet with Barney McAll.

The final highlight for me of the Melbourne International Jazz Festival 2014 was the Hamer Hall outing of duets by Chick Corea on keys and Gary Burton on vibes. As they played I thought about what made this performance so successful; what was evident in their playing. It seemed to include mutual understanding and appreciation, subtlety, fun, finesse, dexterity, delicacy, intricacy, splendour, responsiveness, lightness of touch, rapidity, clarity, virtuosity, luminosity, melody, translucence (of vibes notes) and maybe even whimsy. As I posted elsewhere “there was plenty of pixie dust flying from the vibes”, especially in Crystal Silence, which seemed to be a contest to see who could play with the lightest touch.

Corea and Burton had been here before, but that did not detract from the enjoyment of this outing. Their concert seemed a fitting end to a festival, which artistic director Michael Tortoni described as “the broadest, most inclusive ever”.

So, there were plenty of highlights at the MIJF 2014. Two innovations — the excursion to Melbourne’s west and the use of The Malthouse — were a great success. Artists visiting from overseas did not dominate the highlights, in my view. It’s fair to say that the mix was eclectic, taking in The Drumhedz and Bates’ take on Charlie Parker, but clearly the MIJF under Tortoni allows plenty of scope for the Melbourne Jazz Fringe Festival to reclaim some of the “out there” ground if funding becomes available in future years.