A SANDWICH OF FOOD FOR THE SOUL

Mike Nock at The Wheeler Centre

1pm: A Conversation with Mike Nock

Mike Nock handed me the angle to this post about his Wheeler Centre conversation and the three gigs to come later, although I did not pick up on how it would work until the evening. He spoke about a lot of aspects of music in this hour, including the fact that he once sang at the London Palladium, but more about these topics later if time permits.

I want to highlight a couple of Nock’s statements about jazz. He said jazz is “about connecting with people emotionally”. Later he said, “It is food for the soul — that’s what jazz is.”

I was happy to hear a musician of Nock’s stature say this, because I am at times moved to write food-for-the-soul-type comments about the music that moves me, although I am wary of slipping into sentimentality and aware of reactions to what’s played being subjective. If I do write thus about a musical experience I seem to be nagged by an inner voice wanting to dismiss this sort of talk as emotional claptrap and asking what it really means to say something “feeds” the “soul”.

That’s a topic for later, perhaps, but as it turned out, the Malthouse gigs later that evening — ironically, perhaps, the two before and after Nock’s gig with Laurence Pike — prompted me to want to use that emotive description.

Mike Nock at The Wheeler Centre

First on stage were members of Hunters & Pointers, who had not performed together for 21 years. They were John Hoffman on flugelhorn, Graeme Lyall on saxophone, Tony Gould on piano, Ben Robertson on double bass and Tony Floyd on drums. How much talent can you fit on one stage?

From the opening notes I just wanted to find better words than smooth to describe this quintet’s work. Like a well-oiled trombone slide these luminaries of Australian jazz just let the notes slip into the auditorium and hang there in space.

I often prefer tension-filled music that’s prickly and sharp-edged. But this was sublime stuff that I knew would draw out that stuff about “food for the soul”. Luckily, I had Mike Nock’s words to provide support.

After Just Friends, my favourite vocalist Kristin Berardi joined Gould for Body and Soul, then the band for a vivacious rendering of Tea For Two. In I’ve Grown Accustomed to Her Face, Lyall delivered some super smooth alto sax that was fat and furry, Floyd’s work on brushes and mallets was superb, and Gould’s solo was a treat. This piece drew a loud “Yes” from the audience and justifiably so.

In mid concert there was some horseplay and even a joke, before the set’s highlight, for me — Berardi’s performance in Spring Can Really Hang You Up the Most. Her vocals in this were eloquent, sensitive and yet not sentimental at all. The audience forced an encore, It Could Happen to You, that featured a solo with Robertson really jumping and evolved into a really swinging number.

This was food for the soul part one. 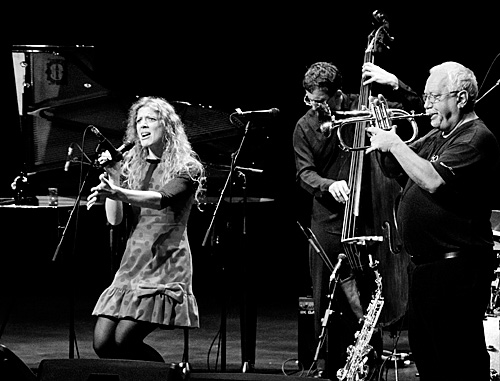 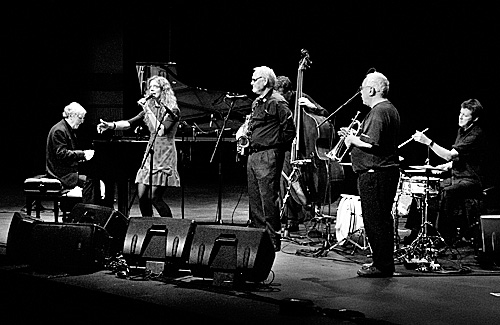 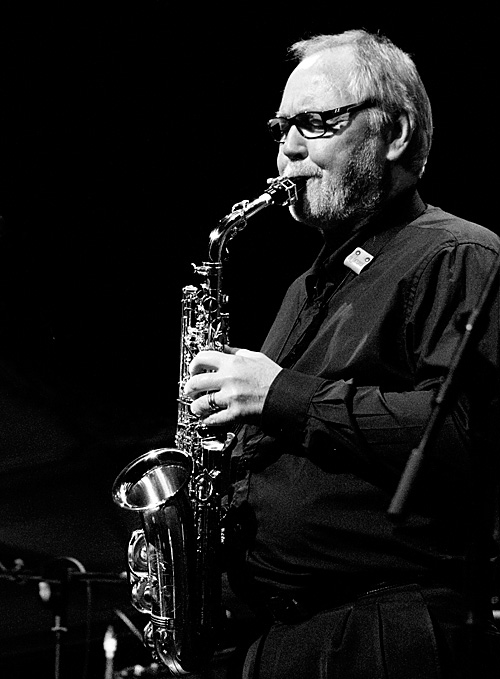 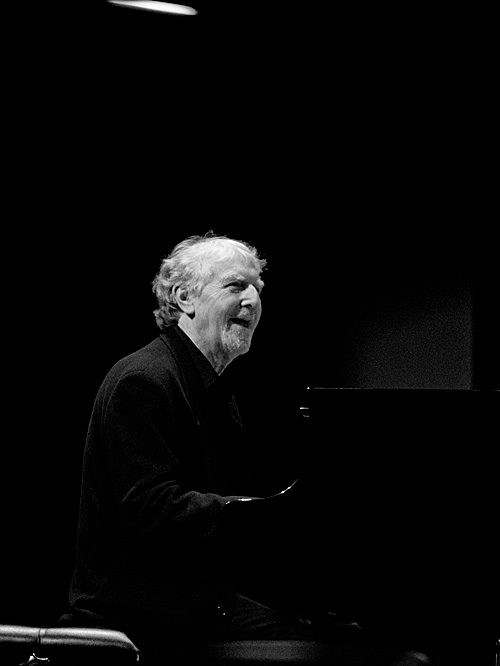 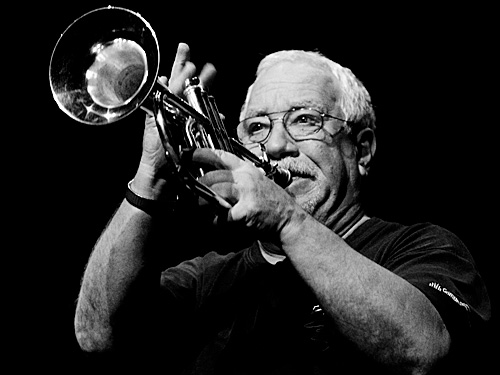 As mentioned, this set had a different sort of appeal. Immediately I was struck again by Nock’s ability to create an air of reverence that is totally engrossing, yet does not require many notes to be played.

Pike was extremely busy at times on drums and percussion, playing almost as if possessed — but in a muted fashion. (What is conveyed comes as much from what he holds back as by what he actually does, if that makes any sense. An example is the vigour with which he goes to hit with brushes, yet hardly any sound emerges.) I was reminded of a Cannonball Adderley live gig in which you can hear the audience respond to what’s hinted at by the rhythm section.

Nock built tension and focus, commanding attention. As the set progressed, both Pike and Nock were tinkering at sounds, producing electronic static along with rattles and the shaking of bells, plus short flurries of piano notes between pauses. I thought there was a lot in common with the Alister Spence Trio‘s set of the previous evening.

I was not moved to describe this as food for the soul. My appreciation of the set was more dispassionate. The appeal lay in the fascination of a changing landscape. 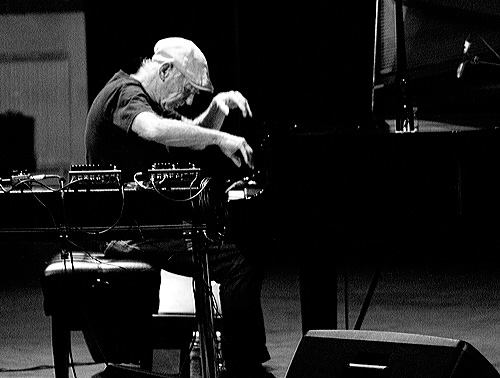 The finish of this narrative is probably fairly obvious by now. Julien Wilson on clarinet and tenor sax joined Barney McAll (over from New York) on piano, Jonathan Zwartz on acoustic bass and Allan Browne on drums and cymbals to complete a dream line-up.

I had lost any urge to dash off to Bennetts Lane to hear Django Bates Beloved play Charlie Parker. Another time. I wanted — wait for it — food for the soul, and this was the quartet to provide exactly that.

They began with Ellington’s The Feeling of Jazz, then Deep Night followed by a new ballad, Bernie, in honour of the late great Bernie McGann. Weeping Willow followed as a tribute to recently departed Gil Askey. There were great solos by Browne and McAll in this. In particular I loved how the quartet ended this and the previous piece, allowing them to gradually slip away. It was appropriate, I thought, to have such peaceful departures for these two characters of jazz.

From the opener, Wilson showed again that he continues to play with assurance and to draw on deep inspiration that is clearly a sustaining force.

They played another new piece, Rain Man, and ended with Farewell off the album This Is Always as an encore.

McAll seemed attentive rather than flamboyant on the night. He later said how much he appreciated Browne being so zen at the drum kit.

This concert was good for the soul. It was the perfect ending to the penultimate day of MIJF 2014. 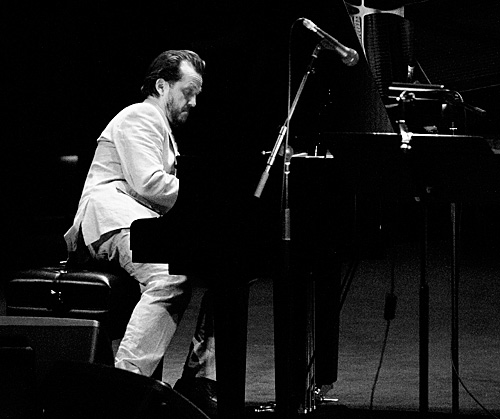