GOOD VIBE AS FESTIVAL BRANCHES OUT 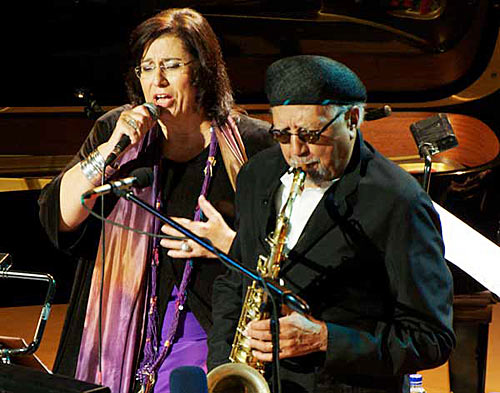 The best time to judge the worth of any music festival is when it’s all over, but I’ll go out on a limb and say that there is a good vibe about this year’s Melbourne dip of the collective toe into the diverse waters that link to jazz.

In a preview to the 2013 festival, I wrote that, “For a number of years now the MIJF has set out to broaden its appeal. This year’s program is no exception …” That trend continues in the 2014 program, with artistic director Michael Tortoni describing it as “the broadest, most inclusive ever”.

Some have commented favourably on Tortoni’s willingness to venture farther than is usual into the realms of world music this year. I would say that there is an unashamed willingness by the MIJF to provide a broad spectrum and, it is fair to assume, to let some of the popular events in large venues help pay for smaller gigs that may have much more appeal to dedicated followers of the rich jazz tapestry that is always on show in this town.

It’s important that this bid to attract a wider audience does not water down what’s on offer in order to put bums on seats, but it seems there is still plenty for hard core fans, albeit not such rich pickings on the fringe as when Sophie Brous had a role in programming. The 2014 program seems to reflect a festival comfortable with bring popular artists and also musicians who will be sought out and valued by smaller numbers of patrons.

Among the big changes this year are the advent of concerts in the Malthouse — two gigs a night with the second a double bill — and the inclusion of Uptown Jazz Café as a club venue for the first time, hosting some quality trios, quartets and a sextet. It’s great to have Sonny Rehe and the Uptown staff aboard.

The other significant change is that for the first time there will be some musical events in Melbourne’s west, an area with which Tortoni is familiar.

As always, full details of the program are available on the festival website. Ausjazz provides the following pointers to likely highlights.

Anyone who heard Charles Lloyd in 2010 will want to tap into his spiritual quality as performer or in conversation. The saxophonist, flautist and taragato player will perform at Melbourne Town Hall in The Greek Project with vocalist Maria Farantouri, presenting works by Lloyd, Theodorakis and the Greek Suite.

Lloyd will also bring his Sky Trio (Reuben Rogers bass, Eric Harland drums) to the Melbourne Recital Centre in an Australian premiere. This concert, opening with local group Omelette, is not to be missed, although I will be torn because it clashes with an exciting world premiere of PBS Young Elder of Jazz Commission winner Tilman Robinson’s The Agony of Knowledge at Bennetts Lane Jazz Club. Lloyd also joins Monash University music students in a gig at the MRC Salon.

Hamer Hall is the venue for the celebrated collaboration of keyboardist Chick Corea and vibraphonist Gary Burton.

It’s hard to know whether the Palais Theatre audience will comprise fans of Hollywood tough guys or Frank Sinatra when they flock to hear Robert Davi provide a portrait of Ol’ Blue Eyes. Davi appeared with Sinatra in the 1977 film Contract on Cherry Street, so he knows how to swagger.

The news is already out there, but if you fancy big bands, nothing comes bigger than Glenn Miller Orchestra, which will fill the Hamer Hall Stage with no fewer than 38 musicians, singers and dancers to perform hits such as Moonlight Serenade, In the Mood and Chattanooga Choo Choo.

Soul will come to the MRC when Mary Stallings — who toured and recorded with Dizzy Gillespie, Cannonball Adderley and Count Basie — returns to the city she visited in 1959. Expect swinging standards and moving ballads.

Flamenco will have plenty of fans when Jorge Pardo on tenor sax and flute performs at MRC in the trio Huellas, after the superb Sylvan Coda by Chris Hale and other Australian artists, including the foot-stamping Johnny Tedesco, who has been a hit with audiences at Bennetts Lane and Stonnington Jazz.

Wistful romanticism will be the feature when jazz vocalist Fem Belling brings to life the late Blossom Dearie in a concert at The Malthouse.

Rolling Stone described Larry Carlton’s work on Steely Dan’s Kid Charlemagne as one of the greatest rock guitar solos of all time. The “Titan of Tone” will perform with a quartet at MRC and hold workshops at VCA, one of which will be open to the public. Five-piece Here and Now will open.

A regular in Australia, saxophonist Joshua Redman will perform his ever-changing repertoire in a quartet at MRC, after the Joe Chindamo Trio.

This is turning into a long post, but now it’s time to move on to some MIJF gigs that are a little less mainstream. Watch this space.