DON’T LET YOUR FRINGE DOWN 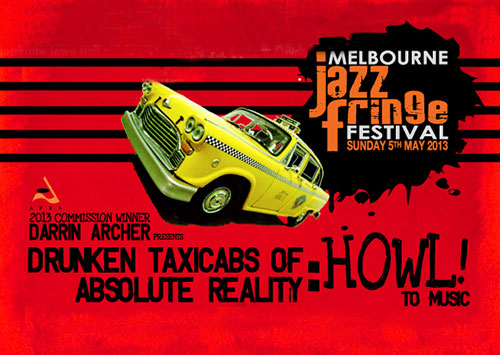 Lovers of popular music, including fans of classical and opera, may regard many incarnations of jazz as being on “the fringe”. Purely in terms of bums on seats at concerts, that is probably a reasonable view. But anyone familiar with the improvised music on offer in Australia knows there are gigs that sit on the fringe within the broad genre.

It’s not worth wasting energy on where to draw the line between more mainstream jazz and material that’s “out there”. But some context can be helpful. Martin Jackson, who runs the Melbourne Jazz Co-operative, has suggested that patrons of gigs sponsored by the co-op should keep in mind that the diversity of music on offer means they may find some outings a challenge.

I can recall a few occasions on which people looking for some live music after dinner have lobbed at Bennetts Lane Jazz Club not knowing what to expect, then discovered that what’s on offer on the night does not appeal to them. On the other hand, anyone who finds the way to the Make It Up Club at Bar Open in Fitzroy is likely to expect performances that stretch the boundaries of music.

Organisers of the Melbourne Jazz Fringe Festival have had to do some hard thinking in recent years about the challenges of staging a festival with limited resources, declining patronage and arguably some encroachment on its turf by the Melbourne International Jazz Festival. If anything the MIJF is now leaning to the more accessible side of the spectrum, but under Sophie Brous it ventured into experimental music with the hugely popular day-long multi-stage Overground at Melbourne Town Hall, which was similar in concept to the MJFF’s previous Big Arse Sundays.

That’s hardly a comprehensive summary of the issues facing the hard-working MJFF organisers, but the upshot is that this year’s festival will consist of one afternoon of concerts grouped around the 2013 APRA Commission Concert, which has become a significant landmark for the festival and in Melbourne’s annual jazz calendar. For anyone unfamiliar with this concert, it’s worth saying that each year APRA funding enables MJFF to invite proposals for a commissioned work that breaks new ground. The chosen work is given its debut airing during the festival. These are always innovative and interesting.

This year Darrin Archer has chosen to focus on Allen Ginsberg‘s poem Howl, using modern composition and improvisation to explore the sex, drugs and spirituality of the beatnik as a sonic landscape. If that sounds weird, it probably will be, but surely that’s what we want from a MJFF concert. The work, titled Drunken Taxicabs of Absolute Reality: Howl to music, will debut at 5.30pm.

But the music begins at 2pm with solo piano performances by Steve Grant (a multi-instrumentalist who is often playing cornet or accordion) and Marc Hannaford (who will soon leave for New York to take up a fellowship at Columbia for a PhD in music theory). It will be a treat to hear these pianists at work solo.

At 3pm drummer Ronny Ferella will usher on his band IshIsh, which has its roots in the music of drummers Eddie Moore and Ed Blackwell’s groups, and the music of Don Cherry and Ornette Coleman. The line-up has varied since the ensemble’s first album, but for the latest CD End of a Line it featured Eugene Ball trumpet, Jordan Murray trombone, Julien Wilson saxophone, Mark Shepherd bass and Javier Fredes percussion. A special guest for this outing will be Stephen Magnusson on guitar.

At 4pm, expect things to move a little further out there as Scott McConnachie on sax joins Erkki Veltheim on viola and Ren Walters on guitars in a trio that emphasises process of creation rather than any planned result.

Tickets for this biggish arse Sunday cost $35/$25 and are available at the door or online or via Northcote Town Hall website.

Don’t let your fringe down. Be there.