The line-up for Cup weekend this year at Wangaratta includes enough expatriate musicians to suggest our local performers have all jumped ship in over the years. That’s far from the truth, of course, but the festival does have the pull to entice many musicians back for a visit.

Pianist Barney McAll will travel from New York to perform with Andrea Keller in a work for two pianos, vibraphone and 16-voice choir led by Gian Slater. Then Malaysian-born bassist Linda Oh, who grew up in Perth and has since moved to New York, will bring a quartet as well as performing duets with  Slater. And pianist composer Walter Lampe will travel from Amsterdam — his home of 20 years — to perform in a trio. 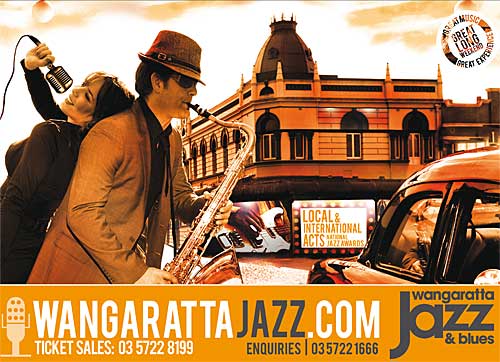 Wangaratta also reunites overseas musicians with Australians with whom they have collaborated. So Adam Simmons (saxophones etc.) will be joined by Denis Colin (bass clarinet) from France, Benjamin Moussay on keyboards and Chander Sardjoe on drums to celebrate their collaboration as La Societe des Antipodes.

And the great and inspiring Mike Nock, whose history takes in his native New Zealand, then time in Sydney, Boston, San Francisco and New York before he settled again in Sydney, will be reunited with bassist Barre Phillips, with whom he played in New York. Their improvised duets must not be missed.

But many of the highlights at the festival will be performances from Australian artists. The Australian Art Orchestra, which was founded by Paul Grabowsky and made its debut at Wangaratta in 1994, will include local luminaries Paul Williamson and Eugene Ball on trumpets, Jordan Murray and James Greening on trombones, Ian Chaplin and Jamie Oehlers on saxophones, Grabowsky on keyboards, Geoff Hughes on guitar, Phil Rex on bass for its collaboration with visiting trombonist Josh Roseman. There is a heap of creativity in that list.

Grabowsky and Oehlers will join Dave Beck on drums for a wholly improvised trio outing that will knock our socks off for its originality and ability to take us on a journey that is cohesive, developmental and has never a dull moment. That’s what they did at “Wang” in 2008 and I’d expect no less this time.

Saxophonist composer Sandy Evans, who inspired a rapturous review from Ausjazz blog for her sextet’s recent album When the sky cries rainbows, will add Phil Slater on trumpet, James Greening on ‘bone and Alister Spence on piano to her trio with Brett Hirst (bass) and Toby Hall (drums) to play the  recorded suite live. Don’t miss it.

And for the first time at Wangaratta, Evans and Grabowsky will perform as a duo, something they have often talked about but never achieved.

Another first-time duo that promises to be a highlight of the festival will be Brisbane saxophonist Elliott Dalgleish in a twosome with Melbourne drumming great Allan Browne. Bring it on.

James Muller — one of John Scofield‘s favourite guitarists — will play with his trio (Alex Boneham on bass and Ben Vanderwal on drums) as well as featuring in a trio with Thirsty Merc bassist Phil Stack and Tim Firth on drums. Thirsty Merc has a gig at Mulwala on the Saturday, so Adrian Jackson made the most of that to invite Stack to visit Wangaratta.

Trumpeter Paul Williamson‘s Inside Out will feature Marc Hannaford on piano, Sam Zerna on double bass and James McLean on drums.

For something a little off the beaten track, definitely make sure you catch Perth’s Memory of Elements, with Oehlers on tenor, Carl Mackey on alto, Tom O’Halloran on piano, Simon Jeans on guitar, Pete Jeavons on bass and Ben Vanderwal on drums.

Other home-grown highlights will include the Sydney powerhouse Mike Isaacs Resurgence Band (with Muller on guitar, Matt Keegan on reeds, Hirst on bass and Firth on drums), the Daniel Gassin Sextet (see Ausjazz blog’s review of its eponymous album), the David Rex Quartet (with Rex on alto, brother Phillip on bass, Grabowsky on piano and Craig Simon on drums), the warm and wonderful Howard Cairns Quintet (with Ball on trumpet, Don Jordan on ‘bone, Adam Simmons on sax and Mike Jordan on drums) and the swinging New Sheiks (with bassist Leigh Barker, Eamon McNelis on trumpet, Don Stewart on trombone, Matt Boden on piano and Alistair McGrath-Kerr on drums, and vocals by Heather Stewart).

And then there’s  the National Jazz Awards, with all those talented Australian drummers. (See Extempore’s interviews with the finalists by Miriam Zolin.)

If you’ve made it this far, you probably need to rest before booking your ticket to the Wangaratta Jazz and Blues Festival for 2011.