PROTEST: Melbourne jazz musicians rally at the Victorian Parliament on Wednesday, 20 February 2013 in support of the Melbourne Jazz Co-operative

Jazz at the Victorian Parliament

The music was a tad bleak, but the mood was upbeat. As the strains of St James’ Infirmary wafted across from Spring St to the Parliament of Victoria, television cameras began filming and passers-by wondered what all the fuss was about.

The assembled jazz musicians knew what they were about. They knew the score. If Arts Victoria‘s decision not to fund the Melbourne Jazz Co-operative was not overturned, many of them would be walking away from live gigs with only the door takings — not a lot to take home for all that practice and two sets of live music performed for small, but appreciative audiences.

There were three sets to this outing. First, Labor MP Martin Foley would receive the petition from MJC supporters urging the Government to reconsider the halt to funding. MJC CEO Martin Jackson handed it over on the steps of Parliament, watched by supporting Greens MPs Sue Pennicuik and Colleen Hartland.

Next, the musicians and fans heard speeches from renowned performer, educator and musicologist, Dr Tony Gould AM, Greens Arts spokesperson Sue Pennicuik and Martin Jackson. These were followed by more live music from the large ensemble assembled on the Parliament steps.

The final set took place in the Upper House, where politicians are well and truly used to improvising. Eastern Metropolitan MLC Shaun Leane spoke to a resolution calling on the Baillieu Government to reconsider its short-sighted decision to remove its support of the Melbourne Jazz Co-operative. It was a long and rambling speech — I suppose it could be described as a ballad with plenty of emotion, heartfelt but not delivered as tightly as the audience in the gallery may have wanted.

Western Metropolitan MLC Colleen Hartland followed with a short piece that exhibited lots of clarity and threw out some good questioning notes — we felt she was on track throughout the piece.

But the improvisational standout of the session came from Eastern Metropolitan MP Andrea Coote. She opened with a melody that appeared to be praising the MJC, albeit with a little condescension to add spice, but rapidly set off on a wandering and deliberately obfuscatory ramble that rendered the Leane solo focused by comparison.

Ms Coote seemed to pick up on some chord changes from a “White Night Festival” and proceeded to re-work these to an extent that any relevance to the plight of the MJC was unrecognisable. Some in the audience may even have obtained the impression that her performance was designed to distract us from the original point of the piece or at least to encourage listeners to exhaust their attention spans or lose sight of the original, tension-filled and dissonant chords that began the outing.

Clamour from across the chamber also did little to maintain focus, with the Speaker content to allow mayhem that would not have been out of place at some of the more out-there MJC gigs.

Audience applause was not forthcoming, though a certain Wilde character in the gallery was admonished after an audible snicker in response to Ms Coote.

This set ended abruptly when a stream of MPs who must have been enjoying a late breakfast filed in for Question Time. I wondered whether MJC gigs ought to finish in a similar fashion, with punters able to quiz Allan Browne or Marc Hannaford on how that strange dance they do really started and what it all means.

Meanwhile, the MJC is hanging out for Premier Baillieu to do some improvising when it comes to arts funding, perhaps starting with a jam session in which he plays solo in a sax play-off against Martin Jackson. My money’s on Martin.

Some pictures of the protest are below.

PS: No offence meant to the White Night Festival. It’s just that Ms Coote was supposed to address the MJC funding issue. 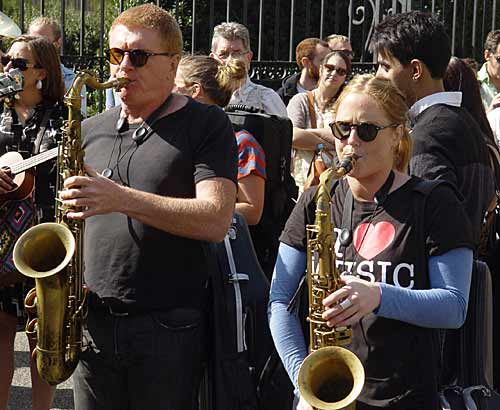 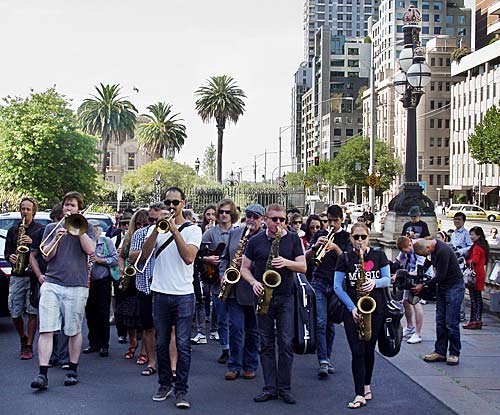 On the move: Jazz at the Victorian Parliament 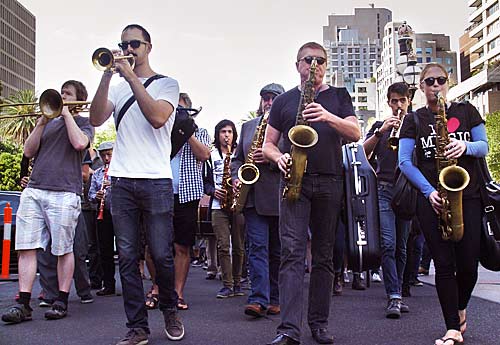 Strength in numbers: Jazz at the Victorian Parliament

Storming the steps: Jazz at the Victorian Parliament

Process: The petition is accepted. 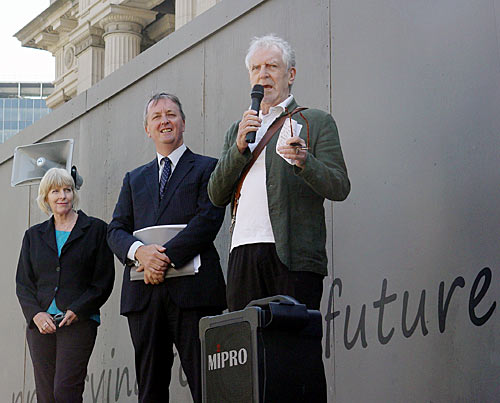 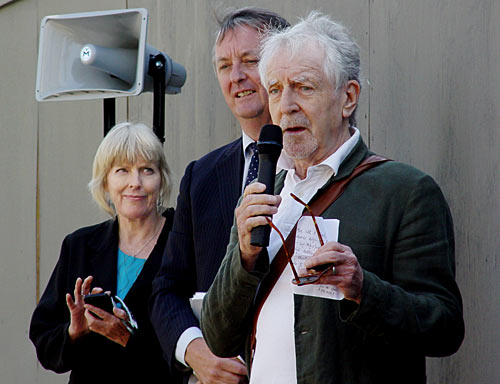 This is a disgrace: Tony Gould adds his considerable support to the protest. 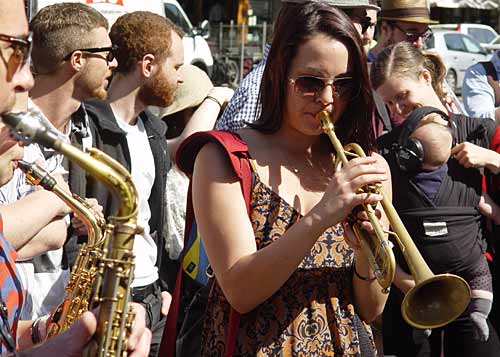 What a blast: Jazz at the Victorian Parliament 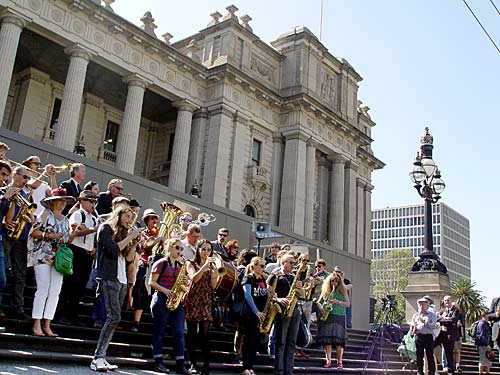 Gospel at the finish: Jazz at the Victorian Parliament

This entry was posted in ARTICLES. Bookmark the permalink.