Two MJFF festival outings this year were unprecedented — not because of their content but rather their location. Instead of being held in the central city area or to the north, in Brunswick or Northcote, these gigs were in Footscray, at the popular Dancing Dog Cafe and Bar. It is a great space for small ensemble performances, so it was a pity that not too many of the people who often bemoan the absence of live music venues out west managed to make it out on the night. Clearly some work needs to be done via the local networks.

(The second way out west gig was on Saturday, with percussionist Nat Grant and Kewti, but more of that when time permits.)

Some chemical elements can exist in two or more different forms, known as allotropes. I’m assuming this ability to assume varied forms is the reason for trumpeter and composer Peter Knight — best known for his role in the popular and creative band Way Out West — chose to name his solo performances with that term. He uses a program on his laptop called Ableton Live, which he uses to process live input — as he puts it, for “live sampling and processing of micro sound worlds created using the trumpet”.

As can be imagined, it is a totally different performance each time and quite another thing altogether from hearing PK on trumpet in a band. Yet there are echoes of the gigs at the Charles Street Bar (now Touks restaurant) in Seddon many years ago, when PK played some mesmerising small group improvisations with Lucas Michailidis on guitar and Frank Di Sario on bass.

Knight’s set was fairly short and consisted of an evolving soundscape best listened to, IMHO, with eyes closed.

Motion at the Dancing Dog

This set was a real highlight of the MJFF for me and it is a great pity that a larger audience was not there to hear these pieces. The quintet played some new material and definitely whet my appetite for the album that will emerge from a week’s recording session at Allan Eaton Studios in St Kilda. 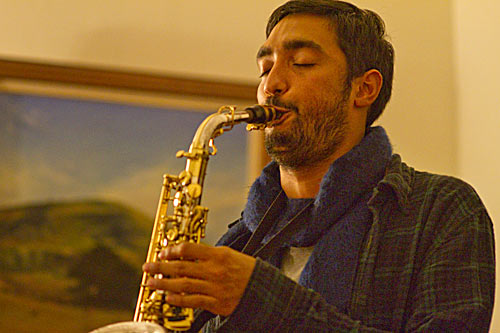 They played Liberty Stole My Shoes, Morsel, Both Hands, Blank (ie unnamed), New Nuts (they were eating cashews and almonds at the recording session), Jigsaw and Little Things. Peter Knight on trumpet and laptop sat in for the last two, making a contribution that seemed to suit admirably.

I reviewed Motion’s album Presence in August 2010, referring to “expressive ballads … augmented by passages of quiet strength and slow-built tension, unexpected turns and robust, piano-driven rhythm“. At the Dancing Dog I felt variously that the music was surreal, mesmerising and trance-like, with the transitions having that prized fluidity that avoids any feeling of obligatory soloing or virtuosic excursions.

In particular I loved the level of concentration in the band, evident throughout but particularly striking in the final piece, Little Things, when the interaction between Sam Zerna on bass and Berish Bilander on Nord was tangible and captivating.

I think these pictures help to tell the story of this ensemble and this outing. The musicians, all of them displaying excellent musicianship, seemed to be utterly immersed in their journey. Motion is a band to catch up with when you can, particularly as Brooks is heading to Berlin in the months ahead.

I look forward to the new recording.

Plaudits to Peter Knight for pushing the cause of live music  from the Fringe out west. May it continue. 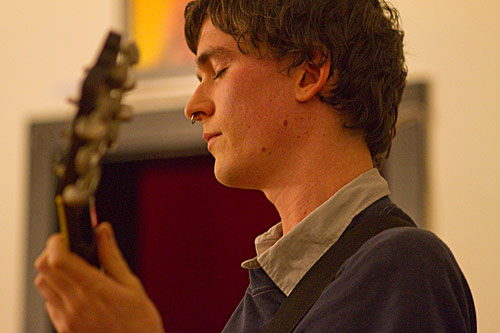