Bringing the Band of Five Names to Melbourne was a coup for the Melbourne Jazz Fringe Festival and bound to be a highlight of a program that included the premiere local performance of Andrea Keller‘s Place and a commission work by Fran Swinn featuring aerialist Rockie Stone. But what is the attraction of this band? What is the nature of its appeal? 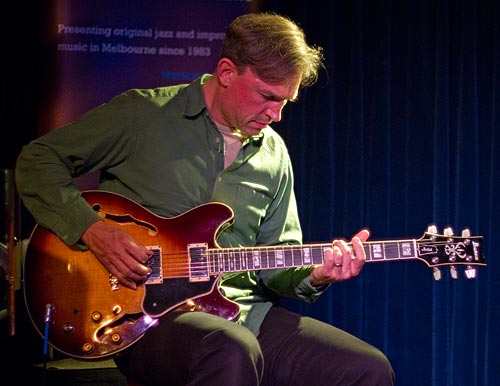 I welcome suggestions, because answers will differ depending on the listener. To me it has to do with an unfolding story, a sense of development, and the exciting prospect of not knowing what will emerge. That could be said of a lot of improvised music, but in the case of this band there is a real feeling of it being evolutionary in a gestational way. It’s not quite the same as listening to The Necks, perhaps because there is an absence of expectation of any climactic outcome. Audiences love that anticipation in a Necks gig that what may start slowly will heat up and provide that carthartic pleasure or relief that comes from tension slowly building and inviting release. 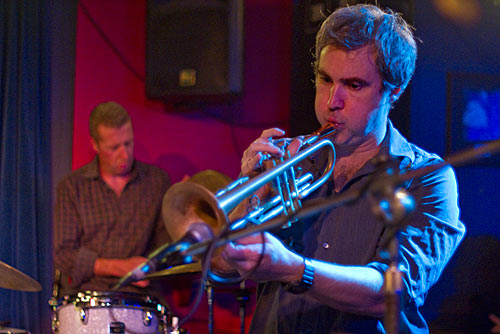 The Band of Five Names seems to put us right into the moment by taking away the “what if” factor and inviting acceptance of what will be. We care not whether it is planned or unplanned, whether there will be catharsis or not. The band draws us into what is happening, what is emerging, and keeps us there because it is so interesting. And that’s the key second factor in the appeal. Without any apparent stress, the musicians are watchful — not unusual at all, of course, in any improvised music — and responsive, but relaxed about that. Maybe they know where they are going because they’ve been there, or somewhere similar, a hundred times before; maybe they don’t know what is going to happen until a series of notes from one member of the band sets them on a new track. I don’t care. It’s interesting because you can watch that responsiveness at work. If it’s like anything it is maybe akin to hearing Lost and Found, with Paul Grabowsky, Jamie Ohelers and Dave Beck. Or GEST8. 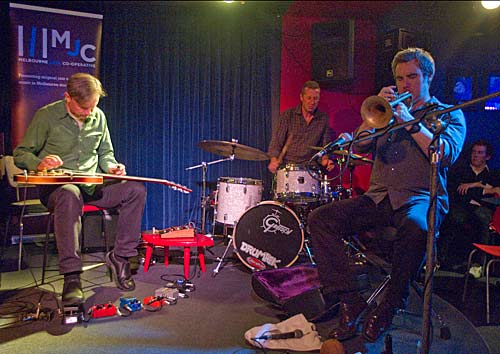 Three of the Band of Five Names

So what sorts of musical moments made up the first set, which was titled Curtain? A fragmentary account would recall Dewhurst nursing or coaxing notes from his guitar, notes that evolve into a high, sustained ringing. Slater breathes through his horn into the mic, removing slides at times to adjust the air flow. McMahon is plucking at the piano strings, sending twangs into the room. Slater lets his note gradually develop intensity, force and penetration, with Barker gentle at the back. There is a trumpet break-out, a flaring up of trumpet. There is a guitar break-out, a fiery surge of strings. McMahon mumbles gently on the keys. The trumpet again exudes breaths. McMahon is so careful with his notes, as if he’s tiptoeing. Momentarily the drums and cymbals swell and die away. There is a period of what feels like reverie.

I was only able to stay for the first set, which I therefore believe was far too short — probably not much more than 30 minutes. That was a great pity, but I was sure the second set would be longer and most likely even more fulfilling that the first. 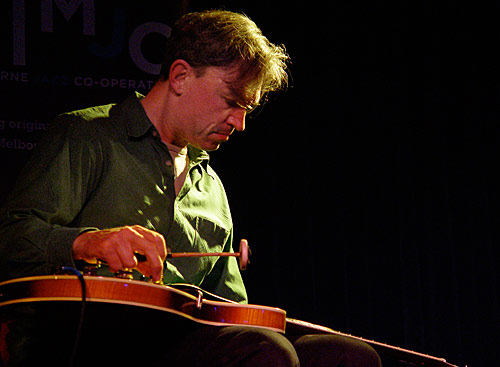 There was a reasonable crowd at Bennetts Lane in the big room, but the Band of Five Names deserves more. Let’s hear them in “Melbs” (scare quotes used courtesy of Tim Stevens) very soon. Well done MJFF, the Melbourne Jazz Cooperative and, to be fair, the band.