IF ON A SUMMER EVE AN ENSEMBLE

If On a Winter Night a Traveller in December 2012

It’s very late to post about a performance the day before it’s taking place, but tomorrow’s recital in the Salon deserves attention. I’ll be working and can’t be there, but I highly recommend that anyone able to make it to the launch of this album should go.

Network of Lines is Tilman Robinson‘s debut album performed by a nine piece electro-acoustic ensemble of Melbourne musicians. Written in response to the Italo Calvino novel If On a Winter’s Night a Traveller, the piece derives its form from the novel’s distinctive narrative structure. 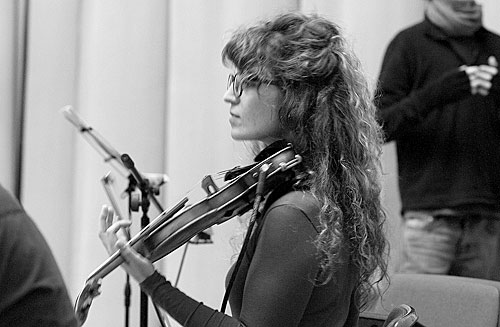 The work was commissioned by the Melbourne Jazz Fringe Festival and demonstrates again how important that festival’s commissions have been in adding substantial compositions to the Melbourne jazz repertoire. 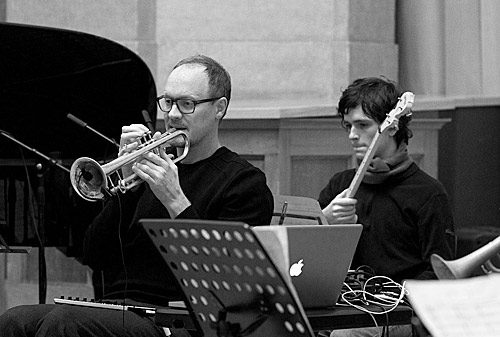 As these images record, the work has been performed previously twice — first on 13 May 2012 at Northcote Town Hall as part of the MJFF and second on 4 December the same year in Abbotsford.

On both occasions the performances were intricately constructed and exquisitely executed, demonstrating the talents of the ensemble members and the care Tilman Robinson had taken in constructing the piece. 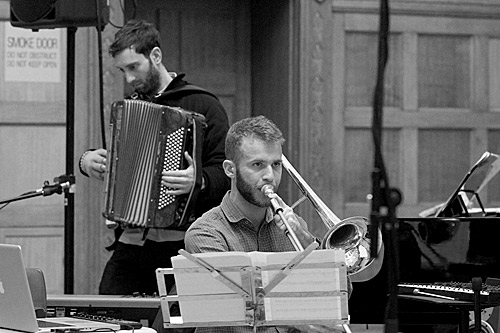 Xani Kolac was on violin during these outings. Erkki Veltheim is featured on that instrument in the recording.

The work is adventurous, exploring a a range of textures, timbres and effects, including laptop work by Peter Knight and Tilman Robinson. 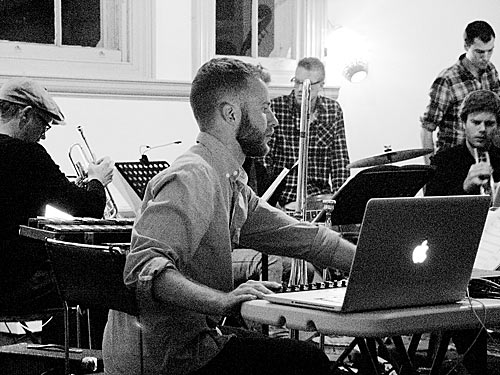 The moods created are diverse. There are slow, dreamy parts, as well as classical and hymn-like interludes, passages of building tension and sudden, dramatic outbursts.

There are sweeping vistas. There is gradual fragmentation. 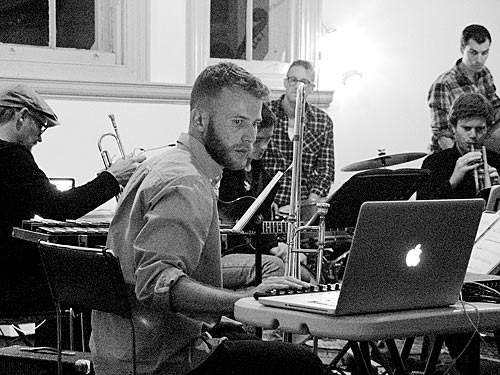 There are percussive nibblings, pizzicato incursions and wailing sirens from the strings. Horns — trombone, trumpet and flugelhorn — are resplendent, then muted, then soaring. Notes are bent. Drums break in, break out.

The album closes with Robinson’s arrangement of Sean O’Neill’s composition What Story Down There Awaits Its End? It is a fitting end to the journey.

The Salon at MRC is an ideal room for this album launch. I am sorry to be missing it.

Network of Lines is also available through theListen/Hear Collective.

Miriam Zolin of Extemporé/AustralianJazz.net has posted an interview about this work and its inception.

Now, more than ever, seems it fit to have a Melbourne jazz fringe

Anzac Day seems a good opportunity for reflection. A week or so back I was gearing up to post about the coming season of jazz festivals in Melbourne and the need for us to get off our couches and venture into the wintry nights to hear live music, prodded or encouraged perhaps by a surge in publicity about the delights of improvised music. I reckoned that the first cab off the rank — before Stonnington Jazz (May 17 to 27) and the Melbourne International Jazz Festival (June 1 to 11) — would be the Melbourne Jazz Fringe Festival. 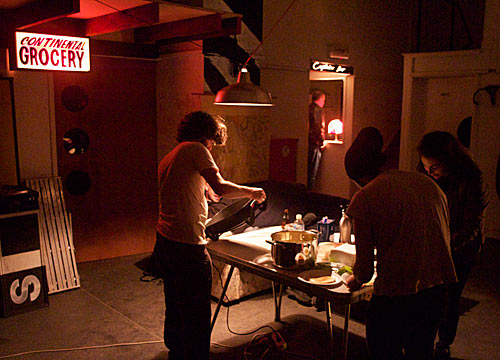 Fond memories of Fringe: A man called Miles makes pancakes on an electric frypan while a patron of the Captain's Bar requests a libation.

Fond thoughts came to mind about favourite Fringe moments … the sausage sizzle at Fitzroy Bowling Club where your snag is handed over by one of your favourite musicians; the ache in the bum that you notice only at the end of Big Arse Sunday when you’ve listened to eight hours or so of music; the challenge of staying in the room long enough to appreciate the subtleties of what seems like noise; the growing sense of anticipation and excitement as the APRA Commission work by Fran Swinn, Gian Slater, Erik Griswold or Ren Walters is about to unfold; the fun of following fellow patrons through city streets from a performance in an art gallery to another in which a violinist appears on a balcony and an orchestra of laptops plays below; the adventure of heading along a dark light industrial street to a dimly lit warehouse where a man called Miles makes pancakes on an electric frypan, the tiny Captain’s Bar serves enticing libations and there’s an iPhone mash-up making “music” at night’s end; the thrill of discovering Sandy Evans playing in a band that sets the pulse racing … Need I go on? Anyone who has been at these gigs will identify with the vibe.

With these thoughts in my head I was gently salivating as I looked up my calendar and saw the listing, gleaned from a useful jazz gig guide, showing that MJFF would run from April 23 to May 2, 2012. Then it dawned on my feeble brain that there had been no mention of the program for this year’s Fringe.

A word with drummer and festival administrator Sonja Horbelt revealed there was reason for concern. Sonja said Fringe is “re-evaluating and quite sponsorless this year”.

“Over the past year in particular we’ve felt the impact of Melbourne being “festival-ed out” and of the Melbourne Jazz festival drifting closer to what we believe to be the intrinsic identity of the Jazz Fringe Festival. It is flattering to think the main festival is drifting closer to what the Fringe is, but on the other hand it has left us searching for a definition of Fringe and a more focused purpose for the festival,” Sonja said.

“The Board has decided to use 2012 to take stock of the essential fabric of what is happening on the Melbourne scene and to re-evaluate the true purpose of the Jazz Fringe and its meaning for our community. We don’t have any major funding sponsors this year, aside from APRA for the composer award, so the Commission event will be the only event we stage.”

The news that the Commission concert would go ahead was good. The rest was a disappointment, not only because there would be less of the adventurous music for which this festival is known, but because there would be, essentially, no MJFF this year. I lament the loss of sponsorship and I lament the loss of a much-loved and vital part of Melbourne’s jazz and improvised music scene.

The irony is that Sophie Brous, who expanded Melbourne’s international festival into areas that had been Fringe territory, is no longer at the helm of MIJF, so in a year that could have seen Fringe filling in where the popular multi-stage experimental extravaganzas at Melbourne Town Hall left off — albeit on a necessarily smaller scale due to budget constraints — there is just one event rather than a full-on festival.

I am not saying the Fringe organising committee had any choice. Nor do I think it is a bad thing for the MJFF to re-evaluate its purpose. But I am hoping that this vital and valuable festival emerges phoenix-like from the ashes in 2013, because it is worth far more than just a collection of gigs on a calendar. MJFF can provide the special, quirky experiences mentioned above, which more formal festivals may not find so easy. It is surely also the ideal place for emerging exponents of new approaches to music to try them on audiences willing to be shocked, even horrified, but often exhilarated. And established artists can try new line-ups or alternative approaches.

That’s about it for the rant. The message: Keep the fringe in Melbourne jazz in the years ahead. May sponsors everywhere — apart from APRA, extempore, Melbourne Jazz Cooperative and Northcote Town Hall — hear and heed that message.

Sunday, May 13 from 5pm at Northcote Town Hall

Robinson’s new work is inspired by Italo Calvino’s 1979 postmodern novel of that name. Robinson is a composer, arranger, trombonist and sound artist whose works are not easily categorised. He graduated from West Australian Academy of Performing Arts in 2009. He has received commissions from such jazz and classical ensembles as the Australian Brass Quintet, the WA Youth Jazz Orchestra, Fused and the Arundo Reed Quintet. He has been an arranger for Sinead O’Connor and was commissioned to write for Orchestra Victoria’s Seven Songs to Leave Behind. His music has been performed by the Bennetts Lane Big Band, Canada’s Frontier Justice Big Band and EMO (Enthusiastic Musicians Orchestra). 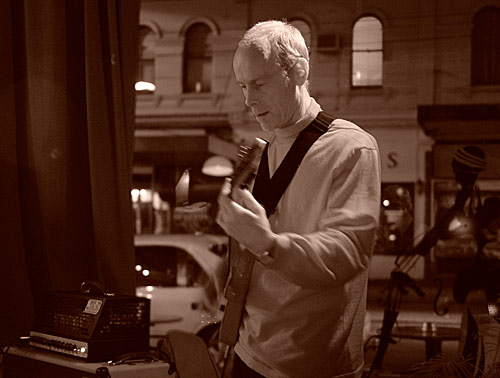 Tolley and Walters have a long, close musical connection. As Tolley puts it in his High 5 for Jazz and Beyond, “Hardly a month has passed in 18 years without some creative interaction [from Walters] which translates into a permanent place at my ‘table’ as my adopted son.”

Tolley gave up the bass violin in 2005 because of Parkinson’s Disease, but his recovery was “fed by intensive studio work with computer-generated electronic sounding and sporadic painting and drawing”. Late last year he organised RRaPP — a Reunion Retreat and Performance Project concerned with the “discovery through the process of composing and performing simultaneously, in real-time, interactively, without preconception but drawing upon the vast collective creativity, skill and experience of the protagonists.” This project facilitated Tolley’s return to bass violin.

Ren Walters is known to Fringe patrons for, among many other outings, his APRA Commission work performed at Iwaki Auditorium in 2009.

Steve Magnusson in a MJFF festival gig at the Melbourne Recital Centre.

MAGNET is a new project for guitarist/composer Stephen Magnusson as a creative collaboration with Ball, Pannuzzo and Argentinian drummer, Sergio Beresovsky, who is in Argentina. Beresovsky’s absence offers the trio version of the group a way to re-interpret their repertoire, as they do every time they perform, starting with simple melodies and building it “from their ears up”.

We can expect interaction and harmony at the deepest level of collective improvisation, with “the moments made as pure as if they had been composed over crystal”.