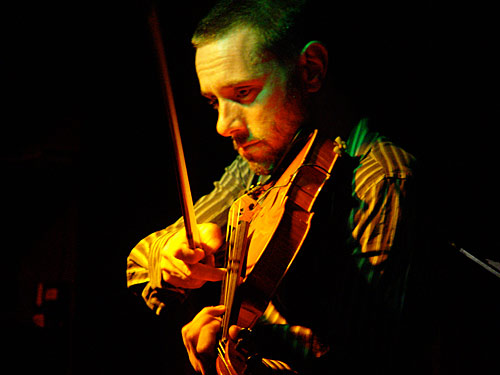 This was an unusual line-up, but not a surprise given the involvement of Simmons, Robinson and Ferella, who are always imaginative. It was formed in 2006 for a visit by San Francisco saxophonist and composer Phillip Greenlief, but he could not make it and neither did the charts for his suite, which was to draw on material from Ornette Coleman. So Simmons hurriedly put together a suite — untitled, but Adam suggests something like The Language in Beauty — inspired by Coleman, Greenlief and in part by the “what am I gonna do” panic that arose from wanting the gig to go ahead. Simmons asked Robinson to join and the band was born.

Collider has played infrequently since, at Melbourne Jazz Fringe Festival and the Melbourne Women’s International Jazz Festival. Most compositions are by Simmons and Robinson.

The evening opened with a Simmons piece entitled Words from Clouds, followed by three Robinson compositions — A Night on a Rollercoaster Turns a Woman’s Hair White, Midori and Malt as Water — followed by the Keeble and Hustas composition New Black Suite — New Black 1 & 2 and Homeland.

The second set at Bennetts included three pieces from the Language of Beauty suite — Raskolnikov’s Folly, What Were the Names of the Karamazov Brothers?, and  All You Need, and then Simmons’s Seven.

The pen I use to record track names and random responses to the music ran out early, so I hope the above is reasonably accurate. It certainly wasn’t accurate when this was first posted, but after multiple revisions and much help from Adam Simmons I’m hoping it is almost correct.

This was a most enjoyable and fascinating performance, but I feel as though words are a poor substitute for being there.

Collider works. It is unusual to have a violin and viola mixing it with more traditional instruments of improvised music, but the compositions and the musicians gave the whole performance an inspired coherence.

Ronny Ferella at the drum kit

There were some absolutely entrancing standout solos — Robinson digging deep into the gravel and realising mid-solo he was breaking Ferella’s earlier appeal for quieter playing, Ronny Ferella taking the space to take us on a sublime journey of intricacy and introspection, Anita Hustas opening the final piece of the night with great presence, and Simmons on fire in slow-burn fashion that etched tenor notes into the dark room.

Jason Bunn on viola and Andrea Keeble violin were responsive, excited and exciting, ever adept as they set up and ran with rapid escapades that were often answered by the horns.

This was really visceral music and its effect was felt physically. The combination of instruments provided a timbre-laden treat that would gladden the heart of a Tasmanian conservationist or an Orbost logger, or both. 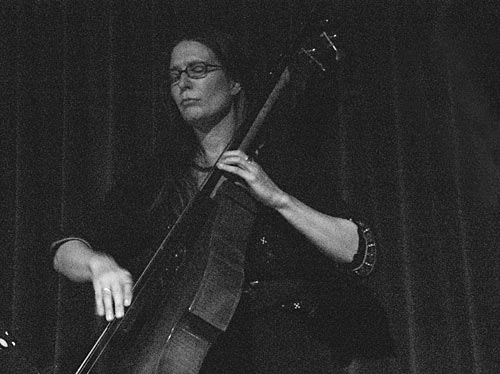 I loved the contributions of each instrument, though Hustas seemed to be a little lost at times from where I was sitting. I loved the percussive interludes and the way Ferella intervened with such sensitivity and minimalism. And I loved the drawn-out string notes as the sombre final piece, Seven, came to a close.

Now that Collider has made such an impact, let’s hope the band gets out more.