WIll Premier Ted Baillieu be all ears?

The Melbourne Jazz Co-operative’s campaign to have its State Government funding restored for 2013 moves to the next stage at 10.30am on Wednesday 20 February, when protesters take this cause to Parliament.

Those who love music and those who play for a living will be hoping that the Premier of Victoria, Ted Baillieu, will be prepared to face the music, following Arts Victoria’s decision to halt funding to this low-profile but hard-working co-operative, which has supported jazz and improvised music in Melbourne for 30 years.

There will be music on the steps of Parliament — possibly funereal — accompanied by some words from renowned performer, educator and musicologist, Dr Tony Gould AM, who recently accepted the position of Professor within the School of Music – Conservatorium at Monash University. Other speakers will be music identity Wilbur Wilde and the MJCs Martin Jackson.

Labor MP Martin Foley will present State Parliament with a printed version of a petition with hundreds of signatures — seeking the restoration of Arts Victoria funding .

The assembled protesters will call on the Premier, who is also Arts Minister to meet a delegation from the MJC to hear how the loss of funding loss is affecting local musicians.

All jazz and improvising musicians not teaching on the day are urged to roll up at 10am and to make their musical voices heard.

The Melbourne Jazz Co-operative’s campaign to have its State Government funding restored for 2013 is gathering momentum and moves to the next stage on Wednesday 20 February.

A printed version of a petition with hundreds of signatures — seeking the restoration of Arts Victoria funding — will be presented to State Parliament by Labor MP Martin Foley.

At the same time, a music ”action” will take place on the steps of Parliament. There will be speeches of support, outlining the MJC’s case and a demand will be made that Arts Minister and Premier Ted Baillieu meet a delegation from the MJC to hear the impact of the funding loss on local musicians, rather than leaving decisions to his narrow focussed arts minions.

All jazz and improvising musicians not teaching on the day are urged to roll up and make their musical voices heard.

More details as they come to hand…

BITTER, BUT OH SO SWEET 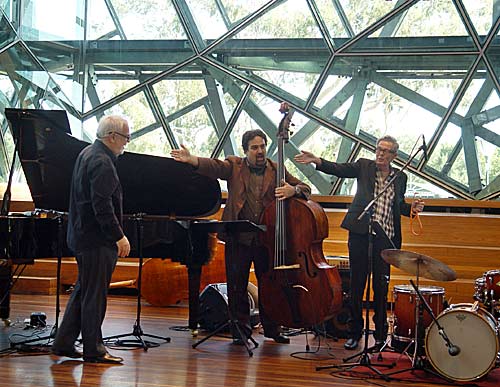 The music spoke most eloquently at The Edge on Sunday, but some perceptive words accompanied it. Paul Grabowsky, one of three musicians to perform at the Melbourne Jazz Co-operative’s first concert, held at RMIT’s Glasshouse Theatre on the Sunday afternoon of January 30, 1983, was obviously struggling to plumb the mystery of Arts Victoria‘s decision to cut the purse strings.

Before joining the other original MJC artist, Allan Browne, in a trio with Frank Di Sario — who in a way was sitting in for esteemed bassist, the late Gary Costello — Grabowsky said that, after listening to the earlier two sets, he could only wonder why any arts funding body would choose to cut support for music such as this.

He also reminded us that the development of music is as important as the playing of it, so the role of this co-operative is integral to the individual styles and works of Australian musicians.

Other words that added to the music commemorating this anniversary came from reedsman Julien Wilson, who has campaigned vigorously on behalf of the MJC. He said that, despite the significant loss being faced by professional musicians, ever since the halt in funding “every time I play it feels like a celebration”.

This concert to honour 30 years of achievement was bitter sweet. Arts Victoria’s timing was so bad. Yet Wilson spoke for the audience and the other musicians: this felt like a celebration.

Any one of the three sets could have served as musical sustenance enough. This was inspired programming by the MJC’s Martin Jackson — there was sufficient difference in approach from each trio, yet not such a radical change as to make any in the audience uncomfortable. 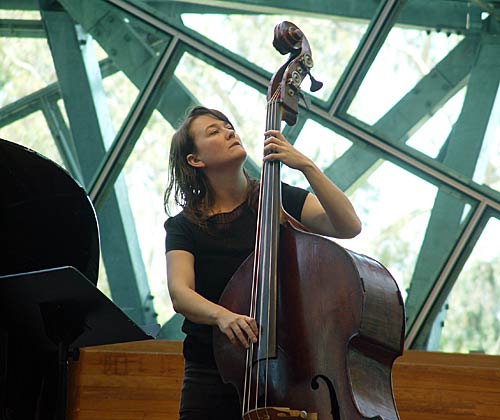 Pianist Andrea Keller joined bassist Tamara Murphy and Browne at the drum kit in a first set that was beguilingly beautiful, delivered by Keller with compelling strength and presence, and by Browne with his characteristic ability to let his body freely express feelings with stick, brush or hands. Murphy seems to play better each time she performs.

The trio played Keller’s compositions All Colours Grey (Parts 1 and 2) and That Day, Murphy’s Travellers and Lullaby and Browne’s Cyclosporin.

Before the set ended, Keller played two pieces from an unreleased solo recording, Family Portraits, in which she used a loop pedal. This technique, which had the pianist’s head disconcertingly disappearing as she bent to adjust settings, was especially effective in Without Voice, a tribute to the three grandparents she had never met.

Opening the second set with three solo pieces, expatriate pianist/composer Barney McAll displayed his flair, virtuosity and engaging humour, though he did not bring along his zombie clown puppet Feral Junior as he did recently to performances at Bennetts Lane Jazz Club. Now residing in New York, McAll is an example of how the MJC can nurture an artist of talent and originality. 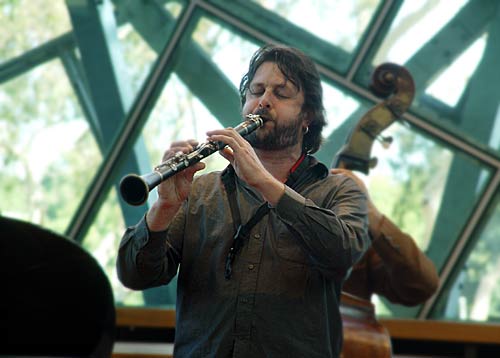 Saxophonist Wilson, forced to improvise without his usual trio, joined McAll and Sydney bassist Jonathan Zwartz in their debut outing together. It was fascinating to watch McAll and Zwarts observe, adjust and make this trio work.

Wilson, who admitted to possibly channelling the Mingus tune Goodbye Pork Pie Hat towards the end of his unnamed composition, played with iridescent beauty throughout the set.

Highlights were the Wilson and McAll solos in Hermeto Pascoal‘s Desencentro Certo (Certain Disencounter), Zwartz’s work in Wilson’s tribute piece entitled H and Wilson’s move to clarinet in Farewell (“a celebration for those who are no longer with us”), which was enlivened by Browne sitting in on drums. 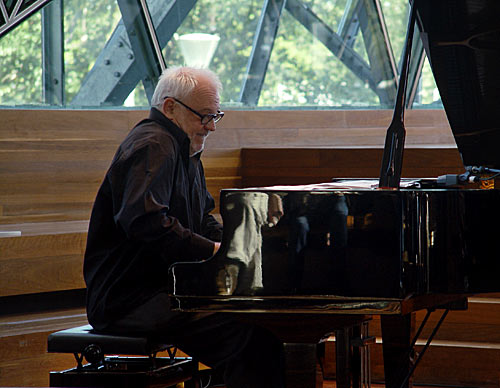 Another farewell, Grabowsky’s tribute to Gary Costello entitled Abschied, opened the final set with Di Sario and Browne. This dark, compelling piece was followed by Last King of Poland and the energetic Cryptostatic, with a segue into Psalm.

Di Sario and Browne gave Grabowsky space in this set, but were ready to intervene spiritedly.

It felt as if the auditorium was concentrating as one as the trio began the world premiere of Grabowsky’s Love Like A Curse. There was an encore, but I would have preferred to have this concert end with the consummate profundity of that composition.

Out beside the microphone from which 3PBS-FM program manager Owen McKern so capably hosted this MJC gig was an empty chair. The idea, previously tried without much success by Clint Eastwood at the US Republican National Convention, was that the vacant seat was for Victoria’s Premier, Ted Baillieu.

Eastwood has probably killed off any hope of the empty chair as a potent symbol, but if only the MJC could get Mr Baillieu to come to a concert such as this, I suspect the battle for funding would have some hope of success. Perhaps, to attract him to a gig, fans of jazz and improvised music ought to send him strong vibes of Love Like A Curse.