The collection of thoughts, inspirations and observations that inspired compositions in the third concert in Adam Simmons’ series collectively titled The Usefulness of Art would have been familiar to anyone who has spent time travelling.

These included the sense of adventure as we set out to explore the unknown, the opportunities to gain cultural and historic insights, the intensity of all-night experiences that extended until dawn, the rewards and risks of getting off the beaten track and the pleasure of tasting bread fresh from a bakery after a night of solving the world’s problems.

But Simmons’ inspirations also invited us to reflect on less positive but still powerful experiences encountered in the world. The program notes for his piece Threnody, a lament, refer to mourning for travellers who are on the road out of necessity rather than for pleasure. For me, this recalled one deeply affecting night spent talking with tea plantation workers in Sri Lanka as they tearfully farewelled families forcibly being repatriated to the south of India the next day.

Threnody was, for me, the most affecting piece in concert 3. It began with sonorous, plaintive strings under red lighting, Simmons standing behind the Arcko players, but not contributing. Then, as he moved forward, his tenor sax began a sour, rasping and agonising cry over the drone of strings that continued until the piece died away. It felt full of suffering and loss.

In this series of concerts Simmons has drawn deeply on Auguste Rodin’s view of the usefulness of the artist, including his declaration: “I call useful all that gives us happiness.”

Threnody felt like a reminder that at times it is important that we are not happy, having had our empathy awakened by the situation of others, able to feel compassion and to be motivated by anger to action.

Reflecting on this since hearing Travelling Tales, I’ve been reminded of how important the artists – painters, poets, musicians – were in motivating change in Iran before the fall of the Shah. The usefulness art was palpably evident then.

Of course the other eight pieces in concert 3 had quite a different flavour.

On the evening after this afternoon recital I recall telling a friend that this concert differed from the previous two in the TUoA series because Simmons was playing solos, with improvisations, while Arcko players acted as a unit playing from musical scores and under the baton of conductor Timothy Phillips. Viewed in that way Simmons was the star of the show, so to speak, and Arcko Symphonic Ensemble the skilled backing band.

But that view was wrong and does not do justice to the interaction between ensemble and soloist. Certainly Adam Simmons’ contributions stood out in this performance — I have never heard him play more evocatively — but it was the unity of the ensemble with soloist that delivered in spades. Everything Simmons created on bass clarinet, soprano and tenor saxophones was delivered into a soundscape created by Arcko players with subtlety and verve.

This unity of soloist with ensemble was evident from the opening piece, Beginnings, when Simmons’ light and air-filled musings on soprano sax – his notes wandering freely to give a taste of journeys ahead – were perfectly complemented by a slow undercurrent of strings. And in A Single Step Arcko players contributed drama and built intensity with sharply repetitive patterns as a contrast to soft, deep tenor sax notes and later muted explorations. The strings acted as a subtle drone in A Nod to the Old World, swelling and receding beneath the serenity of floating notes from bass clarinet.

In The City that Never Sleeps Arcko players awaken us to work collaboratively with Simmons in creating a wonderful complexity, soloist and strings taking different paths and varying intensity to build the busyness. And in Living by Numbers the symphonic strength and agility of Arcko was on show as Simmons on soprano sax perfectly captured the disturbing mood of adventure, risk-taking, daring and danger. In A Song for Sharing, ensemble and tenor sax did exactly that, working a melody into a round with strings seemingly egging on the soloist. Strings and soprano sax embraced fondly in the closing Warm Croissants.

The one solo piece in this concert, Milosc, was a sublime demonstration of how expressive a saxophone can be, notes at times soaring and flaring, then fragile.

Adam Simmons has said that each of these TUoA concerts will develop from what has gone before in the series. They have been so different that we await with great expectations the two yet to come. It has always seemed unfortunate and unnecessary that an artist feels the need to prove the usefulness of art. That’s a given. Travelling Tales has demonstrated how powerfully affecting art can be.

A few images from the night: 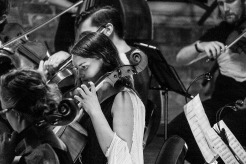