Some time this year, after what is sure to be one hell of a party, Melbourne will lose the venue that has been at the heart of improvised music in the city for many years. Who knows what will spring up in the way of alternatives to the iconic Bennetts Lane, but as jazz in this city moves on, Ausjazz has asked the people who worked there to reflect on their involvement with this most welcoming of live music venues.

1. Over what period have you been associated with BL and in what role(s)?
I started working at Bennetts in September 2009. I started on the door, worked on the bar and managed nights here and there.

2. How did you come to work there? Was there a job interview?
I had just moved to Melbourne and was offered a transfer from a retail store where I worked in my hometown of Armidale, NSW. I had been in Melbourne two weeks, loved the city and knew I wanted to study music. I went to watch Jamie Oehlers after a retail shift that made me feel very plain and met Megg and Jeremy that night. Megg came over, gave me a Coopers, chatted to me after the gig and I started three nights later. That night I felt my spark come back.

3. What was it like to work there?
No doubt it has overall been a lot of fun! I have learnt a lot about music, life, love, people and myself through the music, my beautiful friends I work with and the musos that have played there. It really opened my eyes to the amazing local music scene we have here in Australia and I am now friends with so many of the musicians that have played there. It really is a community. Overall Bennetts is a really inspirational place to me and I have so many memories and experiences that are built into my marrow now. Megg, Jeremy, Sally, Sarah, Hannah, Emma, Dette, Camilla, Rosie and Mia are all like family to me and I am so appreciative of all of the times we have had together at Bennetts.

4. Could you enjoy the music or were you often too busy?
It really depends on the night. Thursdays was my favourite regular night to work for two years as I had the chance to be busy enough in the bar, but also appreciate the music. Weekend nights are very different to weekday nights and were usually pretty busy.

5. Which was the most significant BL gig for you and who played?
Ohh, that’s a tough one. There have been so many memorable local and international gigs and I have worked a few jazz festivals now so it is very hard to say. One night there was some guy who decided to crash some Monash recitals and ROCK MY WORLD… I think his name was Prince. Another one worth mentioning is when Renaud Garcia-Fons played at the jazz festival a few years ago. He was a real inspiration to me playing double bass when I was 15 and I listened to his five albums on repeat for two years so when I saw him live, it was pretty special. Jeremy also proved himself to be a real sweetheart and gave me a signed poster because I was too shy to ask.

6. What was your best experience at BL in dealing with punters and/or musicians?
It’s been really great getting to know the community of musicians from around Australia whether it was sharing music, life stories, funny moments, a beer or two … or shots, being chased around with straws, locked in rooms, Facebook hacked and celebrating each other’s life and music ventures.

7. What was your worst experience at BL in dealing with punters and/or musicians?
They are all learning experiences. I think we have all cleaned up some unmentionable stuff gifted to us from our punters. Other than that, there’s really nothing that bad.

8. Was the most obstreperous person you had to deal with at BL a musician, a punter, a photographer or a media person?
All of the above are particular flavours of people. They also are humans, we are humans and sometimes flavours and humans don’t mix too well.

9. Were audiences on the weekend or during festivals very different? If so, how?
Yes they are quite different. As Sarah has mentioned, general weekend audiences are there for the ‘jazz club experience’ as opposed to jazz festival when most people have checked out the program, bought tickets and generally already know the artist.

10. How long was your longest continuous work shift at BL, and what was the occasion?
Jazz festival are always the big shifts. I have done a few of the 1pm starts and leaving at 5am. Jazz Festival week definitely messes with your body clock, I always feel jet lagged a week after, but very satisfied.

11. Were your best times at BL during the gigs or after the punters left for the night?
I think both of these are pretty great and different. I love music, so it’s always great to hear the gig and get a chance to appreciate it and then after we can chat about the gig. The knock off drink is always the treasured moment where we can share stories, create cocktails and talk about life. I have many really amazing conversations with people who are now my best friends on the other side of the bar at the end of the night.

12. What instrument do you play, what music studies have you completed and in what bands have you played?
I play double bass and completed my music studies at VCA through the improvisation stream. I have had the pleasure of playing with really great musicians in Sidney Creswick, Andrew Kimber Quartet, The Furbelows and SMES. Notably, I am working with my trio this year to develop more repertoire so that’s nice and exciting.

13. If you have performed at BL, what was it like to be on stage rather than on the door or behind the bar?
The first time I was really nervous, it’s like having my family watch me play. After that, the stage also felt like home so it’s nice playing my own music in a space that has a place in my heart. It was also good because I knew that particular staff members could talk to me really honestly about what they thought of tunes and the gig, it was like a workshop.

14. What work or interests do you have outside BL, whether musical or not?
After VCA, I decided to do my Masters in music education. From there I landed a pretty amazing job at Albert Park College as a music director. I really love teaching as much as playing and it’s great to be able to teach 7-12 in the classroom and teach my gems on double bass. The teaching gig has been a big part of my life the past 2 years so I haven’t been able to work at Bennetts as regularly, but I have been able to sneak shifts in before the closure. In my down time I like to draw, write poetry, workout and watch Aussie drama. This my moment to share to the public that I have an unexplainable obsession over Aussie drama tv shows… especially Offspring #mattlenevezmarryme. There I said it.

15. What plans do you have after the closure of BL?

That will be a sad moment and I will feel a gap for a while, but I’m sure whatever happens next will be done with the best interest of the musicians. We have something really special here in the Melbourne and Australian scene so I hope it nurtures and supports that. Me, I’ll keep teaching and hope to keep passing on lessons of positively supporting music communities that Bennetts has taught me. 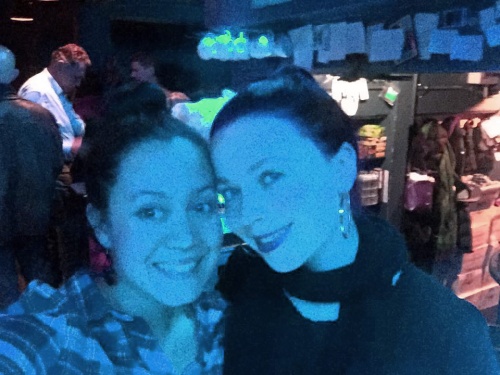 16. What will you miss most about working there?
The people. There is a really family between us and it will be sad to not have all those moments in the bar together listening, dancing, tricking, talking, laughing and crying together.

17. Will there ever be another BL in Melbourne?
To me, Bennetts is associated with those rooms, those walls, that stage, those bar floors and the little bumps and scuffs around the place. I think there will be something that keeps supporting the jazz community, but it won’t be the same because it’s not in that place and the people. Saying that, I think whatever is next will be done with the best intentions and I will be one of the first people at the bar to support it.

18. What do you think made this jazz club so successful?

The care and the people. Michael, Megg, Jeremy and Sally have worked hard to build a place that supports and encourages the musicians and the staff. I have always felt so incredibly supported, appreciated and loved by them so it’s important that I reflected that in my work and my relationships with them. The music I have experienced within those walls of care has made the music that touch more special.