Some time this year, after what is sure to be one hell of a party, Melbourne will lose the venue that has been at the heart of improvised music in the city for many years. Who knows what will spring up in the way of alternatives to the iconic Bennetts Lane, but as jazz in this city moves on, Ausjazz has asked the people who worked there to reflect on their involvement with this most welcoming of live music venues. 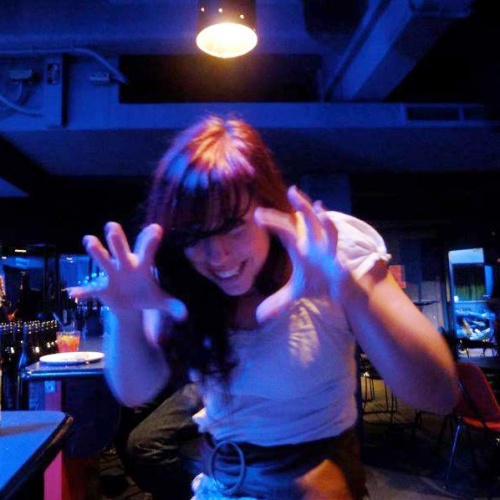 1. Over what period have you been associated with BL and in what role(s)?
I began at Bennetts in 2009, and have been there off-and-on since then (mainly whenever I’m in the country)! You can find me primarily in the bar, but sometimes on the door too.

2. How did you come to work there? Was there a job interview?
When I was 4 my Papa enlisted me as the drummer in his jazz band. We used to do the old people’s home circuit, which Pa loved because he was usually younger than the majority of his audience, and because some of them couldn’t hear us very well (which is lucky, because I didn’t really know how to play drums). Later, I moved to a college in USA with an amazing jazz program. People would be jamming in any spare space, and from dorm to cafeteria to lecture theatre, I was constantly surrounded by music. Returning to Australia, I missed being in a space where jazz presided, so sought out Bennetts Lane and handed Megg my CV. She asked me to come in for a trial, and by the end of the shift she offered me the job — I accepted without hesitation. She told me I’d forgotten to ask an important question — what the pay was. I told her it didn’t matter — I was enamoured with the place already.

3. What was it like to work there?
Going to Bennetts never feels like going to work. I know that no matter how stressful or exhausting a day was, by the end of the night I would always walk out of Bennetts feeling better than when I went in. Bennetts has a kind of magic about it.

4. Could you enjoy the music or were you often too busy?
There were some nights that were a flurry, you barely got a chance to look up and see who was where on stage. And there were others, luckily the majority, where there was plenty of time to enjoy the music. The people who come to Bennetts, and who love music, have an incredible respect for the musicians, so you’d generally only interact with them during set breaks. Which meant everyone had a chance to listen to the gig.

5. Which was the most significant BL gig for you and who played?
Luke Howard. The first time I heard him play, I was so entranced I can’t remember if I actually served anyone during the gig. Afterwards I went and thanked him for playing the kind of music I didn’t even realise I loved. He started my love affair with neo-classical music.

6. What was your best experience at BL in dealing with punters and/or musicians?
An incredible performance by the Neil Cowley Trio. The patrons were really lovely, the music was sublime. Followed by after-work drinks, wonderful conversations ranging from intellectual to crass, and a crash course in mixology for the band resulting in one of the dodgiest cocktails I think I’ve ever seen.

7. What was your worst experience at BL in dealing with punters and/or musicians?
Someone coming to the door and demanded to be let in for free, asking indignantly “Don’t you know who I am?” I replied I barely knew who I was, in an existential sense, so I couldn’t possibly tell him who he was. I then informed him the cover charge would be $20. He didn’t seem to find the situation as funny as I did.

8. Was the most obstreperous person you had to deal with at BL a musician, a punter, a photographer or a media person?
The people that came through the doors at Bennetts are generally genuinely lovely – it’s like the doorframe was a filter for wonderful people. I did have someone who was unnecessarily rude once. I took the “customer is always right” route and remained courteous. Megg came up to me and afterwards and told me that I didn’t have to serve someone if they were that rude, and if I had an issue telling them that then she would. “They’re only here for a night, you’re here every night. You’re my priority.” I countered with “But they might not come back.” Her response:“Exactly.” That’s Bennetts. It’s a family that looks out for one another and creates a really lovely space for people who want to appreciate some really phenomenal music. It has a way of keeping the wonderful in.

9. Were audiences on the weekend or during festivals very different? If so, how?
The weekend/festival gigs tend to contain more “shhhh” in them, generally provided by the staff. They can attract a lot of first-timers to the club. If you haven’t been to Bennetts before, it could be hard to know how to ‘be’ in the space. If you enter a concert hall, or a theatre, the space guides us and tells us that we should be reverentially silent during the performance. The space of Bennetts is a bar, usually you go to bars and catch up with friends, talk, banter. Bennetts is a kind of amalgam of the two, so it can take people a little getting used to.

11. Were your best times at BL during the gigs or after the punters left for the night?
Both. The people who come to Bennetts are really lovely – they’re wonderful to talk to and you all get to enjoy the music together. Afterwards, when the chairs are up and the lights are on, that’s family time – staff-family, musician-family, friend-family.

12. What instrument(s) do you play?
I’m certainly not a musician, though I can sing a mean Christmas carol in the shower. I play little bits of guitar, taiko and piano, all with questionable skills and endless enthusiasm.

13. If you have performed at BL, what was it like to be on stage rather than on the door or behind the bar?
Sometimes I would vacuum the stage at the end of the night — it’s quite warm up there under the lights. I think I prefer the bar.

14. What work or interests do you have outside BL, whether musical or not?
I’m a research scientist and travel a lot. My current aspirations are to become a yoga teacher, learn to swing dance and to be able to write really good computer code — I just need the time to fulfill them (around learning German and completing a PhD)!

15. What plans do you have after the closure of BL?
I have work commitments in Italy, Germany and at the synchrotron in Melbourne over the next 3 months, so will be moving around a little before starting a PhD in Europe.

16. What will you miss most about working there?
I will miss coming home to Bennetts. Every time I move back to Australia, Bennetts has been there. I may have a different house, project, day job, but Bennetts has always been a constant. Walking along the lane and through the doors — the red vinyl chairs, the blue bar lights, the carpet you don’t want to look at in daylight — makes me feel like I’ve arrived back in Melbourne. That space feels like home. And the people there are family. I know I’ll get to see everyone again soon, but having everybody concentrated in a bar awash with jazz for so long was a very big treat!

17. Will there ever be another BL in Melbourne?
Bennetts Lane will continue to exist in Melbourne. Bennetts is and has always been the people; the musicians, the audience, the staff. It will just be displaced, fractured and a bit harder to find now — Bennetts was a wonderful place that brought all those pieces together.

18. What do you think made this jazz club so successful?
The fact Megg stumbled in one night many moons ago and found a place she wanted to commit her skills, talent and personality to. And now it’s hard not to name every one of the staff and extol their virtues, the musicians and praise their talents.. the people. It’s the people.