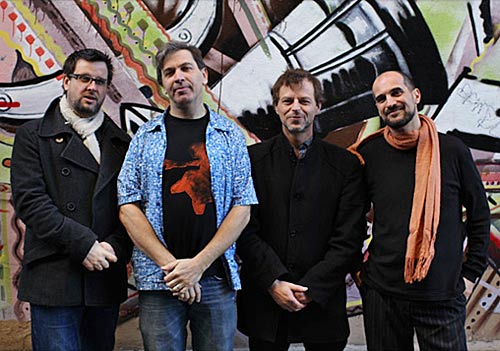 The attraction of MAGNET lies in the collaboration of kindred spirits. As Roger Mitchell discovers, the quartet’s vocalist
can play a right-handed drum kit the wrong way around,
and its guitarist was dumped by text message during a
recording session.

More than one musician has likened improvisation to conversation, pointing out the ease with which we talk among friends, listening and speaking without planning much in advance.

In conversation, Stephen Magnusson and Sergio Beresovsky are at ease with each other. Ideas and recollections flow; laughter and passion for invention follow.

The relaxed nature of their interaction may help explain how guitarist Magnusson’s quartet MAGNET was able to record an album at Sing Sing Studios in June last year before having played a gig.

“We rehearsed a little bit, then we went into a studio and recorded,” Magnusson recalls. 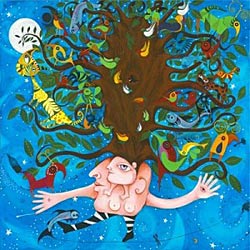 “In the studio we found each other, said ‘Hi, how are you?’, found the tunes and came up with some road maps of how to develop the compositions. So that was that and then we went and did a gig afterwards.”

Not that it was all plain sailing initially.

“For the first couple of hours it wasn’t much fun,” Magnusson says. “We couldn’t get the sound and we were all a bit nervous. At the end of first day we were starting to get it.

“Then, after a day and a half of recording, I took the tracks to Niko’s [Niko Schauble’s studio Pughouse] and I sculpted it a little bit — added a few instruments, pulled a few things out, shaped it. I really wanted to turn it into a bit of a sonic thing rather than a jazz record.“

What emerged on the eponymous album is definitely not straight-ahead jazz. It’s not bebop.

But Magnusson says the forms of many MAGNET tunes are the same as in standards because “you make a melodic statement and then you improvise — sometimes on changes, sometimes on a groove, sometimes just with each other on material”.

“The content might be different. We don’t play the stylistic lines of some of the great jazz masters, the particular patterns and melodic statements, and we don’t play the rhythmic swing pattern. We don’t follow that, and there’s no walking bass line.” 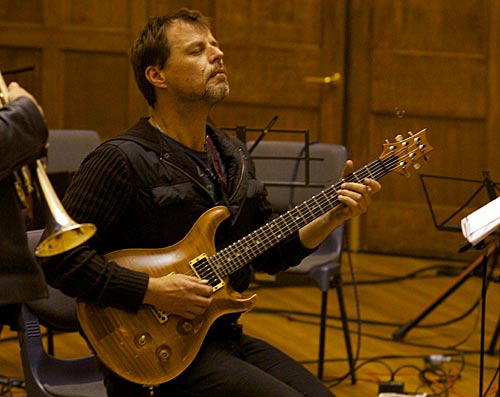 Magnusson with MAGNET in trio format at the Melbourne Jazz Fringe Festival.

To Magnusson bebop isn’t a style, but a context.

“These people lived in that period and that’s how they spoke. The players didn’t call it that. It was Minton’s [Playhouse in New York] and Charlie Christian and Thelonious Monk just having a ball, off their faces smokin’ joints and playing music all night. They were just working on their craft and trying to get good at material and finding new ways of creating melodies.”

Beresovsky agrees: “MAGNET’s not a bebop record. We can’t play bebop. The jazz word is a bit of a negative thing for our days because it locks things up into what it should be like and then what do you play? Music. We play sounds, and some rhythms eventually.”

Magnusson’s favourite definition of jazz is as a verb, not a noun.
“It’s a way you see the world. And jazz has always been about being yourself and doing what you do. And it’s over 100 years of change, and this is what we do. We are not reinventing the pie or anything. We are just doing what we do.”

Beresovsky applies this to tango and new music in Argentina: “The people trying to play new tango, it’s pretty lame because you can’t do that again. Only a few people can do it and most of the time they are old people, the originals.

“I consider we are playing jazz because we have the spirit of it, but we don’t sound like Charlie Parker.” 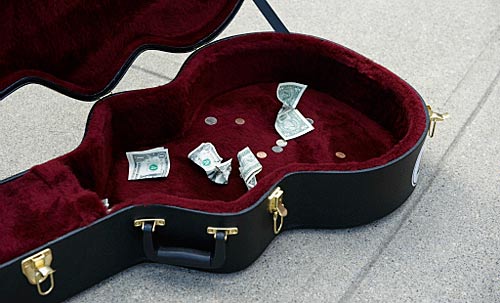 Magnusson and Beresovsky say they weren’t “busking busking” but they enjoyed the hippie lifestyle in Zurich. (Picture: Rough Guides)

MAGNET did not have its beginnings at Minton’s, but the seeds were sown with Beresovsky and Magnusson having a ball while busking beside the lake in Zurich in 1994.

“I was busking before Sergio got to Zurich and we were making 150, 200 bucks a day,” Magnusson recalls.

“We’d play, move, play somewhere else, move — 10 hours. It would be a big day. Then you’d get gigs from that. It was quite a lucrative business for a month and a half. Then we were all burnt out, but we made thousands of dollars. It was cool.”

In June, at a jam session, he met Beresovsky, who had left Argentina at age 25 to live in Brazil and then wandered “where the wind blew me” in Europe. They spent two years “just hanging out on the street” in Zurich.

“It was hard to get gigs,” Magnusson says. “You have to have the CD and the profile and we didn’t, so we were just hanging out, riding mountain bikes and playing music. It was a pretty easy life, swimming in the lake and watching beautiful women and eating good food — a bohemian, hippie lifestyle.”

A lot of international musicians came to play. Magnusson says he heard all his heroes.

“Pick a jazz musician and they’ve played in Zurich. I remember one night there were four really heavy gigs on and you get really blasé. Al Foster was in one joint, Tribal Tech were in another gig … at the end of it we’d say, oh let’s just go home.”

“We’d always try to get in for free, to try to sneak in, say to the Kongresshaus, which is like the Sydney Opera House, to see [Norwegian saxophonist] Jan Garbarek. I’d pay 100 bucks to see Pat Metheny because I wanted a good spot, but other things we’d chisel our way in. [American saxophonist] Michael Brecker would be playing at the school where I taught, so we’d get to see some amazing stuff.”

MAGNET minus one: Magnusson and Pannuzzo in trio format.

But, as the seeds of MAGNET took root through the association of Magnusson and Beresovsky, more amazing music awaited in Australia in the person of Carl Pannuzzo, a multi-instrumentalist who’d play drums and sing with his band, Checkerboard Lounge.

“Carl was like the Grateful Dead of blues in Melbourne,” recalls Magnusson, who had with him a solo record, called Blisters, which Pannuzzo had made years earlier.

“It’s one of my favourite records of all time. It touches me and it has beautiful songs. It reminds me of all our song-writing heroes, from Joni Mitchell to James Taylor — he has that poetry and that beauty, and it’s crusty and everything, but you can still put it on now and go OMG, wow. It’s a winner.”

In Melbourne in 1996, Magnusson and Beresovsky went into a club where Pannuzzo was playing a right-handed drum kit the wrong way around.

“I was really blown away,” Magnusson says. “I was like, what is this? The guy was like in a trance, losing it completely. It was so wild I couldn’t believe it. Amazing music. It looked very weird.”

Three years later, Magnusson and Beresovsky recorded one track on Pannuzzo’s Passing Eye of the Sun.

Magnusson can laugh now: “That was a bit of a disaster for me, because I got dumped by my girlfriend during the recording session. At the count-in of the tune, a text message came in. She dumped me, she was in Boston. I was just devastated and then, ‘two, three, four…’.

Magnusson: “It was very funny. You fell off the kit almost when I showed you.“

Beresovsky: “It can’t be funnier. This was the best.”

Pannuzzo then sang on a SNAG album recorded at the ABC, but never released. It was the beginning of the relationship.

Magnusson likens Pannuzzo’s vocals to those of Faith No More singer Mike Patton, who in one concert at the Rote Fabrik (Red Factory) in Zurich “went from screaming to singing like a soul singer to making ‘mi mi mi’ sounds, so it was funny, you’d laugh your head off, but you’d also go, wow. In a way that’s what I feel Carl offers — humour and also the beauty and the wackiness.”

Agreeing that Pannuzzo does really stretch his voice, Beresovsky says the vocalist “uses all of it, that’s the thing — the whole instrument, he doesn’t just do one thing. He can be screaming here and next thing he can be talking about something into the microphone.” 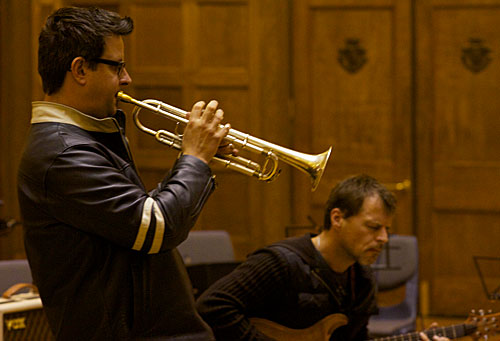 MAGNET minus one: Eugene Ball and Steve Magnusson in trio format.

Eugene Ball had not played with Pannuzzo before MAGNET was formed, but he has performed a lot with Magnusson and was in a trio with the guitarist and Beresovsky.

Like their conversations, this musical association seems a natural development between close friends.

“And it’s still finding its way,” Magnusson says. “It’s still in flux. It feels like it’s still stage one and we’re still on our way and we’ll see what happens. We haven’t played a lot and we’re still playing. A couple of plays before Wang and off we go.

Reversing the record-then-play order of the first album, MAGNET will record again at the end of November.

“It will be fun to do something after we’ve had a chance to play and we’ve got some new material. Sergio’s a really fine guitarist, so I want him to play guitar on the album as well, if he wants to, that is.

“Also Carl Pannuzzo is a fantastic drummer, so we may have Sergio playing guitar and Carl playing drums, while I go and make a cup of tea. I may not play at all, just make cups of tea and peel oranges.”

MAGNET is playing the following gigs:

One response to “WE DON’T SOUND LIKE CHARLIE PARKER”