BOAT MUSIC — A JOURNEY TO WHERE?

It was intriguing. It was mysterious. It was hard to find.

The concept was intriguing — four musicians performing on a sculpture entitled “boat music”, a sequel of sorts to Adam Simmons‘ recent exhibition at Catherine Asquith Gallery and inspired by his concerns about the plight of refugees and the absence of compassion towards them by many in our community. The performance was a mystery — would they play instruments or be in a boat? The venue was hard to find — described as “part design installation, part architecture and part music”, ANAM (Australian National Academy of Music) Quartetthaus is a special listening place developed for the 2011 Melbourne Festival. It is also moveable, so its appearance on a vacant block of land in Melbourne’s arts precinct was sudden and unexpected.

Tents and a caravan provide the setting for boat music

The setting was surreal. A few tents, a caravan and a few cars populated the surprisingly vacant prime real estate beside the Australian Ballet School, on the wall of which was projected some sepia images that, it turned out, had no connection to the performances in Quartetthaus. Around makeshift tables in the gathering dusk were scattered a few metal bins with smouldering and smoking fires to warm waiting patrons.

Enclosed by a wire fence was the invitingly lit timber structure, suggestive of a packing case, lit from within and sitting lightly like a space craft on the land, illuminating the green of weeds beneath. It felt as if, at any moment, with appropriate noise from within, it may lift off and soar into the heavens.

It was chilly waiting to get in, but cosy and comforting within the space, which seemed wholly constructed of warmly hued, light timber. It was like a wooden version of the Spiegeltent. Two rows of seats surrounded the circular stage, on which there were four stools. The ceiling resembled a huge wooden ceiling fan.

In centre stage stood a tower of timber boxes that could conceivably have held paper — in trays or out trays, perhaps?

The performance began like a meditation, the four stools occupied by the four musicians, sans instruments, who sat quietly without moving. Before them rose the irregular stack of boxes, connected by loops of flat, wide tape. Nothing was happening. Nothing seemed about to happen. 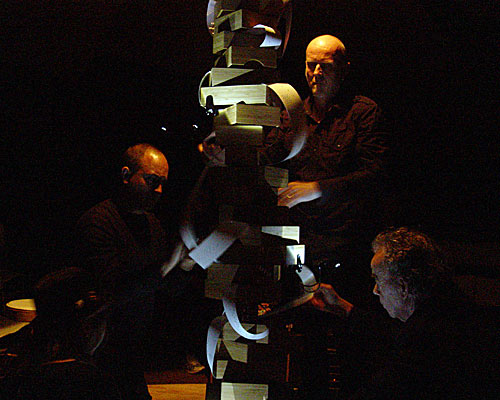 In time there was movement. At some point the four — I came to see them variously as custodians, facilitators, public servants or operatives of the state — arose from their chairs and began to tend the tower. About the same time it became apparent that, ever so slightly, the scene was changing in another way. The stage was silently, but inexorably on the move, beginning a slow rotation that would take the duration of the performance — about 50 minutes — to complete. 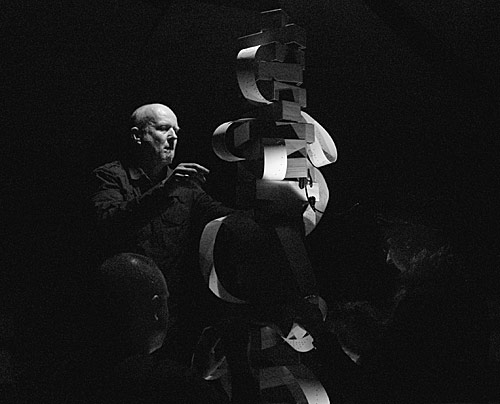 In near darkness, lit sporadically as they moved, the four tended the tower, moving without haste to push and pull, slide and drag the tape to keep a process going. But to what end? Would there be an end?

The “paper” tape was being propelled by Adam Simmons winding the tiny handle of a music box, but for a while there was no sound. The loops of tape needed constant attention. The focus of the four operatives was intense. No excess of tape was allowed, because that would lead to deprivation elsewhere. The tape could not propel itself. It had to be coaxed, cajoled, given impetus. It had to be shuffled, nudged, nurtured. The process was the focus. The end, if there was one, was not apparent, not important.

All sorts of things came to mind while this process continued — the enormity of the refugee problem worldwide; the seemingly endless processes that form a big part of that problem; the trauma, heartache and loss experienced at a personal level by the individuals and families involved, rather than much removed as a problem of numbers (of boat people, of votes); the waiting; the hopelessness; the paper shuffling; the time spent getting nowhere; the devotion to process that becomes the end in itself.

Moving down: David Brown at work in boat music 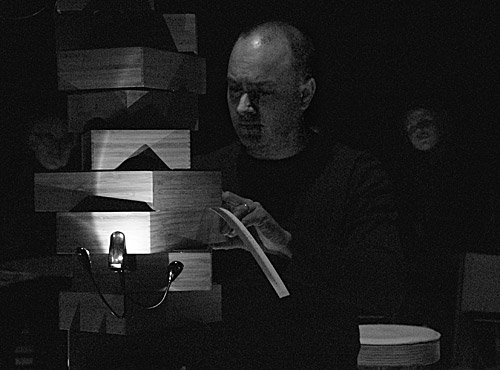 Eventually, and unexpectedly despite its logical inevitability, an end to the tape emerges. At the top of the tower, David Brown has less to do. The process moves down the structure.

The pushing and sliding and shuffling and pulling becomes the focus of fewer operatives. In the end, there is only Adam Simmons turning the handle slowly as the tape completes its journey. The music and the process stop. The stage stops turning.

We have turned full circle. We are back where we started.

Ausjazz blog was a guest of Adam Simmons at this ANAM performance.

3 responses to “BOAT MUSIC — A JOURNEY TO WHERE?”