This was a chance to catch two recent recipients of awards in two line-ups. Drummer Tim Firth won the 2012 National Jazz Awards competition in Wangaratta and Alex Boneham was recently chosen as Young Australian Jazz Artist of the Year in the Jazz Bell Awards. Firth — who not so long ago had two months away from his drum kit after breaking his arm — and Boneham — who is becoming as ubiquitous as fellow bassist Sam Anning before he left for New York — certainly justified the judges’ decisions at Chapel Off Chapel.

Of course guitarist James Muller has a swag of awards, having shared the 2000 National Jazz Awards and the following year won two Mo awards for best jazz instrumentalist and best jazz group. His albums have won an ARIA award and an ARIA nomination, and he won an APRA award for most performed jazz work 2003, and also won the 2004 Freedman Fellowship for jazz.

On the night, I found Firth’s trio delivered a stronger and more interesting set. 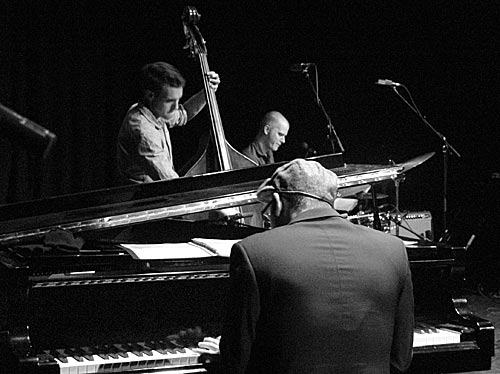 The trio played original material that was texturally and rhythmically strong and always interesting. These pieces were not marked by alternating solos, but evolved and changed seamlessly. Two of pianist Steve Barry‘s compositions, Changes and Ambulation, opened proceedings, followed by a Firth piece entitled Sparse. The audience was hooked. 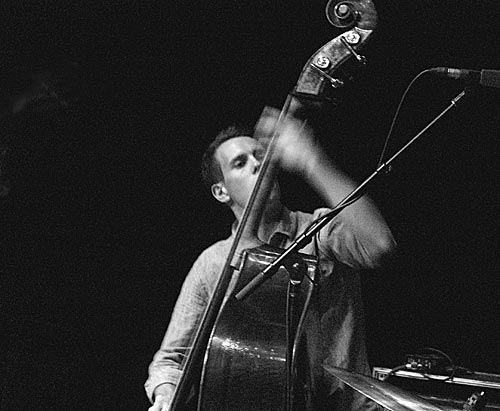 The next piece, Descending, began with a solemn, chordal feel that was quite beautiful, with a long, compelling solo from Barry. As it developed, there were surges and retreats as intensity and momentum developed. The tension dropped away towards the end, leaving quieter piano with minimal contributions from drums and bass.

There was more intensity and focus, along with some tempo variations, in the trio’s rendition of Wayne Shorter’s Pinocchio. Barry’s piece BW closed this engrossing set, with Barry’s expansive piano reminding me of John McAll.

In the second set the James Muller Quartet opened with the guitarist’s Rubbish, though it clearly wasn’t, followed the Sean Wayland piece Honeycombs, by which time the band had warmed up a bit and Firth indulged in a little crash and bash.

The highlight of this set for me was Muller’s interpretation of Gershwin’s ballad Embraceable You, which showed the depth and finesse the guitarist has at his fingertips as well the subtle nuances he can bring to make a standard his own. Muller’s Chick Corea featured some great solos on guitar, sax and bass.

The next piece, JB, was dedicated to drummer Simon Barker’s dad John. This was followed by Mode 6 and Anthrochromatology.

I had to leave the set early, which possibly means I can’t do it justice. But my only reservation, apart from a desire to sometimes hear Muller really let rip with a blazing solo (an odd thing given that I am not a huge fan of crash and bash drumming), is that the quartet pretty much kept to that solo by solo approach that is fair enough as a way to display virtuosity but does not necessarily make for cohesion and development in compositions. That is a minor reservation that could be applied to many bands.

This was a great night of solid jazz that really delivered. As mentioned, I thought the Tim Firth Trio had the most interesting material on the night. I really want to hear more of Steve Barry on piano.