LAST night one of my favourite festivals of improvised music was launched at Malvern Town Hall with a grab bag of acts including Women of Soul, Paul Williamson’s Hammond Jazz Party and the Compton Organ Exhibition.

Sadly, the familiar red, black and white program for the 10-year anniversary of this all-Australian jazz festival is missing the familiar face of its artistic director for many years, Adrian Jackson.

Yet the guiding hand of Jackson, which has been especially valued for bringing together unusual and spectacularly successful combinations of artists at Stonnington’s festival and over the years at Wangaratta Festival of Jazz and Blues, is still evident in at least one concert this year.

Jackson had booked Andrea Keller and Miroslav Bukovsky to  present The Komeda Project at Stonnington well before he handed over the reins to program director Darcy Condon — booker for Sydney venues The Hopetoun Hotel and The Annandale Hotel during their glory days in the early 1990s, part of the team that established The Metro on George Street and more recently part of the team organising Byron Bay’s Splendour In the Grass festival.

With an ensemble of eight brilliant Australian contemporary musicians, Keller and Bukovsky in December last year at Bennetts Lane Jazz Lab treated us to a spectacularly creative response to, and reinterpretation of, some music of Polish film music composer and jazz pianist Krzysztof Komeda. The two sets were quite different, reflecting Keller and Bukovsky’s different takes on Komeda’s music.

If you have the chance to get to anything on the program at this year’s Stonnington festival, do not miss this chance — tonight, 15 May at 7.50pm at Chapel Off Chapel — to be moved and warmed by the creativity of Canberra trumpet player/composer/improviser Bukovsky and Melbourne’s pianist/composer/improvisor Andrea Keller along with the Stonnington Youth Jazz Initiative.

The program does not list musicians in the line-up, but I assume James Greening will be in town to add his charm, wit and trombone work to die for. And it is to be hoped that Erkki Veltheim will be in the octet.

To whet the appetite, here are a few images from the Bennetts Lane performance of The Komeda Project. I am sorry that work prevents me from being there tonight for what was a musical highlight for me in its earlier incarnation.

The Komeda Project at Bennetts Lane 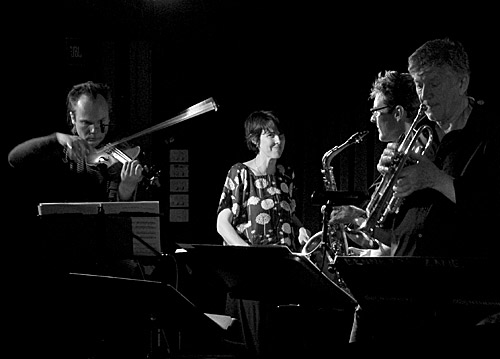 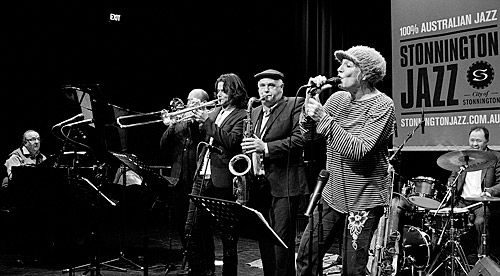 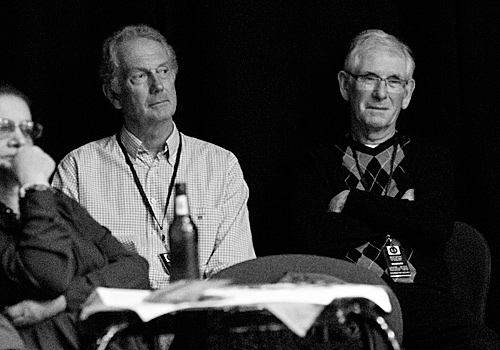 Stonnington stalwarts: Doug and Les finally take a seat in the crowd.

If you recognise these two faces, it’s because Doug and Les have long been making a big contribution to Stonnington Jazz over the years, whether taking tickets on the door at Malvern Town Hall and Chapel Off Chapel or driving artists to and from these venues.

These capable lads know and love the music. They do their work voluntarily.

In the picture above, they are seen at the final festival gig for 2014 at Chapel Off Chapel, taking the weight off after many nights of duty.

It’s always great to see these guys at Stonnington Jazz. They help make patrons feel welcome at this friendly and relaxed festival.