IT’S ALL HAPPENING AT STONNINGTON JAZZ

Things are looking a bit bleak lately, with news of job cuts and continuing financial woes in Europe to add to any gloom induced by the grubby world of politics, with its inability to inspire. So what do we need? Well, it’s pretty clear — we need a good dose of music to lift our spirits, send our thoughts soaring with entrancing vocals, dancing to some hot Hammond B3, quietly revelling in Mozart or chuckling at the perceptive, wry humour of a drummer poet.

So Stonnington Jazz, now in its seventh year, is the go. Program details are on the website, but this is a cook’s tour of some anticipated highlights at what must be one of the friendliest of jazz festivals. Believe me, once this festival is in your blood, you’ll never overcome the addiction.

It’s a big year for vocalists, beginning with singer and pianist Sarah McKenzie, who not so long ago was landing by helicopter atop a waterfall in the Australian outback, taking a dip in the pristine waters (yes, they’re always pristine) before returning to take the microphone for another performance aboard a small, but luxurious cruise ship. For the second year running Sarah will launch this festival — this time playing her own arrangements for the 17-piece Generations in Jazz big band based in Mt Gambier and composed of students who study under the tutelage of saxophonist Graeme Lyall. With McKenzie at Stonnington will be Hugh Stuckey on guitar, Young Australian Jazz Artist of the Year Alex Boneham on bass and Craig Simon on drums.

McKenzie, 24, was hoping to release her second album in time for the festival, but a recent Melbourne Weekly article mentioned it would be out in August, so maybe there has been a delay. If so that’s a pity because albums usually sell like those proverbial hot cakes at Stonnington Jazz performances.

Sri Lankan-born vocalist Nilusha Dassenaike will join percussionist-composer Alex Pertout, originally from Chile, for a Chapel Off Chapel concert. Their contemporary world sound draws on their roots and many other global influences. Their album Moments in Time is a recent release.

One of the great successes of last year’s Wangaratta Festival of Jazz was a performance by frontman and primary songwriter for Aussie rock band Thirsty Merc, Rai Thistlethwayte. He wowed the audience at St Patrick’s Hall. At Malvern Town Hall Thistlethwayte will feature with another young vocalist, Josh Kyle, who went to Britain in 2009 and had great success after a chance meeting with bassist and producer Geoff Gascoyne. Kyle released his debut album Possibilities at the London International jazz Festival in 2011.

For fans of Nina Simone, singer/songwriter Ruth Rogers-Wright will pay tribute in Fabulous Diva: The Music of Dr Nina Simone at Chapel Off Chapel. Rogers-Wright is from the London suburb of Brixton, but has lived in Melbourne for 15 years.

But Stonnington is not all about vocalists. Drummer and passionate lover of poetry Allan Browne, who is also festival patron, will dedicate an afternoon gig at Chapel Off Chapel to classic New Orleans jazz and poetry, assisted by Geoff Bull on trumpet, Dave Hetherington on clarinet, Margie Lou Dyer on piano and vocals, and Mark Elton on bass. The concert will provide a preview of Browne’s poetry collection Conjuror, published by extempore.

Another highlight will be a Chapel Off Chapel evening featuring the McAll brothers Barney, now living in New York, and John. The elder brother — pianist, composer, arranger and producer John — released the album Black Money in 2009 to great acclaim. His set will include some material from his forthcoming album Alter Ego. The younger McAll, Barney, is known for venturing into new territory. For his set, he will explore his passion for Cuban rhythms in Chaos Lento: A Guajira Project, with Ben Hauptmann on guitar, Phillip Rex on bass, Craig Simon on drums and Javier Fredes on percussion.

McAll the younger in reflective mood before the performance of Graft at Wangaratta.

And, for something completely different, Barney McAll will bring his suite Graft, which he presented at Wangaratta last year, to Malvern Town Hall. 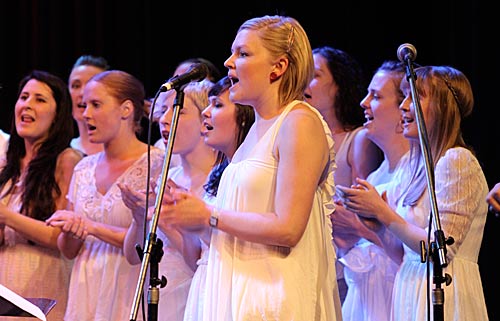 Gian Slater and the Invenio singers at Wangaratta in 2011.

The work explores “the ever increasing ambiguity between virtual and real” with the help of 16-voice choir Invenio, led by Gian Slater, as well as vocalist Sia Furler and drummer Dan Weiss. I found this suite a challenge at Wangaratta but possibly that is what McAll the younger had in mind.

Other gigs in the big space at Malvern Town Hall include Bob Sedergreen’s Milestones in Australian Jazz History performed by the octet Bob’s Southern Jazz Coalition, and Joe Chindamo Trio (Phillip Rex on bass, Danny Farrugia on drums) with violinist Zoe Black and a string quartet.

In my favourite festival venue, Chapel Off Chapel, there are delights in store. Guitarist Ben Hauptmann will feature two incarnations of his dream band BOB, opening with an unplugged set and ending the festival on a high note with a plugged-in set. On the previous night, James Annesley Quartet will bring us a taste of Dylan, Davis and John Sangster before (I have to check the order) Paul Williamson’s Hammond Jazz Party kicks off Tim Neal on the B3 to make me swoon. 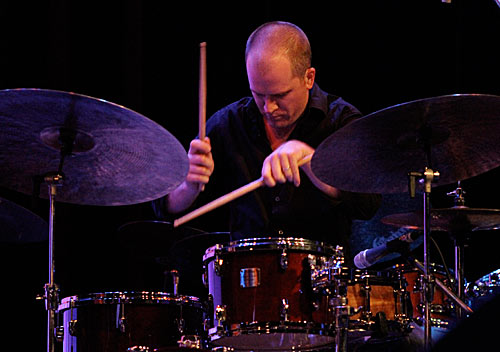 Big band lovers will want to hear the 19-piece Tim Davies Big Band — drummer/composer Davies is in LA these days — and on the night before there’ll be award winners on tap, with 2012 Young Australian Jazz Artist of the Year Alex Boneham featuring in the James Muller Quartet (let’s hope Muller on guitar lets fly for the folks) and 2011 Wangaratta National Jazz Awards winner Tim Firth on drums leading his band, which includes that Boneham fellow again.

One big bonus is a free daytime workshop on May 24 on “How to construct a meaningful jazz solo”, but you have to book.

That’s it for the Ausjazz highlights and of course the preview has ended up covering just about all the gigs. But the ones I’m really hanging out for, if pushed, are Allan Browne’s Poetry of Classic Jazz, the Muller/Firth combo, the brothers McAll displaying their sibling rivalry, Mad Men, the Hammond Jazz Party gig and hearing BOB go from unplugged to plugged in.

Stonnington Jazz program and booking details are on its website.

This entry was posted in STONNINGTON JAZZ 2012 and tagged Stonnington Jazz. Bookmark the permalink.

2 responses to “IT’S ALL HAPPENING AT STONNINGTON JAZZ”