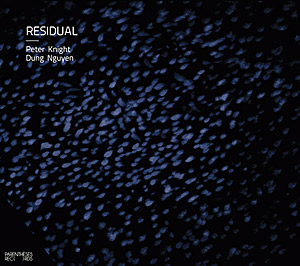 Fans of the successful and popular jazz ensemble Way Out West, of which Knight and Nguyen are members, may find this album a shock to the system. Knight’s performances with solo trumpet and laptop would be a better preparation for this excursion into new music.

Parentheses Records’ website has links to a number of reviews, some quite long, and an article by Knight in the Australian Music Centre’s Resonate Magazine.

I think one difficulty in assessing this music is that the intention to detail of the creators and the subtleties of the end product may be quite separate from what is perceived by the listener. Another is the perennial tension between giving a description of any music (in order to give the reader an idea of what to expect) and the need, in a review, to critically appraise or assess how well it works.

There is no simple solution to these issues, and raising them is probably a stalling tactic. So, on with my succinct review. Residual is at times filled with brooding, building intensity (as in the opening, title track) and at others (as in Travelling) makes an excursion into quite strong, even abrasive, rhythmic patterns that also gather potency over time. Minky Star swells and pulsates with sonic textures suggestive of a living, breathing organism that may be experiencing a variety of physical or emotional states, many of them unsettling. The pulsating effect is texturally grating and mesmeric, rather than necessarily pleasant. Phase Pedal is dominated by increasingly insistent percussion, behind which are prolonged or stretched notes which complement, but never come into the foreground.

In the final track of this relatively short rendition of Knight’s compositions, Autumn Music, we are treated to the flute-like sound of a trumpet played without the mouthpiece and the shimmering, bending notes of Dung’s single-stringed dan bau. It is the most immediately appealing piece on the CD, possibly because it has more in common with some of Dung’s contributions to tracks from Way Out West’s albums in which he demonstrates his virtuosity on traditional Vietnamese instruments.

Does it work? Yes, but within the confines of music that is exploratory, challenging and compelling rather than in any way swinging, toe-tapping or melodic. It definitely has the tension which is often important to command attention, but it is “serious” rather than “fun” music. There are hints of jazz and of Asia, but this is taking a new direction.