Tag Archives: The Hour of Separation

IS JAZZ, IS OUD 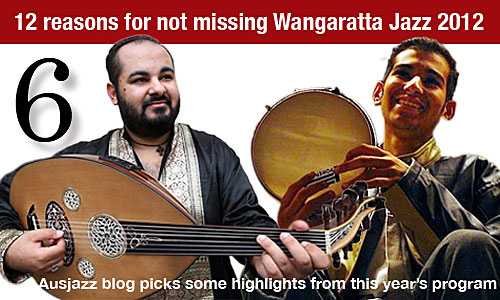 6. THE TAWADROS BROTHERS IN A DIFFERENT LIGHT

The hour of separation is fast approaching, when music lovers will leave the humdrum and mundane world of the daily grind behind and head to the Wangaratta Jazz and Blues Festival which opens on Friday, November 2.

Ausjazz blog’s sixth festival highlight for 2012 is the Joseph Tawadros Jazz Project, featuring Egyptian-born oud player Joseph with his brother James on percussion using a tambourine-like instrument called the req, which he makes sound like a drum kit, and a bendir (frame drum).

This concert will provide a different perspective on the Tawadros brothers, who their critically acclaimed album The Hour of Separation were joined by John Abercrombie on electric guitar, John Patitucci on double bass and Jack Dejohnette on drums. The brothers will be newcomers to the Wangaratta stage.

Joseph has released eight albums, all nominated for ARIA Awards, has won five Limelight Awards and is a recipient of the Freedman Fellowship for Classical Music.

At Wangaratta the Tawadros brothers will play jazz, in a quartet with Steve Hunter on bass and Matt McMahon on piano.

Andra Jackson wrote about the Tawadros brothers in a recent article entitled From ancient strings, a new mood for the oud