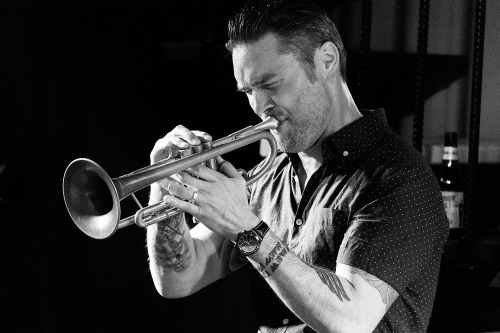 Paul Williamson leads his quintet to launch “Finding the Balance”.

The Jazzlab was packed for this outing, the musicians attracting enthusiastic applause. Some images from the gig are below. 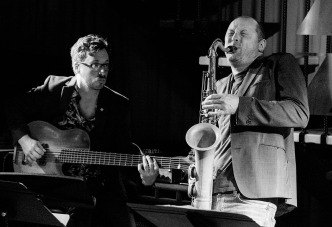 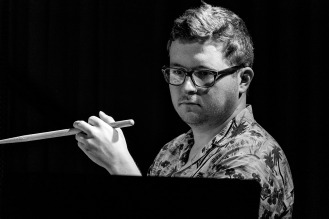 James McLean at the drum kit.

Andrea Keller at the piano, Paul Williamson at the mic.

It was a significant milestone last night when Peter Knight‘s ensemble Way Out West played in Footscray at the venue in which the band — with a slightly different line-up — played its first gig 14 years ago. It was also significant in that the MIJF was venturing out west for the first time this year.

Yay! A crowded house for jazz out west.

It was a relief to see that the seats in the FCAC Performance Space were filling quickly. Westies are waking up to the delights of live music.

I rarely post images in colour (more of that in a moment), but in this case the lighting complemented the array of instruments assembled on stage for Way Out West musicians, who must need a large truck to carry their gear. There are two versions of the Japanese koto for Satsuki Odamura and a bewildering array of drums and percussion devices played by Ray Pereira — he seems to add an instrument every year.

In the red: what unkind lighting can do to Raj Jayaweera on drums and Paul Williamson on tenor sax.

Waiting in the dark on the side with the young photographers clad in light blue MIJF T-shirts before the performance, I wondered what the lighting would be like. Let’s face it, lighting is only of concern to photographers and not punters, but that does not mean it is unimportant. In most venues it is passable at best. Often one or two members of a band are in bright light, the others all in darkness. The wonderful red spots are the bane of music photographers’ lives.

When the lights came up, and we had two songs in which to take our shots (a rule seemingly ignored by the T-shirted snappers), I groaned inwardly. Again, I understand that audiences do not care about lighting provided the music is good, but we take photographs to help promote the bands and the music, and to attract more people to live music. Let’s just say that the image above shows what happens in red light. The image below shows why many photographers turn shots into black and white in a bid to resurrect what they can.

In the black: Raj Jayaweera on drums and Paul Williamson on tenor sax.

While on about photography at gigs and festivals, controls are vital to protect the listening experience of patrons and in order not to drive musicians mad. But the rule of first two songs only has its problems, because in jazz that could be very short or very long. And the imposed limit means that the clicking is going to go on regardless of whether the first two songs are quiet or not, because that’s the only window of opportunity. Really it would be better if photographers respected the music and did not shoot at all in quiet passages. Unless, of course, they can afford completely silent cameras. I’m still searching for an affordable camera that is completely silent and yet copes with low light. 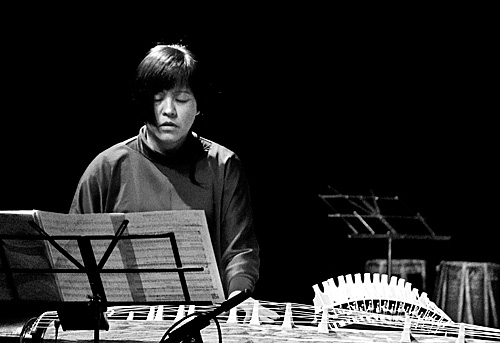 Way Out West played four new compositions — Latest and Breaking, The Birds, Nine Years Later (dedicated to Peter Knight’s son Quinn, 9) and Anthony Blaise. The oldies were Music For April and the closing Is the Moon Really This Far Away? This post is a rave with pics rather than a review, but I loved the new material, especially The Birds and Nine Years Later. 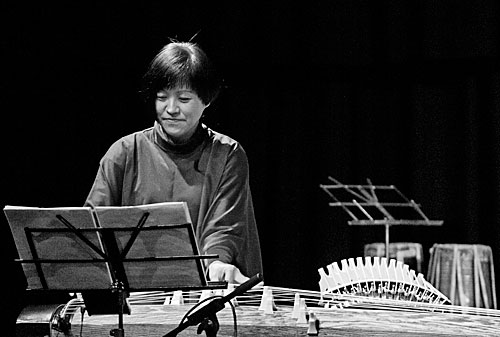 The main changes in line-up to Way Out West have been the addition of Odamura on kotos and Lucas Michailidis on guitar. With a new album coming out soon (more details later), the band has moved on and is entering a new era with a different feel. It works. The new pieces utilise the koto well, as well as Pereira’s diverse talents.

Michailides is another significant addition and he brings exceptional musicianship along with an ability to sync with other players.

Peter Knight on trumpet and flugel was in fine and fiery form on the horns, but for me his work on laptop in Nine Years Later was the highlight.

Paul Williamson pumps it out.

Paul Williamson is a seasoned and spectacular performer. In this outing I felt that he and Howard Cairns, along with the New York resident Raj Jayaweera did not have enough time in the spotlight. But the nature of this ensemble is that it works as a group, so it is not about solos.

That said, it would not be Way Out West without Ray Pereira in a drumming duel with someone. In this case it was guest Sri Lankan drummer Kanchana Karunaratna, who wowed the crowd with their rapid-fire technique and virtuosity.

Everyone loves a good drum stoush, but I loved this band’s layered subtlety best of all. 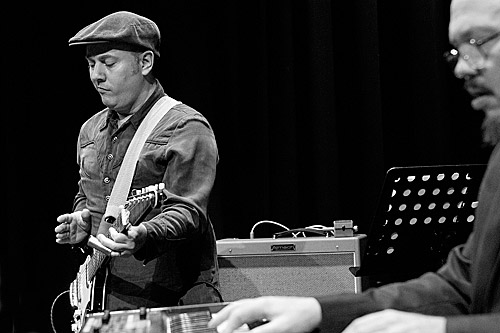