SHAKEN AND A LITTLE BIT REHEARSED

Ausjazz blog takes a look at how singer/songwriter Monique diMattina has taken some song ideas through customs, taken a flight overseas, and come home with a new album

It’s an intriguing and original way to record an album: Take an idea provided by someone else, spend 45 minutes writing lyrics and a melody, carry those ideas on a plane to New Orleans, team up with some fine musicians and lay down the tracks at Piety Street in the Bywater.

That’s how Monique diMattina made her fourth album, Nola’s Ark, on a pilgrimage to New Orleans, Louisiana (NOLA to the locals) when she was 20 weeks pregnant.

The imaginative approach to song writing is not new for diMattina, who appears weekly on Tim Thorpe’s 3-RRR program Vital Bits for her Shaken Not Rehearsed segment, in which she writes and performs a song within an hour, based on listener’s requests.

The gestation of the second track on Nola’s Ark, Dig A Hole, is an example of how this creative and courageous process works.

First, there’s the challenge, issued by diMattina over the radio waves: “I’m here to write a song, every Sunday, so at 7.45 the challenge is out there. Call in and give me an idea and I’ll run off and write it.”

Then comes the idea.

A listener rings in: “I want to have my Saturday morning lovin’, but I’ve got to go out and dig trenches because of all the rain.

diMattina: “Oh, don’t you hate that.”

Listener: “I had to, yesterday.”

diMattina: “So you want your Saturday morning lovin’, you have to get out from under the doona, put on your … “

Listener: “Get the shovel out of the shed, and dig trenches down the side of the house so little rivers will escape my property.”

diMattina: “And who’re we talking to?”

The delivery: In 39 minutes, diMattina has lyrics and a melody for Dig A Hole For Love.

Come on babe hug me ‘coz I’m feeling all right

It’s warm under the covers gonna take you for a ride
She says “Hold on baby what you tryin to do?
you knooow I can’t stay and get hot with you –
‘cos the water’s risin, so quit your cryin and
Pick up a shovel dig a hole for love

This is a familiar routine for diMattina at 3RRR. On her website, she explains:

“Assuming I arrive on time, listeners call in 7.45am with a song idea. I hole myself up in Studio B, pray to the song gods, align my chakras with a complex ritual involving caffeine … and more caffeine … and receive whatever chaff they throw me.

“Some time just before 9am I play the fresh-born song live to air, coughing, spluttering, covered in vernix, but usually alive.”

Another caller, Rick, rang in after a Melbourne summer downpour wanting a song about the release of rain on the dry, dry earth. He had a property in Gippsland.

“I was struggling a bit, Tim,” diMattina says on air.

“It just felt like a bit of a boring song about rain and stuff and then I remembered the feeling, when I was living in Harlem when Obama came in, and Rick said, if release had a smell that the smell of the earth after rain would be it. And that started to strike a nerve with me, so that helped me along.”

The result was the song Bring On the Rain.

diMattina does not shy away from serious topics. Her song Godzilla is a response to a request from Steven, who had been watching footage of the devastation caused by 2011’s earthquake and tsunami on Japan and its nuclear reactors. He likened the images to Godzilla stomping across Japan.

As diMattina originally sang Godzilla on Triple R, she did without her piano “in solidarity with our friends in Japan”.

At Piety Street, the line-up for Nola’s Ark was diMattina on vocals, piano, Wurlitzer and Hammond organ, Leroy Jones on trumpet, Rex Gregory on clarinet, Loren Pickford on sax, June Yamagishi on guitars, Matt Perrine on acoustic bass and sousaphone, Eric Bolivar on drum, Richard Scott on accordion and Anthony Cuccia on percussion.

The talented ensemble is used to good effect on the five hastily written and four other originals, plus standards Young at Heart (Richards/Leigh), Let’s Do Something Bad (Matt Munisteri), I’ll Be Seeing You (Sammy Fain/Irving Kahal) and Numb Fumblin’ (Fats Waller).

If it seems surprising that songs written on the run could work so well when taken into a New Orleans studio with musicians new to the composer, it’s worth taking on board diMattina’s long affection for the music from NOLA.

In her album notes, she writes that all her life she has “loved and lived off the sounds and spirits of this swamp, that cross time, swim seas, pump blood for dancing, singing, crying winging, for suffering, truth, for soothing, sneaky grooves that move and woo”.

It would be interesting to know whether the five people who rang in with their ideas to Triple R are aware that they inspired a song that would be recorded overseas. And diMattina’s approach to composing raises the possibility of jazz fans turning up at gigs with a riff or two they want turned into a tune to be played on the night.

If instrumental “jazz karaoke” does take off, you heard it here first. 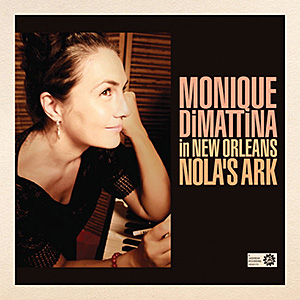 Nola’s Ark is being launched on Friday 24 May at Chapel Off Chapel as part of a Stonnington Jazz concert with singer/pianist, Kate Kelsey-Sugg.

Monique diMattina studied at the VCA in the mid 90s, then studied and worked in the US. Her earlier albums are Senses (2007 Elwood Records), Welcome Stranger (2010 Head Records) and Sun Signs (2011 Head Records).

Nola’s Ark is released on Jazzhead.

Monique diMattina has some of her Triple R songs on her website.