Alto saxophonist Martha Baartz was lost to the Melbourne jazz scene when she returned to northern New South Wales a while ago after 12 years down south, but she has visited for MWIJF gigs in 2010 and 2011. 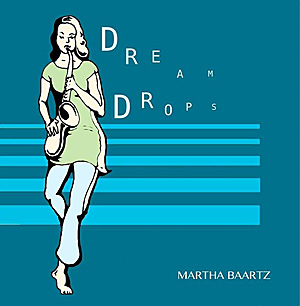 This year Baartz is launching her new album, Dream Drops, at the festival and drawing on a stellar line-up of Paul Williamson on tenor, Bob Sedergreen on piano, Greg Lyon on electric bass and Sonja Horbelt on drums.

Baartz has featured original compositions on her earlier sextet albums with guitarist Lliam Freeman. Southeast (2003, Move) included five Baartz pieces and 12 Salutations (2005, Newmarket) had six of her originals, including a favourite of mine, Jungle of Flies.

Stephen Grant‘s trumpet is not in the Dream Drops line-up for the recording and Jim Kelly replaces Freeman on guitar. The rest of the band consists of Stephen Russell on piano, David Sanders on drums and Lyon on electric bass.  Jack Thorncraft plays double bass on the final track, Johnny Green’s standard Body and Soul.

The relaxed, even languid feel of northern NSW seems to have permeated this album, which displays the fluidity and ease of Baartz’s sax work these days. She is obviously having fun and that comes through on this CD.

Dream Drops sandwiches four Baartz originals between two standards. A lively, lightly swinging version of Jimmy Forrest’s Night Train opens the album  and a live rendition of Johnny Green’s classic Body and Soul, recorded at the Brisbane Jazz Club, wraps it up. On a relatively short album (in other words, I’d have liked to hear more) this 10-minute standard is a highlight, with Baartz displaying great finesse and subtlety, as does Russell on piano. I found this interpretation a beautiful reminder of why we warm to standards.

Of the originals, Walking in the Moonlight is warmly melodic and the title track exemplifies the gentle interaction of Baartz and Kelly on sax and guitar. The First of July includes a great solo by Russell.

Dream Drops is music to infuse a sunny disposition into your day or night.

Now here’s a preview of this year’s Melbourne Women’s International Jazz Festival. I’m going to miss some of these concerts due to night shifts at work, but there are plenty of treats in store for those able to be there.

A graduate of the Sydney Conservatorium of Music in 2012 with a Bachelor of Music, (Performance), Jazz, Michael returned to New York this year for further study. Her trio of Michael on drums, Steve Barry on organ and Carl Morgan on guitar will endeavour to present a music that expresses the drummer’s “love for all styles of music, something that highlights the `broken’ quality of music; an adventure of sorts into music, breaking it up and putting it back together rhythmically and structurally, communicating what I had found in the process of exploration”. 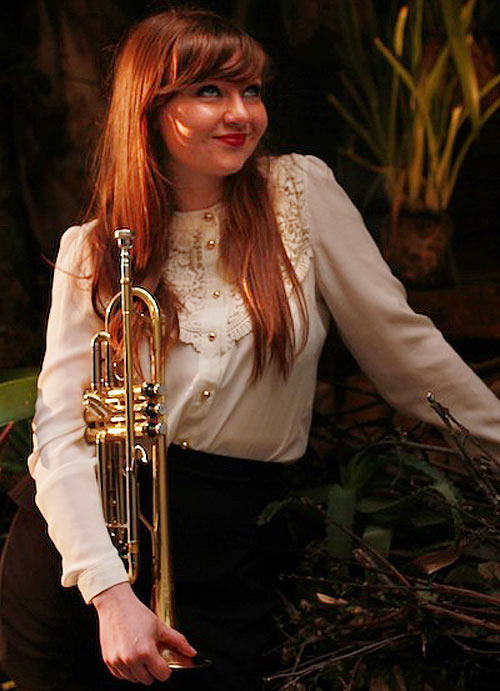 A Melbourne trumpet player, composer and improviser, Boyle graduated in 2012 from Monash University with Honours in Music Performance. She was the 2011 recipient of the James Morrison Jazz Prize as part of the Melbourne International Brass Festival. She has performed with Don Burrows, James Morrison, Tony Hicks, Adam Rapa, Kendrick Scott and Terence Blanchard. Her quartet will comprise this year’s National Jazz Awards winner Joseph O’Connor on piano, Marty Holoubek on bass and James McLean on drums.

Allan Browne, Andrea Keller & Tamara Murphy formed their trio in 2003 for the MWIJF and continued intermittent performances on Monday nights. Now they have recorded their “tender tapestries” on an album that “seems to know the B-line to the beating heart of your ear”. Multi-award winning composer/pianist Andrea Keller joins talented and awarded bassist Tamara Murphy to “bring to the fore the feminine and the poetic side” of drummer Allan Browne as they collaborate to feature compositions from the trio’s debut album Carried By The Sun. 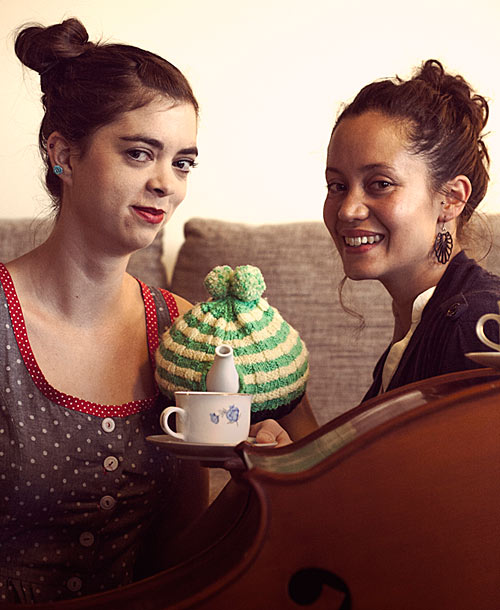 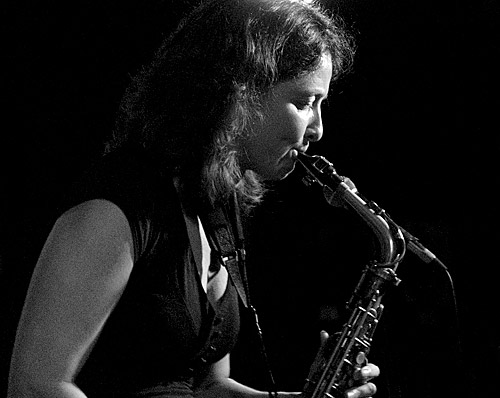 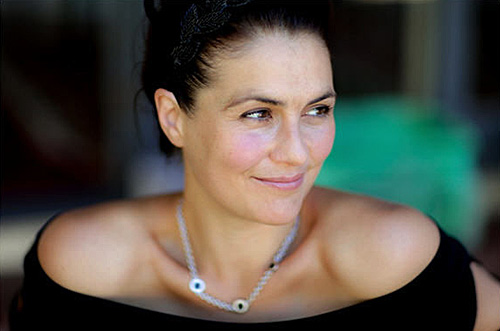 A creative rhythmic vocal stylist and improviser who incorporates Indian and African elements, Young has been a long-time student of maestro Guru Kaaraikkudi Mani in Chennai. Specialising in South Indian vocal percussion, Young has performed with vocal group Coco’s Lunch and her quartet. In a rare Melbourne performance, she will play with her award-winning quartet featuring Ben Robertson bass, Hugh Stuckey guitar and Danny Farrugia drums to performing the song cycle The Eternal Pulse and other favourites.

Curated by vocalist/composer Gian Slater this series of concerts celebrates the abundance of distinctive, innovative vocalists in Melbourne’s jazz and contemporary music scene in Melbourne. For the MWIJF the series features vocalists Clio Renner, Helen Catanchin and Hailey Cramer presenting original music with their ensembles.

Clio Renner: A recent VCA graduate, Renner fuses pop song form with improvisational elements to deliver a musical tapestry woven with Folk sensibilities and Art Song poetics. Renner (voice, piano) will be joined by Steve Hornby on bass and James McLean on drums to explore the relationship between piano and voice as lead instrument and accompaniment.

Helen Catanchin: While completing a Master of Arts (Music Performance) at Monash University, Catanchin focused on wordless singing. She created 10 new works created explore the aesthetic, expressive and abstractive potential of a range of wordless vocal sounds, juxtaposed against the limits on lyrics. Catanchin’s MWIJF performance will feature this new music and earlier works. Catanchin will be joined by Ben Edgar guitar, Luke Howard piano, Philip Rex double bass and James McLean drums. This intensely personal music has been described as “melodic and reflective, lush, tender and at times raw”.

Hailey Cramer: Reputed to be one of the most interesting artists in Melbourne’s burgeoning electronic-infused soul scene, Cramer featured on the hit collaboration The Festival Song’ with rapper Pez and has performed with Michael Franti, 360, Mark Levine, Paul Grabowsky and Blue King Brown. She released her debut self-titled EP last year at the Toff. Working alongside producer Dan West, Hailey has sculpted a remarkable sonic landscape that draws on her musical past while revealing her eclectic musical inspirations and aspirations. Cramer’s vocals will be accompanied by Justin Marshall percussion and bits, Dan West beats and bits, with backing vocals by Zoe Kalenderidis and Joanna Lavell. 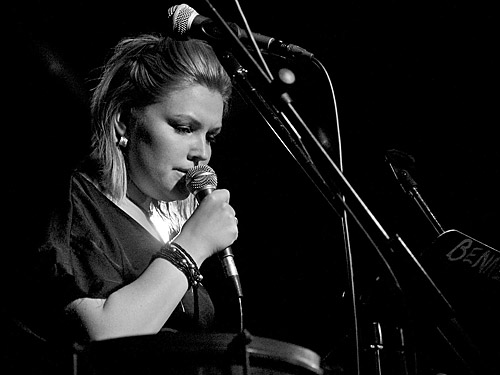 Jazzgroove Mothership Orchestra, Chapel Off Chapel, Monday, May 23 as part of Stonnington Jazz, 2011

An earlier post recorded Joseph O’Connor’s win in the 2011 National Big Band Composition Competition, with his piece Rationalisations. Runners up were (in no particular order) Cameron Earle and Alice Humphries. There were 22 entries, so making the finals was a significant achievement and conducting the JMO must have been a thrill. I arrived late (not following festival artistic director Adrian Jackson‘s advice to “read your program”), so I heard only part of Earle’s piece, Run Run. What I heard was vigorous and pretty full-on. 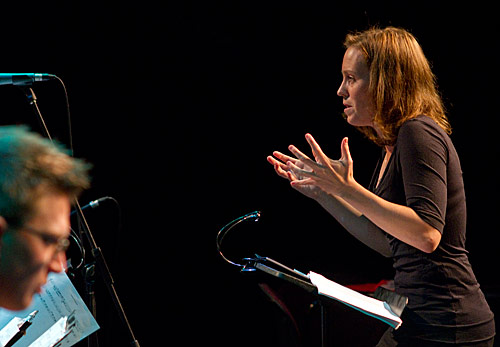 For the record, if I’d had to judge I would have favoured Humphries’ composition The Mending, which had a strong feeling from the beginning that it was heading somewhere as well as the light and shade evident also in Rationalisations. I love that feeling of tension and sense of momentum, especially from a big band. The Mothership Orchestra really delivered in all three competition pieces.

Band leader David Theak kept us in suspense during Mike Nock‘s piece Hadrian’s Wall, arranged by Murray Jackson, which began the second set. Then he announced the competition winner before the orchestra played Florian Ross‘s Teen Adventure, with solid solos from Mike Rivett and James Loughnan, and the trumpeter buried up the back on the right. 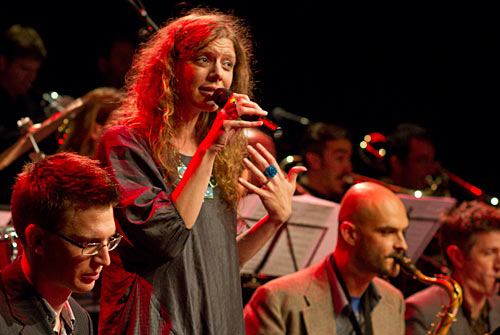 Kristin Berardi aboard the Mothership

For a vocals skeptic, which I usually am, this was a valuable part of my education. Berardi’s gestures are compelling and her voice equally so, with depth, dynamic variation and range. I can’t write technically about vocalists, or much in music for that matter, but I found myself making a comparison (actually a contrast) between Berardi and Sarah McKenzie. They are, obviously, very different kettles of fish (do fish come in kettles?).

Berardi’s voice has something very distinctive and I warmed to that. I especially loved her song Mr Jackson, about a man in New York who had a lot to say. I felt it succeeded in conveying the feel of this man and could almost picture him rabbiting on. This piece was really swinging and highlights from the band included contributions by Hugh Barrett and Brendan Clarke, Jamie Cameron and a trombonist (not sure of his name). 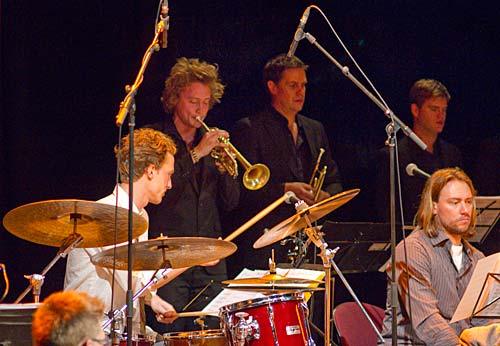 The JMO finished the set with a premiere of Jackson’s composition Who Do You Think Of Now — in which his solo included some fantastic gobbledegook, squeaky, all-over-the-place stuff that can give you goosebumps, and Lucian McGuiness and Hugh Barrett made strong contributions — and Mr Dodo (Bert Joris), which began with some exciting horn from Ken Allars and followed with a tenor solo from Richard Maegraith before a really tight interlude leading back to Allars’ trumpet. 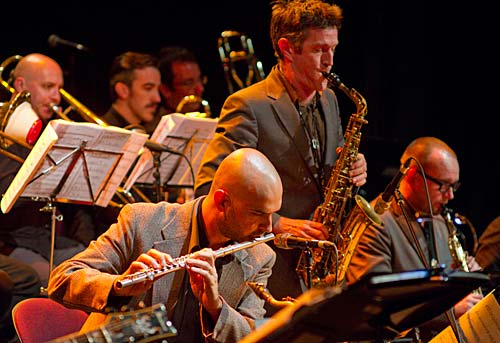 Murray Jackson on sax, Richard Maegraith on flute with the Mothership Orchestra

I thought the audience could have scored an encore, but it wasn’t to be. Pity. The whole gig seemed to pass very quickly, but, when you take into account the work involved in rehearsing the competition compositions, this was a busy night for a big band that always seems to shine.

I really enjoyed what the band and conductors did with the three pieces in the first set. Second set highlights were Berardi’s Mr Jackson and the playing of Allars on trumpet.

I should get out to hear more big bands, such as Bennetts Lane Big Band and ATM15, but the Jazzgroove Mothership Orchestra can land in Melbs any time.