THE STING IN THE TAILFIN 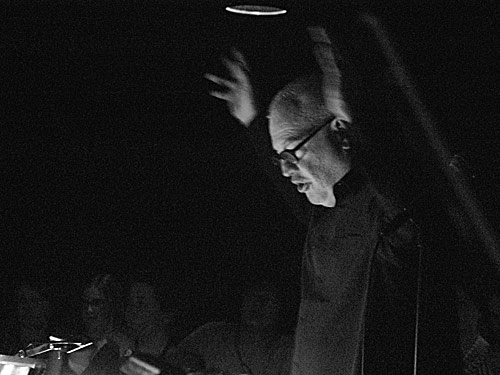 Take two groups of musicians, add Paul Grabowsky and stir. The result is bound to be interesting.

In this case, Grabowsky as Musical Director has gathered six students from the Sir Zelman Cowen School of Music and teamed them with seven members of the renowned Australian Art Orchestra to form Shapeshifter — “a dynamic new ensemble of 21st Century musicians”. 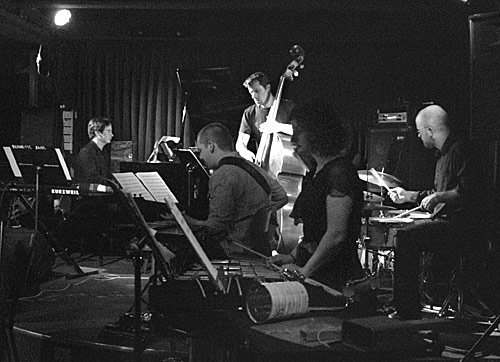 In the first set, the ensemble played Variations (2001), based on a melody from the Suite du’n Goût Étranger (Suite in a Foreign Style) by 17th Century viola-da-gamba virtuoso Marin Marais. As Grabowsky explained, the piece puts the melody through a series of costume changes, each paying homage to composers past and present: Ennio Morricone, Lennie Tristano, Cecil Taylor, Miles Davis, John Coltrane, Ornette Coleman, J.S. Bach and Olivier Messiaen.

Described in publicity material as “a kind of chamber concerto showing off the virtuosity of the players”, Variations would probably send a shock wave or two through any audience used to classical chamber music. Opening with pre-recorded music over which trumpeter Eugene Ball introduced squeals, whistles, growls and farts, the piece was often frenetic and often displayed dissonance or even discordancy.

Philip Rex on bass, with and without bow, helped mightily in the onslaughts, assisted by the superb Dave Beck on drums and percussionist Shanie Klas beating a small tin as if her life depended on its bell-like sound. A dirge of saxes was overlaid by upper register horns from Scott Tinkler and Ball. 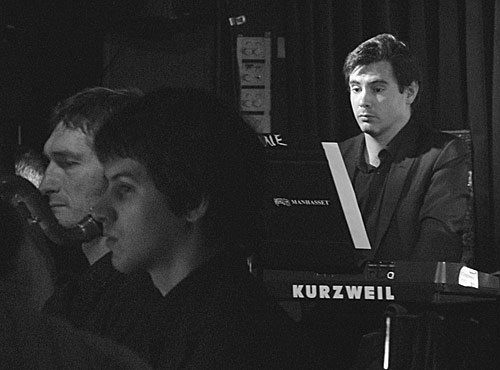 Joe O’Connor (keyboards) delivered some fierce runs, the notes well dug into the ivories. Brendan Toohey on bass clarinet added to the chatter of saxes in some bursts of AHBL (all hell breaking loose). James Macaulay‘s trombone worked well with Beck’s ‘plosive’ attacks and Dan Mamrot on guitar added significantly to what was a rich repertoire of timbres.

Variations was amazing, though I am sure I did not catch anything like all of its allusions of homage to composers. I would have to say it left me more marvelling than moved, but there was more to come from Shapeshifter after the break.

The second set opened with Tall Tales, a three-movement suite Grabowsky wrote in honour of filmmaker Fred Schepisi on the occasion of his 70th birthday. The first movement, Ngukurr Mon Amour, is based on the structure of manikay, the traditional song cycle form of the Yolngu peoples of Arnhem Land. The second, …and a bier for young Arnie is informed by the music of the young Arnold Schoenberg, and includes a miniature alto saxophone concerto. The third movement is entitled Wacky, Zany, Madcap.

This piece quickly had me convinced it would be the standout of the night. From the first movement, which opened with Welsh’s violin acting as a drone to Rex’s vigorous bass, it was compelling, energy-filled and intense. To me, this was a better showcase for the ensemble than Variations, especially as epitomised in the work of Tinkler, Tony Hicks on tenor sax over the rhythms of Rex and Beck, Lachlan Davidson‘s alto saxophone when fired up, Macaulay’s classy ‘bone, which had Grabowsky clapping, and in some brass salvos fired as if by instruments of war.

Grabowsky as conductor was lively, active, perky, vibrant, vital, zestful, not to mention eager, zealous and spirited. His hands darted into the air as he urged the players onwards and upwards to new heights, demonstrating the drive that will no doubt propel Shapeshifter as it develops and explores new material. 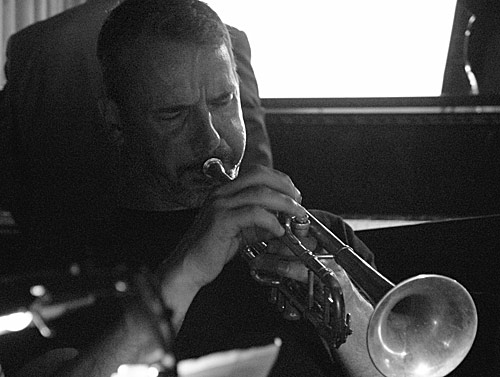 Unexpectedly, it was the closing composition, Grabowsky’s Tailfin, which left the strongest impression in this outing. This was a new arrangement of a piece composed in 1992 and released on the albums Viva Viva (1993) and Tales of Time and Space (2004). I was struck by the different feel of the piece in the hands of Shapeshifter — compared to the Time and Space version it was more weighty, with more depth and guts.

Beck led us into it with a long introduction effectively using brushes over the slow thump of the bass drum. When Tinkler got to the serious business of the key solo he drew applause and a call from Grabowsky to “play that again”.

Another place: Welsh and Tinkler

The other horns painted a slow, solemn picture behind Tinkler, before Welsh’s violin took us to another, primal place in tandem with Mamrot on guitar. O’Connor on piano released the tension, making way for Toohey to usher in some twists and turns against the backdrop of Rex, O’Connor and Beck.

This rendition of Tailfin was still spinning in my head long after I left the venue in a mad dash for the train. It remains the standout for me in an outing that showed Shapeshifter to be no mere will o’ the wisp.