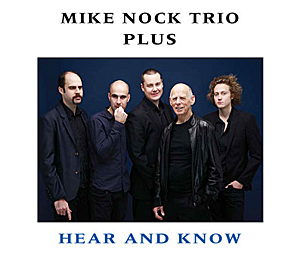 This trio’s first album, An Accumulation of Subtleties, was a triumph, demonstrating on two discs how well the Waples brothers work with Nock’s presence and mastery. Hear and Know is altered radically by the addition of horns — it is fascinating to hear how the “plus” of sax and trumpet influence the character of this album, often expanding the sound to wide vistas of cinematic proportions.

The result is a richly expressive foray into varied moods and styles, making this outing full of interest. The opening title track demonstrates this, moving through intimate piano and bass to sweeping ruminations of brass, with an intricate overlay of bass, before a lively jaunt. The diversity continues with slow, soaring horn interplay in The Sibylline Fragrance, a whole forming from fragments in the melee of Colours, and a minimalist opening stretched in scope by soaring horns in After Satie.

Komodo Dragon is a feast of melodies and conversations with an entree of staccato trumpet and breathy sax, while If Truth Be Known is big, powerful and eventually swinging, underpinned by Nock’s deep, grumblings and topped by strident horns. Gathering intensity is also evident in the closing Slow News Day, suggestive perhaps that some late wire taps eventually produced a front page.

Laskowski and the exciting Allars add a great deal to this collection of Nock originals, though for me it’s not quite enough to top the trio’s earlier Subtleties.

Hear and Know illustrates again that Mike Nock is always on the move and never stuck in the here and now.

This album includes a booklet of photographs taken by Gerard Anderson. 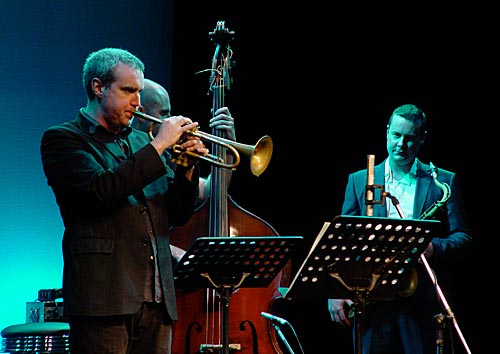 AFTER the vibrant, energetic opening piece, Hop, Skip, Jump, Mike Nock told the audience, “This is jazz. It may seem to be arranged, but things happen. It’s spontaneous. So it’s always going to be new to us.” But this ensemble — yet another group for the irrepressible Nock — was so tight it was hard to believe they had not rehearsed a set script for weeks. Nock can immediately take a piece to a higher level and he did so here, with sweeping vistas and ringing chords to hang suspended.

Slow News Day — was this inspired by the decline of newspapers? — opened with resonant, slow, sustained piano with plenty of space. The mood was wistful, with Phil Slater adding dimension to the sound. Horn notes bent as sax and trumpet interleaved before a fiery Slater solo with sizzling vibrato slowing to a stately finish. James Waples added drama, Ben Waples contributed a strong but melodic solo over Nock’s sensitive chiming chords. Nock lyrically returned the piece to the ensemble and the wistfulness returned.

This post is burbling on and ought to be more concise. After Satie, a tribute to French composer and pianist Eric Alfred Leslie Satie (1866 – 1925) wandered through harmonies, with the horns playing tag and catching each other in a meadow of lush lyricism. The beat built before the horns swept serenity and splendour into the sky. Nock closed with a rainbow.

Well that may have been a bit over the top, but that was the highly subjective imagery that came to mind. 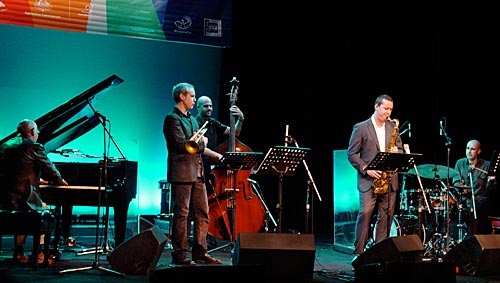 In Speak to the Golden Child, deep chords established a grounding that was picked up by bass and drums. This was rhythm driven. Horns built the intensity, piano built the sense of swing and sax drove that further before Slater entered the fray. He was really into it, notes screaming and flaring and squealing out of the trumpet bell. Great instrument. Great player. Nock’s contribution was light but emphatic, his notes touching the top of the swing and dancing along it. Then he was bolder, and the drums seemed to take just a little while to jell, but then it worked. The horns finished it.

Mike Nock knows, as Megg from Bennetts Lane once commented, how to work an audience. He starts with pieces that are accessible, winning hearts and minds before stretching them a little. Choices was the final piece of the set and it took us into that glorious territory that can really be enjoyed if you let go, as if on a rollercoaster. Sax and trumpet opened a dialogue early, the piano attempted to calm, but the horns burst out in rapid fire. There were delightfully robust harmonies in a horn duel, then drum attacks and a dull rumble from piano and bass. It was fragmentary music, with sharp bursts and changing patterns. Eventually the piano lightened proceedings and the horns delicately followed. Melody crept in and the horns echoed it.

Wangaratta Jazz was launched with finesse and verve.

Pictures? Well, the powers that be have banned picture taking in the arts centre venues, though I noticed that was honoured largely in the breach for this concert. I am disappointed that those of us who have silent cameras and do not move about are not given some licence to take a few shots, because this is history. As a reviewer, I also like to look through images to as an aid to my failing memory. Well, we’ll work on that issue.

AN accumulation of creativity, spontaneity and vibrancy, this double CD is the deeply satisfying result of a Sydney Opera House Studio session and a weekend live at Sydney’s Sound Lounge, both recorded in 2008.

With no agenda in the studio “except to allow the music to come through”, Mike Nock on piano, Ben Waples on double bass and brother James on drums, converse with compelling clarity and understanding that taps the source of great art. Notes in Joyous Awakening hang suspended, their beauty in simplicity and gentle dissonance. The fragmentary Rite of Passage evokes the birth of music as if from a primeval swamp.

The live pieces are equally eclectic, moving from the evolving patterns and tempos of Elsewhen, through the upbeat Beautiful Stranger to the expansive, lyrical ballad The Wind. Nock’s A Tree Has Its Heart In Its Roots is a triumph of strength and fragility, sustaining depth and compelling intricacy.

A slightly shorter version of this review was published in the Sunday Herald Sun’s Play liftout on July 11, 2010