The nine movements of the composition visiting trumpet player Dave Douglas wrote for the Monash Art Ensemble seemed to flash past, although the performance must have lasted well over an hour.

Before we get to the music it’s worth mentioning one highlight that came in the form of words, spoken by Douglas after the sixth piece, Unknowing, Forgetting, which was written principally for the brass group. After sitting in with Jordan Murray on trombone and Niran Dasika and Ben Harrison on trumpets, Douglas paid tribute to students Dasika and Harrison.

“I’ve been humbled before them,” he told the audience, before saying it was incumbent upon young Art Ensemble members as the next generation to take the reins, “lead us forward in music and be 10 times as good as we are”.

Douglas’s tribute was surely a moment for Dasika and Harrison to treasure, but also an insight into the value this visiting composer placed on the potential of an exciting ensemble that has been nurtured by Paul Grabowsky. It was another encouraging sign that talent and commitment are not hard to find among our young musicians — though fair remuneration for their efforts may be elusive.

The idea of Douglas’s Fabliaux suite, which harks back to the often bawdy and (he said) these days possibly offensive comic tales of medieval literature, was for the players to be grouped into reeds, brass, percussion and strings, with every group taking a primary role in a piece between those involving the whole ensemble. Nothing was locked in, because Douglas worked with the MAE to develop the suite through improvisation.

The changes of emphasis made the whole suite alive and interesting and there was, literally, never a dull moment. The opening piece, Forbidden Flags, soon introduced us to Australian Art Orchestra artistic director Peter Knight‘s carefully crafted electronic “static”, which added textural interest throughout the evening and always complemented rather than sought to dominate. There was a lot happening in this busy, but sombre piece. Douglas’s direction was ever present, but he did take up his instrument before the end. 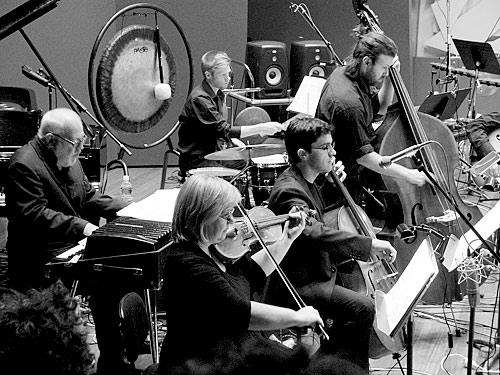 Strings plus Grabowsky and Rafferty

Frieze featured the reeds, ushering in some shimmer before notes began to bend and develop sinuosity. There was some Knight chatter, horns were crying then chirruping. Strings contributed their own shimmer. This was sonically interesting, high chatter giving way to barracking with an occasional fart. Then we encountered sibilance and some piercing, high dissonance. I could not help smiling.

Legions had propulsion and gentle swing from the start, but its intensity and power grew, fired by the horns and with Lachlan Davidson taking us on soprano sax journey. Rhythm seemed to be the glue in this piece.

Gears featured percussion and the focus was on the changing interactions between Grabowsky on piano, Kieran Rafferty on drums, Knight’s electronics and Craig Beard on vibes. These four built drama and tension. With those elements, what’s not to love?

Before the fifth piece, Once Again The Mind, Douglas spoke about how the spark of invention can happen at the same time across the globe, and about how some may recognise use of isorhythm and the medieval hocket in this composition. Here’s a link on the  topic that may be interesting.

I heard dramatic statements before slower, quieter interludes. This had a souped up medieval feel. Murray contributed some delightful air-filled ‘bone that was effective when offset by electronic chatter and vibes. The piece provided an exchange of ideas between the horns and the strings with percussion. Rob Burke on clarinet and the strings players showed agitation and there were strong statements to end the piece. 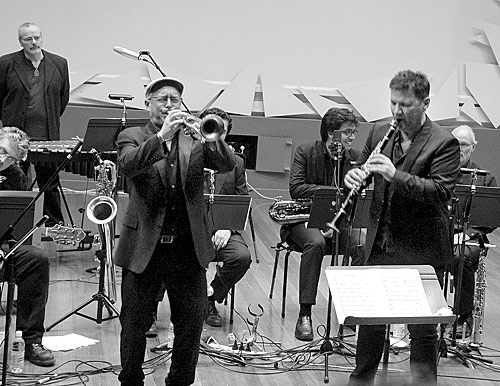 As mentioned, Douglas joined the brass section for Unknowing, Forgetting, in which trombone and three trumpets delivered some chatter and tweet before some wonderfully expressive weaving of notes that displayed how different valved horns can sound. The percussion section helped build pace and intensity before horns closed in unison.

Whirlwhind began with electronic splatter and muted horns. Douglas conducted as layers were added. There was some lovely textured clarity from the strings, then spectacular violin work by Liz Sellers, with plenty of note bending, then mild frenzy and echoes from carefully controlled horns. Mirko Guerrini on baritone sax and Paul Cornelius on tenor added a soft, deep interlude.

I found Whirlwind hard to describe. It had drama, but at times the sections seemed to be talking different languages, while at others there was collective shimmer. Perhaps group dynamics sums it up.

Wagon Wheel featured strings, opening with a sweet refrain that seemed tinged with a lament. A string-pluck festa led us, with help from Craig Beard on vibes, to finally focus on Geoff Hughes‘ guitar — it was good that he had this space.

Tower of the Winds was full of vigour, treating us to a duo of Douglas on trumpet with Burke on clarinet, strong intervention by Knight and Kieran Rafferty on drums and then a Grabowsky piano solo that came with built-in contrast between his emphatic chords and his free-ranging right hand, his digging deep for notes and thunderous barrages. The end of the suite seemed to come in no time.

I’m sure good things are happening in music at universities all across Australia, but as an example of students and experienced musicians tackling an inventive suite written for them to test their mettle, this was an engrossing and invigorating performance.

Fabliaux was  to be recorded in the Monash venue the next day. Watch for it to pop up somewhere.