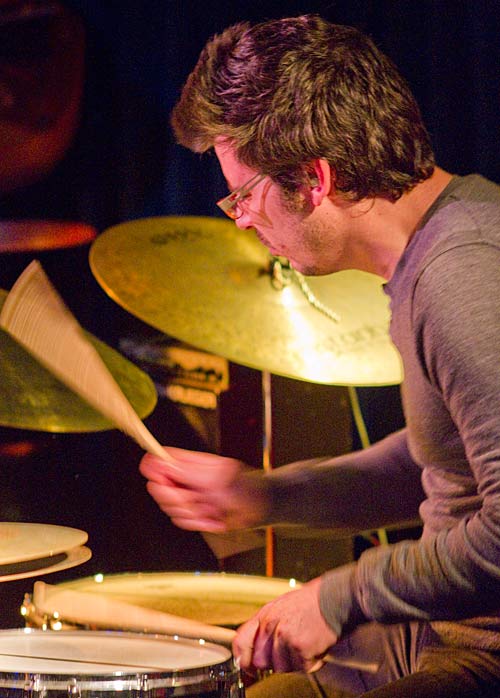 Craig Simon, one of the 2011 National Jazz Awards finalists, at Bennetts Lane.

Duties related to a certain annual report have delayed this post, but if you haven’t heard the latest on the national jazz awards at this year’s Wangaratta Festival of Jazz and Blues then read on.

Ten drummers will perform in competition during the festival, which runs from Friday, October 28 to Monday, October 31 October, competing for a first prize of $8000 and a studio recording session.

For those who are yet to become regulars at Wang, each year the awards focus on a different instrument, and this year finalists will be drumming up a storm accompanied by saxophonist Dale Barlow, previous 1999 National Jazz Awards winner pianist Matt McMahon and 2008 runner-up Ben Waples. The finalists will compete with pieces composed by Duke Ellington, Thelonious Monk, Dale Barlow and Paul Grabowsky, as well as their original compositions.

The best three will then play in the final round at 5pm on the festival, in a performance broadcast live-to-air on ‘Jazztrack with Mal Stanley’ on ABC Classic FM (from 5pm-7pm).

Entries received from across Australia, New Zealand and Japan were judged by that most poetic and versatile of drummers, Allan Browne, a recipient of the Australia Council’s Don Banks Award; pianist extraordinaire Mike Nock (whose album An Accumulation of Subtleties was given four stars by Ausjazz blog when it should have received more, given that I’ve enjoyed it so much); and veteran drummer Ted Vining who has been leading bands for over four decades.

The National Jazz Awards have been presented at the festival since it began in 1990 and were designed to contribute to the development and recognition of young jazz and blues musicians up to the age 35. The awards are a highlight of the Wangaratta Festival of Jazz and Blues.

So, after all that palaver, here are the top ten finalists:

The prizes at these awards are worth playing for. The first prize winner will receive $8000, a studio recording session for ABC Classic FM’s ‘Jazztrack with Mal Stanley’ and an invitation to perform at the Stonnington Jazz Festival in May 2012. The runner-up will receive $5000 and the third finalist will receive $2000.

Past winners include pianist and 2007 Grammy award nominee Barney McAll (1990 winner) who joins the festival from the US, saxophonist and improviser Elliott Dalgeish (1995 winner), guitarist James Muller (2000 winner) and Thirsty Merc bassist Phil Stack (2008 winner) who have all been invited to perform at the festival this year.

DISCOUNTED EARLY BIRD TICKETS AVAILABLE ONLY UNTIL END OF SEPTEMBER. Check website to save!

Wangaratta Festival of Jazz & Blues
Dates: Friday October 28 to Monday October 31
Festival Passes: On sale now. Passes allow access to all venues or blues venues only and range from $65 to $220, or from $45 to $170 for earlybird and concession.
Early bird: Purchase before 30 September to save! Full details on the website
Program & bookings: www.wangarattajazz.com
Accommodation: Wangaratta Visitor Information Centre 1800 801 06 / www.visitwangaratta.com.au

ROGER MITCHELL (with help from the festival press release) 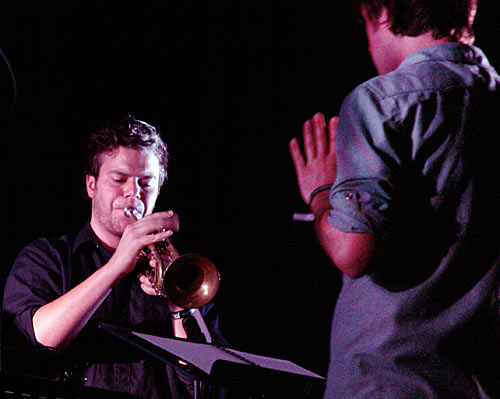 WILD the west may be, but this dectet, under the “baton” of Johannes Luebbers, was all about restraint and finesse. I was reminded of Maria Schneider Orchestra albums, which I love, and Luebbers studied with her and admits she has been an influence. But we were treated to exquisite original compositions — The Exquisite Corpse of Beethoven, Til Death Does Me Part, Eternity, Everything for Brod, Just Ripe and Rumour Has It — from Luebbers’ two albums Make Some Noise and The Exquisite Corpse of Beethoven.

This was a highlight of the festival and it had only just begun. We heard intricately crafted layers of exquisite timbres, with the varied instruments never seeming to be overwhelmed and each having a chance to feature. Luebbers was attentive to his dectet, at times indicating restraint was in order from the richly expressive trumpet of G’Froerer. Steph Nicholls was another standout on oboe, but this was not about individual virtuosity. There was delicate interplay as the dectet explored varied, detailed landscapes.

Some passages were sombre, others showed energy and fun. Highlights included a horn solo in Til Death Does Me Part, with flute floating at the edges, and the soulful oboe in Eternity. In Everything for Brod the piano chords were appropriately muted and flattened, which seemed to ground the rich harmonies in the piece. G’Froerer’s horn solo in Just Ripe was capable of melting the hardest of hearts. Rumbling and rasping from piano, horns and drums in Rumour Has It preceded a soaring oboe before a slow, stately interlude that evolved into cinematic drama. In all, there was a sense of development.