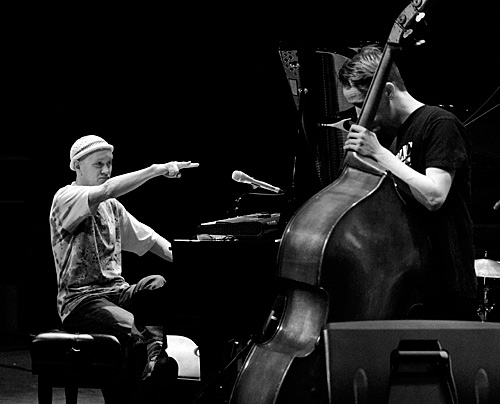 It was going to be an evening of new experiences — I was familiar with only two of the four ensembles and had heard only one musical performance in the Merlyn Theatre at The Malthouse. It is a similar format to Chapel Off Chapel, but much wider, so that it is a much longer walk to move from one side of the elevated seating to the other to gain a different perspective for photographs. The sound seemed excellent, but the lighting lacked direction, so that by the final concert it was almost lights out as far as the action on stage was concerned.

I don’t believe that the music of Charlie Parker can be easy to play, and the opening concert confirmed this. Django Bates, at the piano and keyboard, was joined by Peter Eldh on double bass and Peter Bruun on drum kit, with Bates taking a conducting role either from the piano with gestures or by walking over to the Monash Art Ensemble, which included students and seasoned players.

If anything this outing was a demonstration to me that, first, I did not know Parker’s music well enough to make any assessment of how Bates had departed from the original Parker arrangements, and, second, it was complex music that called for skill and attention to detail by the musicians.

I particularly enjoyed Bates’ We Are Not Lost We Are Simply Finding Our Way (that’s how I felt), which featured Scott Tinkler on trumpet. I loved the interplay between bass and piano, as well as some deep, growling notes and mingling of sounds from the ensemble in Star Eyes. The orchestra seemed to have excellent control of dynamics in Confirmation, flaring up suddenly in what became a hard-driving piece. The Study of Touch was full of interest, with ensemble solos from Tony Hicks on flute, Rob Burke on soprano sax and a young sax player who may have struggled a little at higher registers. My Little Suede Shoes showcased some deft work by the trio before Bates conducted the ensemble in.

Audience reaction is often a useful guide, not necessarily to the musicianship, but to how well the music succeeds in being engaging. In this concert I felt as if the appreciation was muted, with the ABC’s Gerry Koster having to suggest that with extra clapping “we may get an encore”.

But I was inspired to seek out more of Bates’ work and to get to know Parker much better. 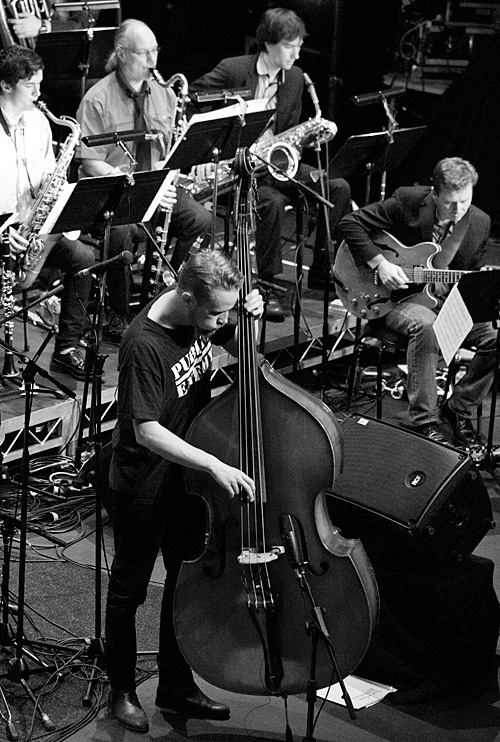 This was the trio with which I was acquainted, but the outing was another clear demonstration that hearing a group live will always have far more impact than hearing them on an album.

As soon as the early distraction of taking some photographs in the allocated time and the parsimonious and nasty red light was over, I was immediately engrossed in this set, which was music I felt could be touched or felt as a physical sensation. Propulsion is often a key factor for me, and Spence‘s trio — Lloyd Swanton on bass and Toby Hall on drums and percussion — had it in spades. Brave Ghost featured some lovely, deep, resonant bass and delivered intensity plus. With excellent dynamics from Hall and some hot piano by Spence, this was going places. The piece was a ripper.

We heard Seventh Song, Threading the Maze and “a quick version” of Sleeping Under Water, each demonstrating this group’s ability to gain and hold our attention, building and releasing tension as changes occurred. This was a riveting set by a focused, energetic and engrossing trio. And I believe they enjoyed it as much as we did. 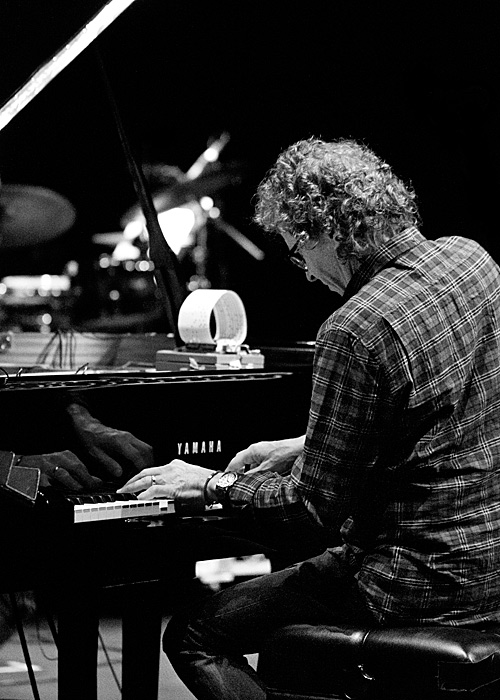 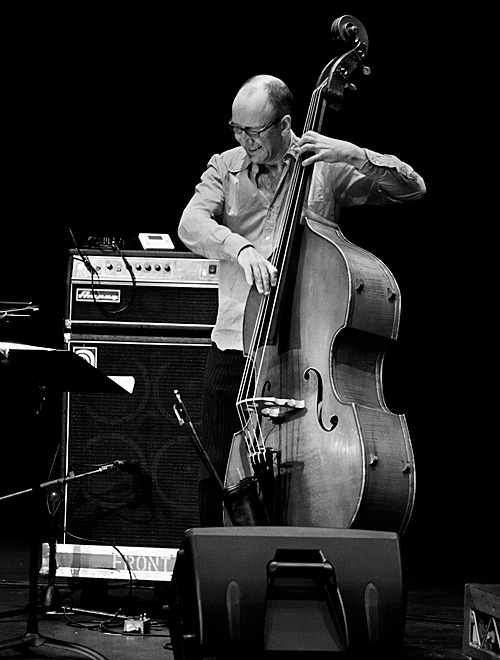 Sometimes we need spoiler alerts. I often think that if I read a film review before seeing it, it is impossible to wipe out the memory of a single remark that may skew how I will view the movie. In the case of this outing by Dawn of Midi, I happened to read a brief comment by someone who had been at the previous night’s performance. In summary, this person thought Dawn of Midi’s set was similar to a performance by The Necks, but less interesting.

I could not erase that idea as I listened to Amino Belyamani on piano, Askaash Israni on double bass and Qasim Naqri on percussion. The set seemed very controlled and to be all about incremental change. A lot of alterations were made to the rhythmic patterns, but the changes were gradual and required concentration to pick up.

In a strange twist, a conversation after the performance altered my view. Curious about what those familiar with Dawn of Midi had thought, I asked some fans of the group. The explained that this was not improvised at all, as is The Necks’ music, but totally scripted — and in detail, down to the last note, so to speak. They assured me that the set as played live was very close to the album Dysnomia and that I should get it and listen before passing judgement.

So I dutifully obtained the album and have played it a few times while writing these “review-style” pieces. I find that my view has changed. Whereas on the night I did not think there was enough to keep me interested and hanging out for more, I can appreciate now that there is a compelling element to this incrementally changing landscape. 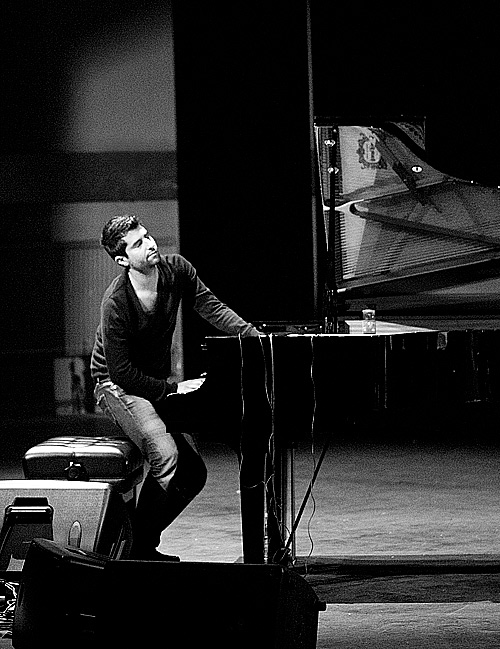 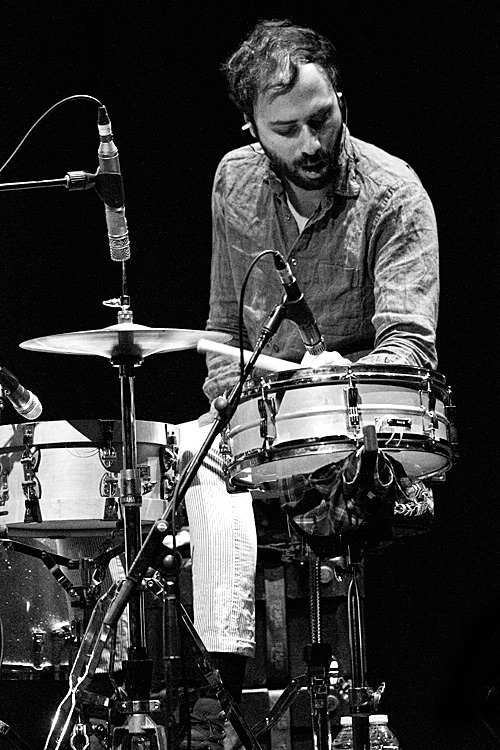 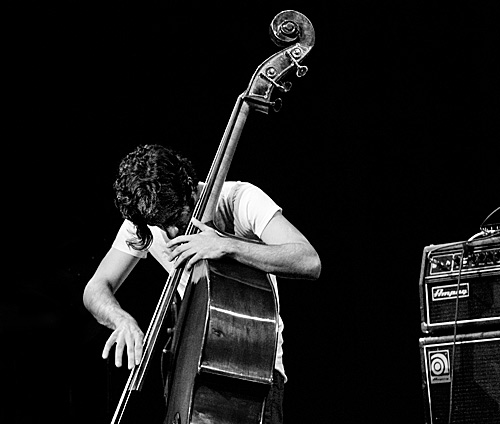