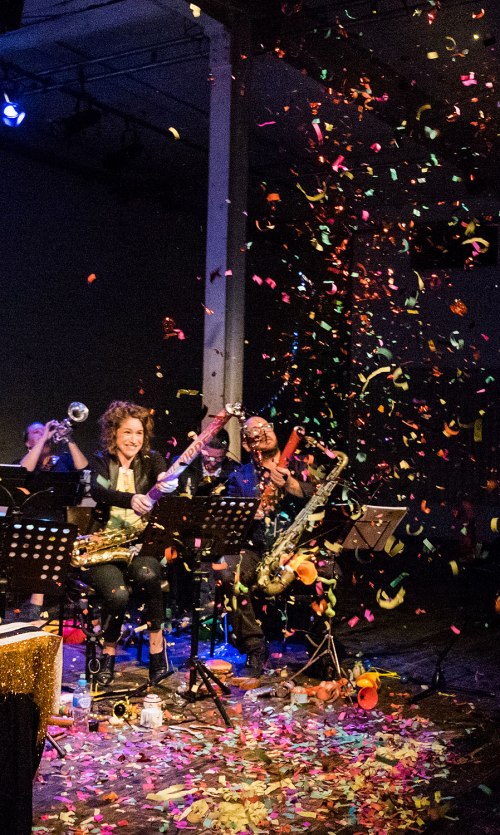 By the time this post appears the second performance of this concerto will be over, but there will be two more chances to join the audience — on Saturday at 7.30pm and on Sunday at 3pm.

I loved this work. One of the performers, alto saxophonist Cara Taber, described this as “beautiful, thought-provoking, and strong original music by Adam Simmons” and that fits.

The concerto, which has three parts surrounded by a prologue, two interludes and an epilogue, is at times frenzied and at others meditative. Bursts of sudden energy come from the powerful piano of classical musician Michael Kieran Harvey as well as from the Toy Band.

As is always the case with Simmons’ art, we are encouraged to enjoy as well as to reflect on what we are seeing and hearing, what the performers are bringing to us beyond their facility with a range of instruments.

Confucius, a great lover of music, is part of this work, introduced in lines spoken by Simmons as he turns the handles on music boxes, propelling paper tapes into which the words are punched as holes. My googling suggests that Confucius gave ideas on how music should follow the ideal of the ancient pattern and then allow for improvisation while maintaining harmony.

This is the context for the brief spoken passages in Simmons’ concerto, in that Confucius, when talking to the Grand Master of Lu (who had been given the task of teaching music) about the Ancients’ Music, said, “Their music began with a strict unison. Soon the musicians were given more liberty; but the tone remained harmonious, brilliant, consistent, right on ’til the close.”

The spoken passages provide a framework in which the musicians work. The whole work — Simmons’ first long-form composition — is part of his exploration this year of The Usefulness of Art, inspired by French Impressionist sculptor Auguste Rodin‘s view that “I call useful anything that gives us happiness”. Simmons wants us to reflect on art as connection, sharing experience and encouraging understanding between people.

The influences he cites for this effort to highlight the contrast between soloist and ensemble include the words of Confucius, Werner Herzog films he watched when composing the piece in Wye River some years back and John Zorn’s books of interviews, essays and commentaries by musicians.

All this, while interesting as a background to the performance, is not required as a prelude to its enjoyment. There are startling moments in the concerto, there are periods in which Harvey thrills at the piano and there is a time when Taber’s saxophone solo is accompanied by musicians moving quietly and percussively through the audience and performance space.

It is best not to tell that story beforehand, but to experience it. I would thoroughly recommend that you find the time to catch the remaining two performances of Concerto for Piano and Toy Band.

Below are some images, which are in black and white. The performance certainly is not. 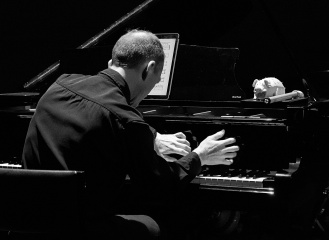 Adam Simmons with one of his toys. 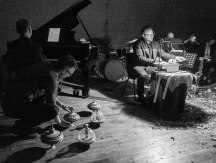 Gideon Brazil at the music box, Hugh Harvey at the tops. 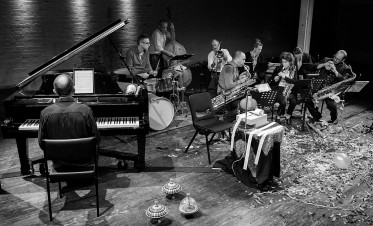 The opening night is over. Yay! 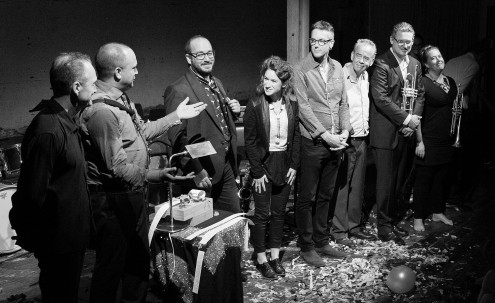