FROM NOW OM, LET US CHILL 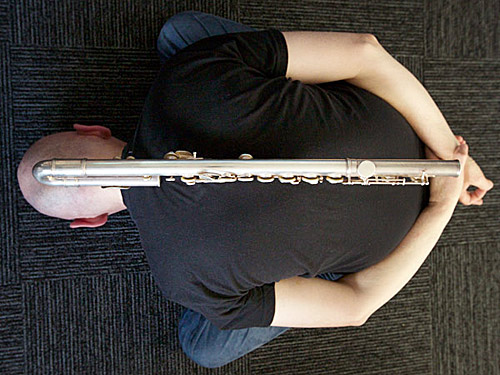 Of all people, I would probably benefit most from this example by Leo Dale‘s diverse and continuing creativity. After a year in which I have spent most of my waking hours in front of a computer screen, working to deadlines or moving gradually forward on a long-term project that is now close to completion, I would benefit from being able to chill and to lose stress.

From now on, that’s a key aim for me, but at this stage I’m just trying to be aware of the stress and not to judge. That said, I am unfit, overweight and sedentary. And I need music.

Track one of From Now Om is almost five minutes long and I’d love to have a whole album of its fusion of saxophone and cello with chanted Om.

The remaining track consists of 40 minutes of  meditative chanting, with six voices singing Om together in a harmonic series that Leo describes as a “human tamboura that invokes deep peace”. Leo sings each Om as six notes of the harmonic series. He says each one of these voices is vibrating in sympathy with the lowest as well as with each other.

In the live performance of this work, Leo will sit on a large rug with a laptop and looping software. A cello loop will play and then one by one he will layers six voices on top of each other, singing Om. For the technically minded, he describes it as “the intervals are the same as the harmonic series, the fundamental note One octave above one octave and a fifth two octaves Two octaves and a third Two octave and a fifth”. That was confusing to me, but I am sure it is not necessary to understand that to appreciate the result.

Leo visits India every year and he had the idea for this album in 2011 while singing overtone harmonies to the sound of priests chanting in the temple in Ganeshpuri. As he explains it, “Every note, every string, every horn, every voice is made from sound vibrations. Each sound is made from one main pitch (the fundamental) and mixed in, some other notes at lower volumes (harmonics). If you think of a skipping rope in the schoolyard, the rope is like a big vibrating string. That big loop is the fundamental, the main note you can hear in a guitar string. If you then put some extra energy into the skipping rope, you can get two loops going. Each loop is half the length of the rope and in a vibrating guitar string this harmonic is up one octave. Similarly that string is also vibrating with three loops, four loops etc. These notes exist in lower volumes in all music, speech and sounds in general. This is the harmonic series.”

This entry was posted in ARTICLES and tagged From Now Om, Leo Dale. Bookmark the permalink.

One response to “FROM NOW OM, LET US CHILL”