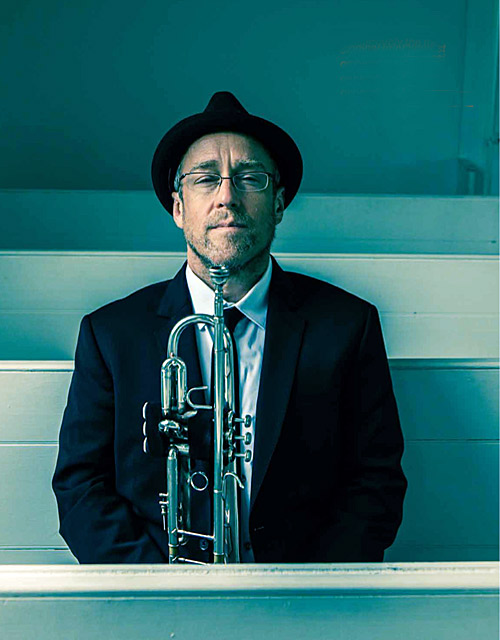 There are two reasons to be excited by the collaboration to aired this evening at Monash University. The first is that renowned trumpeter and music educator Dave Douglas, fresh from his performance with John Zorn at the Adelaide Festival, will unveil a new and as yet untitled composition to a Melbourne audience.

The second is that the new work will be played by the exciting, inventive and talented Monash Art Ensemble under the direction of Professor Paul Grabowsky, who is Executive Director, Performing Arts, Academy of Performing Arts. This group, which features the cream of students and staff from the Sir Zelman Cowen School of Music and veteran players of the Australian Art Orchestra, has collaborated recently in projects with leading figures in contemporary music including Mark Helias, George Lewis and Mary Finsterer. 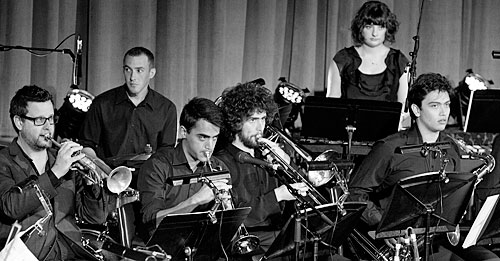 At last year’s Melbourne International Jazz Festival, the Monash Art Ensemble’s concert in The Forum upstairs with bassist Mark Helias was a definite highlight, not only because of Helias’s compositions, but also because the ensemble played difficult material with finesse and power. For the Ausjazz review of this concert, see BAND ON THE RUN.

Monash Art Ensemble on stage at The Forum upstairs

Douglas says his new composition for the Monash Art Ensemble features 16 musicians in ensembles of wind, brass, percussion and strings. It is inspired by the timbres of the composers of the Ars Nova in 14th century France, but moves into “wholly uncharted territory”.

“Improvisation meets composition as these sounds walk across the centuries for a new chapter in this American composer’s oeuvre, written especially for this engagement”, Douglas said.

Paul Grabowsky described the collaboration with Douglas as “a milestone in the already eventful life of the Monash Art Ensemble”.

“He is without doubt one of the deepest thinkers around contemporary jazz and improvised music today, a composer of great depth who is able to embrace a pluralistic vision of music within a strong stylistic framework. He is also one of the leading trumpeters of his generation, and a major educator, so there is much to be excited about,” Professor Grabowsky said.

Dave Douglas has been awarded a Guggenheim Fellowship, an Aaron Copland award and two Grammy nominations. Douglas has a new quintet, an electric sextet (Keystone), and Sound Prints Quintet, which is co-led with saxophonist Joe Lovano.

From 2002 to 2012, he served as artistic director of the Workshop in Jazz and Creative Music at The Banff Centre in Canada. He is a co-founder and director of the Festival of New Trumpet Music, which celebrated its 10th anniversary in 2012. In 2013 Douglas was, for the second year, International Jazz Artist in Residence at the Royal Academy of Music in London and launched his own Jazz Workshop, dedicated to enriching the musical experiences of younger players.

Here’s a clip of the Dave Douglas Quintet at work in July 2013 .