NEW DIRECTION FOR WAY OUT WEST

End of intermission: The new Way Out West ensemble.

The debut performance by Peter Knight’s Way Out West in its latest incarnation was an occasion for mixed emotions. The tunes were familiar and it was great to hear this inventive ensemble again after a long intermission. But those of us who recall earlier performances featuring the distinctive contributions of Anh Nguyen Dung on traditional Vietnamese instruments — dan tranh, dan bau, dan nguyet — and modified electric guitar were bound to feel nostalgic for the past.

At the beginning of the second set, when the band played a piece (was it If I Knew Where You Were?) written for the dan bau (Vietnamese zither), Lucas Michailidis on bottleneck guitar gave an excellent interpretation of that instrument. It did not quite capture the delicate shimmer that was so entrancing in the original version, yet it was a sign that a band moving on would pay homage to its heritage.

Bands, however, are a moveable feast and there can be no standing still or pondering of past glories. Way Out West has made significant changes to a line-up that has included drummers such as Tony Floyd, Ronny Ferella, Scott Lambie, Dave Beck and, most recently, Raj Jayaweera. With Raj in New York and Dung unavailable, Way Out West has welcomed Michailidis, Hugh Harvey at the drum kit and koto virtuoso from Sydney, Satsuki Odamura.

Having had little time together, the new ensemble has yet to discover the directions it will take as it forges a different identity while retaining its characteristic integration of Asian instrumentation and approaches with West African grooves and jazz-inflected melodies. But during Sunday’s performance there were signs that valuable interactions will develop.

Howard Cairns on acoustic bass gave every indication that he relished the contributions of Odamura on bass koto. Michailidis offers a new dimension, playing chords that were not part of Dung Nguyen’s guitar work. Time will tell how the rhythmically dextrous Ray Pereira will respond to Harvey on drums and Odamura’s koto. 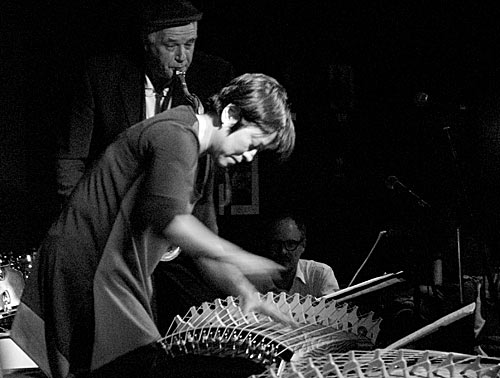 But as the band’s final piece for the night, Blues for a Yungster, filled the venue with the infectious energy of Paul Williamson‘s tenor saxophone in fiery exchanges with Odamura’s feisty koto, there was a clear sign that Way Out West will venture into exciting territory as it prepares material for a new album later this year or early next.

Those of us who have followed this ensemble of talented musicians over the years will still play its early albums to relish its past. Yet we will look forward to significant developments as Way Out West plots a new course and, possibly, turns up the heat.