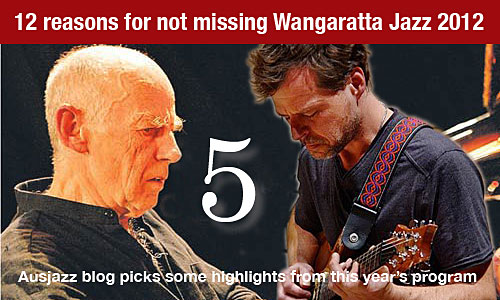 5. ANYTHING COULD HAPPEN WHEN NOCK MEETS MAGNUSSON

The duo encounter between pianist Mike Nock and guitarist Stephen Magnusson is  Ausjazz blog’s fifth highlight of the Wangaratta Jazz and Blues Festival in 2012, and definitely a reason not to miss the festival.

Nock is one of the most experienced and accomplished musicians on the Australian jazz scene. Originally from New Zealand, he spent time in Australia in the early 1960s, then spent two decades in the USA, before returning to Australia to teach and continue performing.

The beauty of Nock’s appearances at Wangaratta is that, though he is always there, he is never predictable — except in the sense that he will always take you somewhere refreshingly inventive and spectacular.

In 2011, on Saturday in the WPAC Theatre, bassist Barre Phillips reunited with Nock, with whom he had played years ago in New York. To me, this captured the essence of jazz’s essential appeal: the excitement of what might happen next, always present in any improvisation, but more purely expressed in these totally unscripted encounters. It was a symphony, if at times an agitated one, with the players prompting the audience to wonder “What will each intervention produce?” and “Will it completely change the mood?”

This year will see the first-time duo encounter between Nock and guitarist Stephen Magnusson.

Magnusson is acclaimed as a distinctive and imaginative guitarist who has worked extensively as a sideman, and in various bands as leader or co-leader. He has performed with Nock as a member of the ensemble heard on the Meeting of the Waters album and more recently in a trio that included saxophonist Julien Wilson.

I often recall Magnusson’s performance during Tim Berne’s Adobe Probe Melbourne outing at Bennetts Lane some years ago during the Melbourne International Jazz Festival. The guitarist recalls that he realised during the gig that one of the festival drawcards, guitarist Bill Frisell, was sitting in the audience watching, so he just decided to go for it. Magnusson’s talent shone out then, and he continues to explore new ground with his group MAGNET.

I am looking forward to this encounter. I expect it to be unscripted and to take us somewhere very special. The joy is that we will not know what to expect and won’t find out until, moment by moment, it happens.