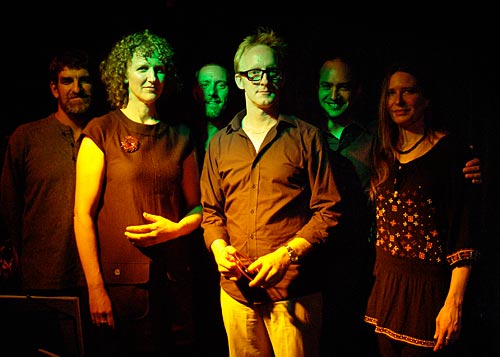 Ausjazz blog’s take on Collider: “This was really visceral music and its effect was felt physically. The combination of instruments provided a timbre-laden treat that would gladden the heart of a Tasmanian conservationist or an Orbost logger, or both.”

Collider’s take on Collider: “A truly eclectic Melbourne ensemble, part jazz group, part string ensemble and part wind band.  Collectively the members of Collider occupy almost all facets of the Melbourne music scene, from the MSO, to the Make It Up Club.”

Valiant Obsession (Jason Bunn): Inspired by a track from the Punch Brothers,
where a seemingly random violin tone was woven into a crackin tune (“Me and
Us”, from “Antifogmatic”, 2010). Each instrument is given a short tone
row, first set over a John Adams-esque driving accompaniment, then expanded
to allow each player to explore the improvisational possibilities of their
tone row, both individually and in combination.

Peteliske  (Anita Hustas): (pronounced peh-teh-lish-keh) means butterfly in
the Lithuanian language. This piece is inspired by the ancient Lithuanian
song form ‘Sutartine’ which is a polyphonic mantra like vocal chant.

Both Peteliske and Cloud Shaped Thought are performed from graphic scores
created especially for Collider.

Shrouded History (Ronny Ferella): A three-part work inspired by the drumming and singing of the Santeria religion (a religion found in Cuba that combines West African religious traditions with Catholicism)