PICKING UP ON THE VIBE

There’s nothing like a fast uphill walk from the Forum to Bennetts Lane to get the pulse racing, but it does not necessarily encourage the right vibe for a concert featuring vibes. To make matters worse, I had to have sustenance, but instead chose fast “food” (no names, no pack drill). So I missed almost all of the quartet’s first gig, which was to start at 8pm. 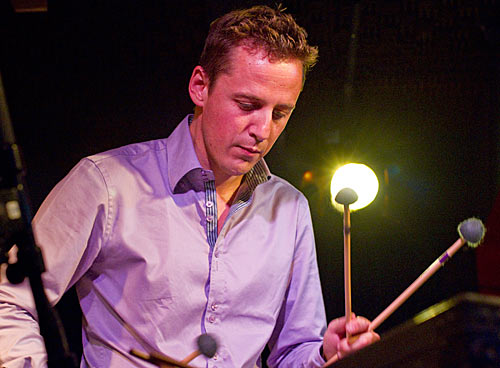 To continue the theme of focus (as in, which members of a band attract attention at a particular gig) from the previous post, it was evident that Pascal Schumacher is the focal point of this band. That’s understandable. He is certainly skilled and his magnificent vibraphone dominates the stage.

The other band member to impress on the night was Franz von Chossy, especially in his composition Metamorphosis (which Schumacher said had been named Life line at one stage). 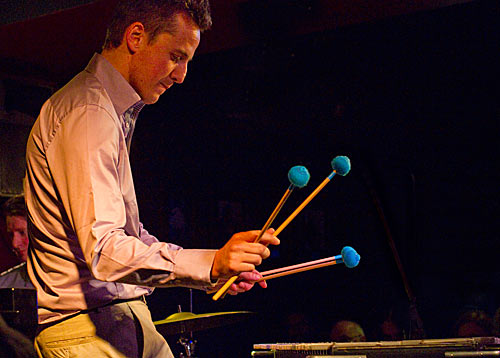 In this set the quartet played some pieces from their albums Here We Gong and Bang My Can, starting with White Surface, followed by the classically influenced Seven Fountains, the moving Metamorphosis, the frenetic 30 Little Jelly Beans, Devisscher’s A Fisherman’s Tale — in which Schumacher effectively employed two bows with the vibraphone — and an interpretation of the Scottish band Travis’s song Sing. 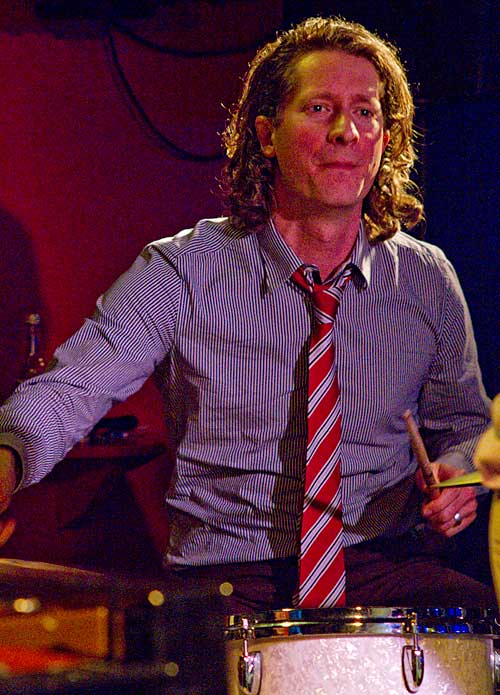 Not too exciting on the night: Jens Duppe

I’d like to listen to more from this quartet, because I think some of the tracks on Bang My Can are darker, with more tension. And that’s the key to what often influences my response to music. When Anat Cohen played swinging clarinet at the Forum upstairs in the Aaron Goldberg/3 Cohens gig, I loved it. Extremes in music, including contrast and tension, along with dark moods and sometimes intense complexity, are elements that predispose me to like a performance or a composition. But I do associate the vibes with a free-flowing, but very light brand of music that often does not do much for me. In the case of this quartet, the darker they get and the more tension there is, the more I’ll like what they do.

On the night, in one set, I was not too excited by either Christophe Devisscher on bass or Jens Duppe on drums. But one set is hardly enough, so my task now is to listen some more.

One response to “PICKING UP ON THE VIBE”