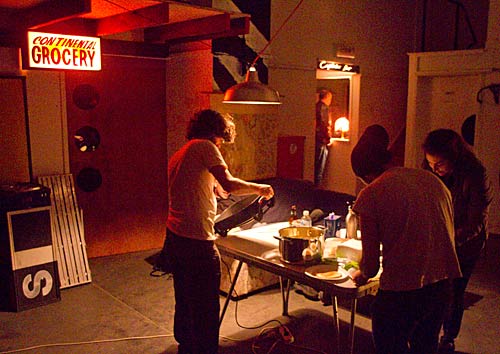 The beginning of a MJFF warehouse party is always like an adventure. Imagine the scene: it’s dark and you are driving down an unfamiliar narrow street somewhere in Brunswick, far enough from the main thoroughfare to seem isolated. It’s quiet. There are no signs of life. On each side of the even narrower street you turn into are the rectangular shapes of what appear to be deserted warehouses. What are all these cars doing here? Where are the people? Then you notice a dimly lit doorway and a makeshift sign with the familiar logo that looks as if a splotch of plaster of paris fell on the lines of a musical staff and started to bleed from a spray can of graffiti. You are about to enter a warehouse party on the fringe.

On the door, MJFF administrator Sonja Horbelt is apologetically telling patrons there is a cover charge — all of $10. Inside is an amazing space, with a lurid continental grocery sign towards the back and on the right a doorway invitingly signposted “Captain’s Bar”. Nearby Myles Mumford is making his “lurve” pancakes on an electric frypan. Light is scarce, but some of it comes from a light bulb buried beneath a bucket of unlit light globes. On a sheet hanging from the ceiling is screening Sun Ra classic Space Is the Place. Well, this space is the place, I reckon. 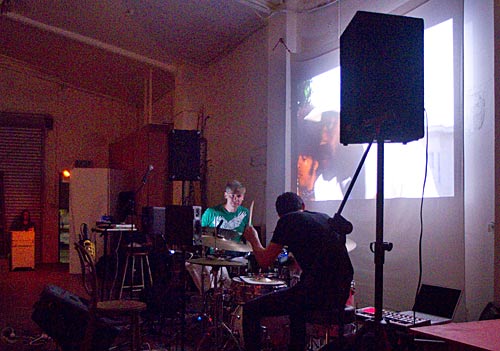 Ronny Ferella has double booked, so the usual duo that has released an album Real Time is reworked, with Fisher stepping into the breach. There’s irony in that because Ferella has so adeptly filled in for other drummers so many times. Fisher has performed with Price on many occasions during VCA years, so there’s no problem.

I don’t listen to a lot of this style of music, but I am surprised at how quickly it can draw me in to a soundscape that is always moving ahead and has cohesion to go with its variability. Fisher is doing things with an oscillator of sorts that I really find satisfying the visceral way that a bass or cello can appeal.

The emphasis is on rhythm and there’s no melody to speak of, but there are harmonies of sorts and a feast of textures. I am a little disappointed not to catch Ferella playing the ngoni (a West African string instrument), but there will be another time. Price and Fisher draw enthusiastic applause for their work. 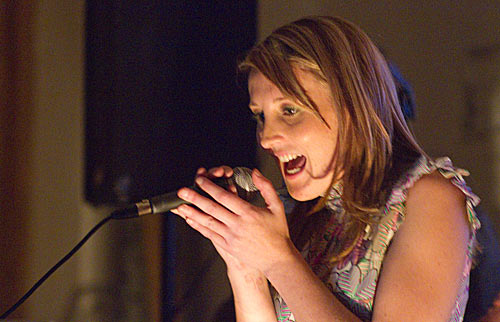 I do not know what to expect from osh10. The program says “electronica, trip-hop, jazz, funk and pop” and that it would be the launch of a single Black Widow. What eventuates is probably not my usual cup of tea, but appealing in lots of ways. Chapman is a capable and engaging vocalist. The trio played Of Hearts Lost, Amnesia, I Choose Silence, Shrapnel, Lullaby, Black Widow, Footsteps and Thief, all of which I assume are originals.

I particularly like Parker’s brief solo in Lullaby. osh10 is a big change from the earlier Peon, yet Chapman integrates laptop and keys into her performance without fuss and to good effect. It’s all good, as our son Isaac would say.

The warehouse party traditionally ends (for this and last year) with an iPhone mashup, in which patrons bring their iPhones to the central podium, plug them in and proceed to create sounds (or music?) with their preferred apps. This year is much better organised, but lacks that feeling of adventure of the previous outing, when people were struggling to connect and ended up on the floor in clumps in the eerie glow of iPhone screens. As one who who would love an iPhone, I look on with some envy. The mashup is interesting, but I wonder whether it would be better to do it earlier in the night. It would seem to be better if there were lots more involved — a massive mashup — and if there were lots of audience members to cheer on the participants. Still, what would a MJFF warehouse party be without an iPhone mashup? It’s about as unthinkable as not having those pancakes. Why are they called “lurve” pancakes? I have no idea. Perhaps someone can enlighten me.

This entry was posted in MELBOURNE JAZZ FRINGE FESTIVAL 2011. Bookmark the permalink.