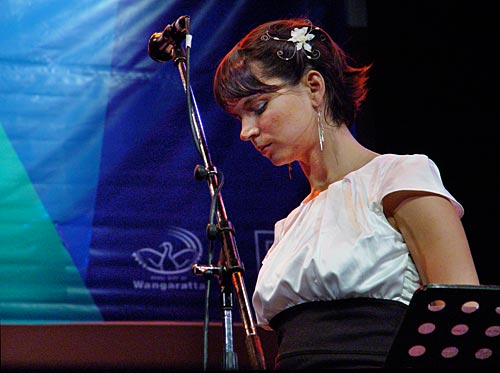 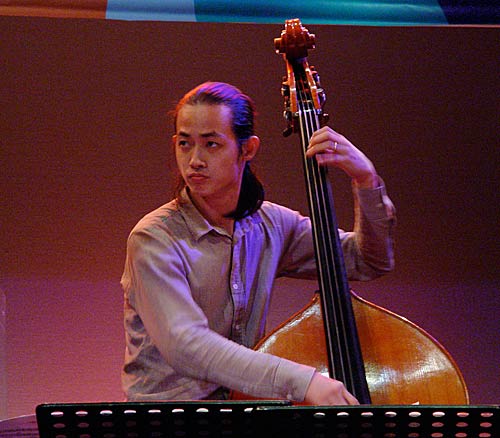 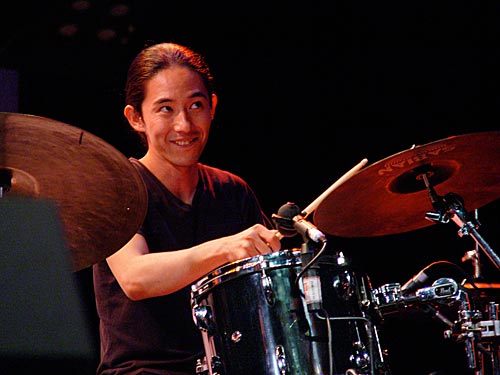 Tension: Jef Neve at the piano.

This was the only set I heard by this trio with Belgians Neve and Verbruggen and Dutchman Samama, who now resides in New York. They played pieces from their new album, Imaginary Road.

From the opener, The Space We Need, a level of barely contained energy was apparent, ready to burst out. Tension is so vital in music if it is to grip the listener, and this taut trio had plenty, building more forward motion than Julia Gillard in campaign mode — much more.

Samama took quite a while to get his levels adjusted to his satisfaction, and that reminds me that at the end of this set (I’m reliably informed by a jazz reviewer) a woman in the audience commented that the bassist had “missed the last section of the final number” because he was “tying up his shoe laces”. In fact, Samama was bending over to adjust the feedback loop pedal at his feet. Good tale, that. 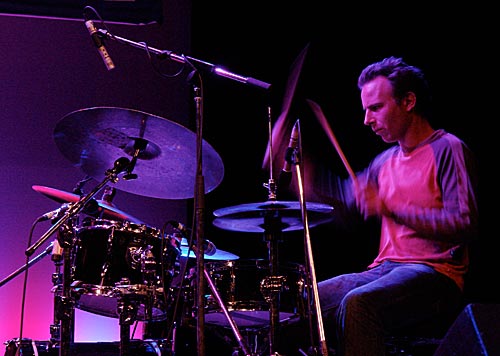 Bowed bass started Sofia, a ballad written in the Bulgarian capital. Verbruggen used a small megaphone with an inbuilt recorder, allowing him to take and replay samples. He also used his hands as this piece unfolded. Neve seemed to be conveying ease. The piece was like an exegesis — the unfolding of an idea.

I’m as open to suggestion as the next person, so in Colours and Shades I immediately thought of pale pastel piano, with Neve delivering lyricism like a breeze just stirring the grass on a sunny day. But Verbruggen scattered some rocks about to keep things grounded, lest it all become too picturesque. Neve’s playing was intent and driven, yet so tender. In flurries of drums there was excitement and contrast. This was already a festival highlight.

Samama’s She Came From the East, written for his wife, celebrated cellist Amber Docters van Leeuwen, brought busy as well as warm, harmonic bass. It seemed imbued with spirit, with love — or was that the power of suggestion? There probably is a good case for not having meaningful titles to compositions.

Verbruggen made good use of a soft drink can, crinkling it softly beside the mic, then adding percussion with a shaker. The piano entered subtly before some angular drum work and some more sampling from the megaphone.

Each piece by this trio was a rich experience, full of interest and possibly tightly controlled. Before the trio played For the People, Neve explained that it had originally been called For Reuben, because it was a difficult composition chosen deliberately to test the bass player, who had joined the trio only the previous year. Tiny runs of tinkling piano were punctuated by drums before the piece gathered momentum. There was a sense of fun and of humour. Samama delivered a great solo over the drums, getting right into it and crying out in his enthusiasm. This was intricate stuff, exploring patterns and going great guns.

In music notation D.C. stands for da capo or “from the beginning”.  Neve explained that in Endless DC he was inspired by the circularity of life and the need sometimes to find an exit from social situations. His piano was lyrical, shimmering and shining, open, warm and airy. Again the summer’s day came to mind. There was warmth in Samama’s solo. Verbruggen added the tiny scrape of a stick end on cymbal. Dynamics and tempo were all important in this, as again the momentum built to a layered finale of complex patterns. As mentioned, Samama added some pedal feedback. A single piano note finished the piece and the set.

I regret only that the trio did not play Atlas from the same album. I would go out of my way to hear the Jef Neve Trio again if I had the chance. This is a trio full of interest.

THIS was an opportunity missed. ARIA award-winning saxophonist Ian Chaplin, who does not appear at gigs that often these days, played with Rex and Barker. It promised to be a fiery, full-on outing, but I had decided this was a time to grab some lunch. So I popped my head in and then left. The hall was packed. Anyone who was at the concert is welcome to provide some feedback.