Our perpetually smiling (currently caretaker) Prime Minister Malcolm Turnbull has exhorted us to help make this country “agile”, by which I have taken him to mean that we must be readily adaptable to all sorts of changes … such as “no cuts” meaning lots of cuts, or copper wire NBN rather than fibre, or jobs’n’growth being without penalty rates or superannuation.

But you may never heard more agile saxophone than Tim Wilson‘s on the new album, Consider This, that he and Andrea Keller will launch tonight at Uptown, presented by the Melbourne Jazz Co-op. And you may never have a more satisfying union (that’s to upset Malcolm) than this unity of piano with reeds.

Recorded live at Bennetts Lane in 2015, it features seven original compositions, captured in all their raw beauty. Here’s some video footage from the night of the recording.

Consider This is available through Bandcamp.

Bassist Chris Hale will join the duo for the second set.

Keller and Wilson say their project was “conceived in 2007 out of a mutual respect and love for open, interactive music making, and a desire to create and explore original compositions and improvisations in an intimate duo format”. 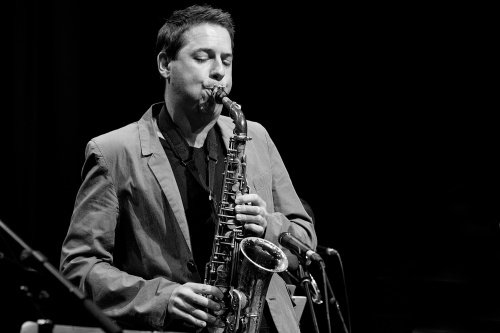 These musicians met when they were studying at Victorian College of the Arts and have been performing together for over 20 years in ensembles such as the Paul Williamson Sextet and the Bennetts Lane Big Band.

Only a limited number of albums will be pressed because the musicians are  focusing on releasing the recording digitally.

CHANTAL FIRES A CANNONBALL INTO A TOUGH CROWD

Vocalist, DJ and PBS broadcaster Chelsea Wilson introduced this two-set gig with lively enthusiasm, and there was every reason to look forward to what was in store from the brothers Rex. Alto saxophonist David, described by expatriate New York pianist composer Barney McAll as “the finest alto saxophonist in Australia today” was joining his sibling, acoustic bass powerhouse Philip. David Allardice was at the piano and Sam Bates was sitting in on drums in the absence of Danny Farrugia. 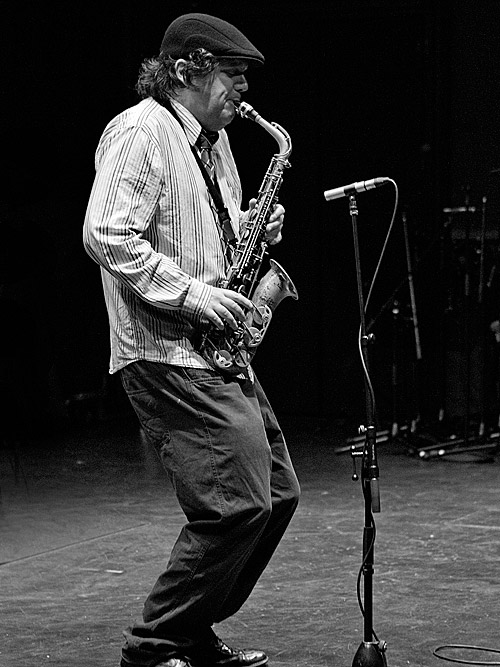 The quartet played eight pieces, opening with John Coltrane’s Straight Street and closing with the catchy, upbeat Mr Hyde, in which we heard Allardice thoroughly warmed up on the keyboard, an absolute ripper of a bass solo and a strong alto solo to finish.

There was a lot to like in the set — the highlights for me were Philip Rex‘s solos — but either the audience was unresponsive or some interplay was missing between the players, because the vibe did not seem to be there on the night. We heard some super smooth, dreamy sax in David Rex‘s ballad Shades of Colour and some slightly bent alto notes in the classic Body and Soul (“a quick ballad to show how slow we can play”), plus tougher and faster bop in Slap It. But Hammond Song seemed to lack a real buzz and in general the quartet seemed to be finding it hard to fire up the small crowd. 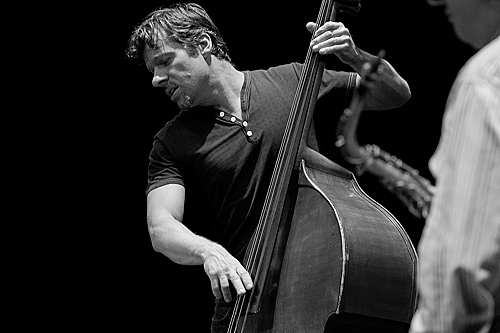 I felt that a pianist such as John McAll may have added the pizzazz and flamboyance to arouse the audience on the night. Yet there was no denying the individual talents of the Rex boys on alto sax and double bass.

Tom Lee on bass and David Wilson on alto sax

To be honest, I was hoping to hear this band play pieces such as One for Daddy-O; Sack O’ Woe; Mercy, Mercy, Mercy; Limehouse Blues or Walk Tall, but I had to be content with Work Song among my Adderley favourites.

That said, we were treated to a great trip down memory lane, beginning with the bright opening track The Chant, featuring top solos by Wilson and Williamson. We were not long without vocals and as soon as Mitvalsky came on for Ten Years of Tears — which included great bass work by Lee — the songstress became the focal point of the band. I think it was a tough audience, but Mitvalsky gradually roused them and won them over with the power of her personality and vocal range.

A restrained Williamson solo in If You Never Fall in Love With Me was a treat, as was Wilson’s alto in the bluesey Since I Fell For You, in which Mitvalsky’s vocals were expressive and powerful. In Work Song her forceful vocals carried conviction.The trumpet was another highlight in this piece.

Cannonball delivered the goods and no doubt reminded some in the audience of the Nancy Wilson and Cannonball Adderley association. As a lover of the instrumental Adderley, I had to quell a wish to hear more of the band unadorned, but that’s a personal preference. I reckon Mitvalsky’s presence made the night for many at Chapel Off Chapel.

WELL MAY CHARLES MINGUS SAY AMEN TO THAT 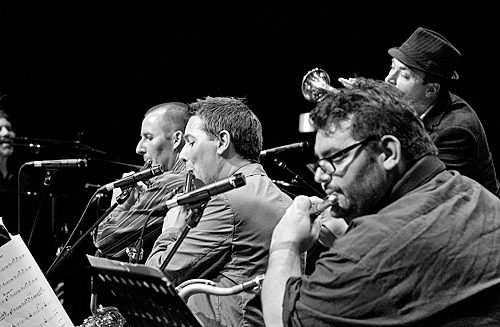 Trumpeter Ray Cassar mimes flute behind the flute-players Steve Fitzmaurice, Tim Wilson and Carlo Barbaro in Mingus Amongst Us

REVIEW: Mingus Amongst Us, Chapel Off Chapel, Monday 19 May, 8pm for Stonnington Jazz

Possibly it’s a little flippant to ask this, but how many flautists does it take to unhinge a trumpet player? The answer, it seems, is three. So, in the second — and spectacular — set invoking the spirit of Charles Mingus, three of the nonet’s reeds players put down their saxes and picked up flutes. And in a clear case of flute envy, horn player Ray Cassar turned his instrument horizontal and began miming a flautist behind the other three.

This amusing moment reflected how much fun the nine band members were having as they played Steve Fitzmaurice‘s arrangements of music by great bass player and composer Charles Mingus, which has been described as “earthy, passionate and sophisticated, blues and gospel-inspired jazz”.

The line-up of this ensemble, which performs regularly in Sydney, varies a little according to who’s available in the city where they are playing, but at Chapel Off Chapel we heard Fitzmaurice (baritone sax) with Cassar (trumpet), Jordan Murray (trombone), Nick Mulder (trombone), Carlo Barbaro (tenor sax), Tim Wilson (alto sax), Joe Chindamo (piano), Tom Lee (bass) and Hugh Harvey (drums). 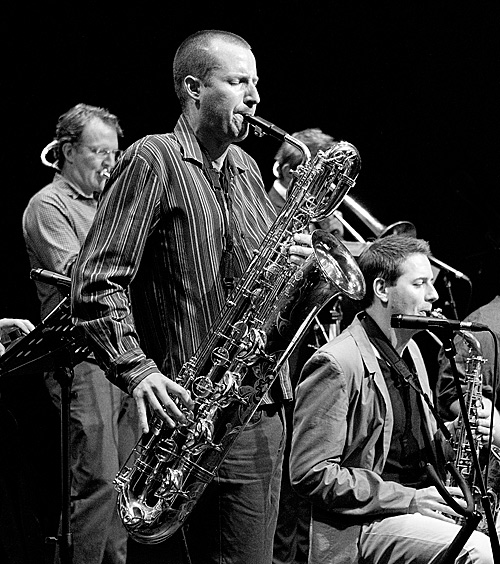 Steve Fitzmaurice solos in Mingus Amongst Us

I freely admit to loving this group’s work and these Mingus arrangements so much that it’s been hard to remain dispassionate (if that’s called for) or to think too deeply about what I like about the Mingus Amongst Us gigs I’ve heard at Bennetts Lane Jazz Club. I find myself just getting into the music and soaking it up as it pours forth from these superb musicians.

Reviewers are supposed to have their critical antennae up, I think, so can I find a quibble? If I have to, it would be that Cassar on trumpet — as opposed to on flugelhorn — was at times so intensely piercing that some notes seemed to upset the balance slightly. But I loved his swinging horn in Fables of Faubus and his flugelhorn work amid the sweeping vistas of Alice’s Wonderland (originally Diane), which was an absolutely splendid piece. My only other regret was that Tom Lee’s solos on bass were too brief. 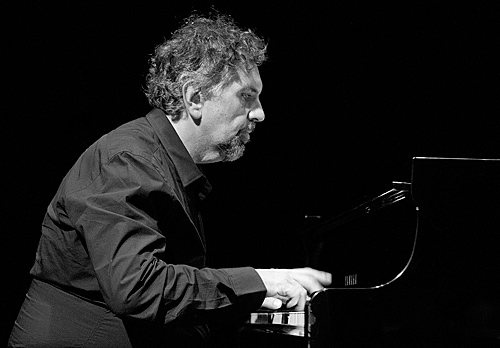 Joe Chindamo solos in Mingus Amongst Us

So what was so appealing and so clearly had the audience — not quite as many as I’d hoped, but it was a Monday night — enthralled? Mingus Amongst Us serves up a rich feast of sound that is full of momentum. From the start of the first set, when Harvey was able to “stick it to us” with a long solo, we heard a band that was tight and punchy, with full-on pieces as well as ballads. We heard sharp splinters of sound and fiery bursts in Jump Monk, tension and crescendoes in Gunslinging Bird (originally If Charlie Parker Were a Gunslinger There’d Be a Whole Lot of Copycats), shimmering horn volleys in Fight Song and enough forward momentum in Tijuana Gift Shop to justify Julia Gillard‘s phrase “going forward” (and don’t we miss Julia).

Carlo Barbaro solos in Mingus Amongst Us

We heard ripper solos from Barbaro in Gunslinging Bird and Goodbye Pork Pie Hat (how deep can a tenor sax go?), from Wilson in Fight Song and the closing Better Get Hit in Your Soul, from Fitzmaurice in Alice’s Wonderland and amid the wonderful chaos of Moanin’, from Mulder in Fight Song, from Chindamo in Tijuana Gift Shop and, along with Murray, in Us is Two, plus many more.

Tim Wilson Solos in Mingus Amongst Us

There is so much energy in Mingus. So much of it is released by this ensemble. And there is wonder and beauty there in ballads such as Self Portrait in Three Colors.

So, great arrangements, great musicians and a great vibe. Ages ago I wrote that after a Mingus Amongst Us concert that I almost expected to hear Charles Mingus say “Amen” at gig’s end. That’s not far off, I reckon.