SO WHO DID RESCUE MELBOURNE’ S JAZZ?

Michael Tortoni on bass at the launch of World’s Best Jazz Club: The Story of Bennetts Lane by David James.        Image: Roger Mitchell

On April 19 I posted the news that musical entrepreneur and property developer Albert Dadon — who owns Bird’s Basement in Melbourne — had acquired the name and assets of Sydney’s jazz club The Basement and planned to reopen it as soon as possible.

This was significant news, especially for Sydney fans of improvised music. That post included material provided in a media release by Dadon, including a paragraph stating that “he rescued the Melbourne International Jazz Festival when the City of Melbourne cut its funding in 2000″.

The release went on to say that under Dadon’s leadership  the festival became “a Major with appropriate funding” and “grew from 5000 visitors in 2001 to more than 200,000 by the time he stepped down in 2009”.

Reactions to the news about The Basement varied, but it probably surprises few that parts of Dadon’s media release have been questioned — these days “fact checked” is the usual term — and that alternative versions of history have been added to the mix.

Michael Tortoni, who is artistic director the Melbourne International Jazz Festival and runs The Jazzlab venue in Brunswick, was concerned that Mr Dadon’s version of events did not tally with his recollection. 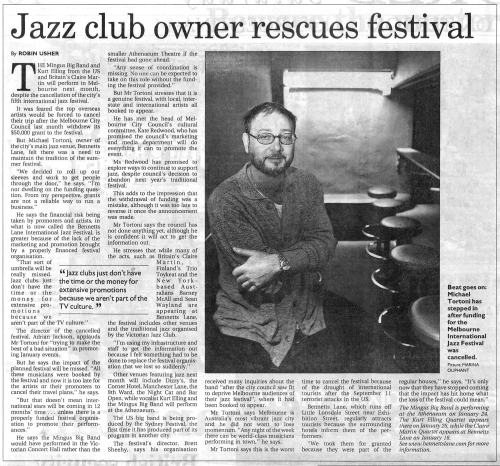 He passed on an article by Robin Usher published in The Age on December 22, 2001 following the cancellation of Melbourne’s fifth international jazz festival due to the withdrawal of a $50,000 grant by Melbourne City Council.

Usher quotes Tortoni, then owner of the city’s main jazz venue, Bennetts Lane, as saying there was a need to maintain the tradition of the then summer festival and that “We decided to roll up our sleeves and work to get people through the door” to what was called the Bennetts Lane International Jazz Festival.

Usher quotes that Adrian Jackson, director of the cancelled festival, as applauding Tortoni for “trying to make the best of a bad situation” in promoting the January events. But Jackson does add that international stars wouldn’t necessarily be coming in a year’s time “unless there is a properly funded festival organisation to promote their performances”.

Tortoni is quoted as saying, “I’m using my infrastructure and staff to get the information out because I felt something had to be done to replace the festival organisation that we lost so suddenly.”

Interestingly, given that my post based on Dadon’s media release was headed “Dadon plans The Basement rescue”, Usher’s article had the headline “Jazz club owner rescues festival”.

The caption on Marina Oliphant‘s image of Tortoni at Bennetts Lane was: “Beat goes on: Michael Tortoni has stepped in after funding for the MIJF was cancelled.”

It is also interesting from a historical perspective that venues included in the Bennetts Lane International Jazz Festival in 2001 were Dizzy’s, the Corner Hotel, Manchester Lane, the 9th Ward, the Night Cat and Bar Open — a wide range indeed.

Owners of rival jazz clubs in Melbourne — albeit very different styles of venues — may well never agree on who rescued what at that difficult time in the history of jazz in Melbourne. But it is good to keep in mind just how tough it has been over the years for those arranging funding, promotion and funding for our jazz festivals.

After Dadon’s announcement about The Basement and his media release, it wasn’t long before a Facebook page emerged entitled Australian Jazz Fact Checker. It isn’t hard to imagine who may have set that up.

For those not on Facebook (Zuckerberg and Cambridge-Analytica eat your heart out) here are some responses to parts of Albert Dadon’s media release:

“He rescued the Melbourne International Jazz Festival when the City of Melbourne cut its funding in 2000.”

Fact Check: False
Albare Dadon wasn’t even part of the festival in 2000, let alone ‘saving it’. An article about it can be found in The Age on December 22, 2001.

Fact Check: Partially True
Albare Dadon did leave the festival, however the circumstances behind why he did so are sealed behind a confidentiality agreement.

“Mr Dadon opened Bird’s Basement, below his Jazz Corner Hotel at 350 William St. in Melbourne’s CBD in March 2016 and committed himself to make it one of the world’s most renowned. Today, the club, a sister venue of Manhattan’s Birdland, regularly features world class musicians and is recognised internationally as Australia’s premier jazz venue.

Fact Check: Maybe?
I’m not sure who recognises it as the premier Australian jazz venue, but I’m sure he could find someone to quote.

“As Albare, he often performed at the Sydney Basement.”

Fact Check:
Depends on your definition of ‘often’
Albare and Urbanity performed at the venue twice in 5 years

“their album Urban Soul, this year enjoyed Billboard chart and critical success in the United States.”

Fact Check: False
I could only find one review by an independent journalist who rated the album 3.5/5 stars. I’m pretty sure that doesn’t count as a critical success.

The identity of the fact checker is not stated, but will readily come to mind, I’m sure. Albert Dadon is welcome to respond to Michael Tortoni’s interpretation of events.

The McAlls: Barney and John   (Image at right supplied)

You don’t often catch the brothers McAll together on stage, but this week they are coming close to that congruence — performing in the same venue only days apart.

The first — and possibly the only time — these polished and passionate performers appeared together was during the Stonnington Jazz festival on May 23, 2012 at Chapel Off Chapel.

The creativity of these siblings is always evident, although Barney’s flamboyance and energy contrasts with the elder McAll’s distinguished and more reserved presence. Both are capable of splendiferous feats on piano.

Grammy nominated Barney McAll has played on over 100 recordings and has released 13 highly acclaimed solo albums. In Thursday’s concert he joins the critically acclaimed Monash Art Ensemble to perform his six-part suite, Zephyrix.

Barney was commissioned by the Monash Art Ensemble to compose this piece during his residency at the Peggy Glanville-Hicks composer house in 2015. “Whilst there, I had flashes of an image … half man, half bird with one large wing on its right side, dressed in business attire,” he explains.

“Following the abstract advice of this image I decided to fuse the Greek God Zephyr with the mythical Phoenix to create a new beast; the Zephyrix. It’s a hybrid creature which, for me, symbolises the bridging of tensions that occur between our mundane struggles and the evils of life, and the liberating creative expression of our true selves.

“Zephyrix is the musical embodiment of that tension, encapsulating both the strain and release of this dichotomy. It seeks to explore the dialectic between struggle and serenity, and illuminate the myriad of unseen colours, tones and potentials that are held within a new and ever-emerging mind (Metanoia).

“The five birds of alchemy and transformation have been invoked to summon the Zephyrix: Black Crow, White Swan, Peacock, Pelican and Phoenix. They are the sign posts that guide us on our journey toward true serenity and real happiness.”

Zephyrix was premiered at Sydney Conservatorium’s Verbrugghen Hall in October 2015.

The ensemble, founded by Paul Grabowsky in 2012, has successfully embraced this concept and offers a pathway for talented students to interact with and build this basis for a strong and uniquely Australian 21st century musician.

The impressive line-up for the MAE performance of Zephyrix is as follows:

I have always associated John McAll with wide-screen cinematic performances, the big stage and large productions, but his work with Black Money is edgy and often darkly humorous. The first Black Money album was recorded in New Jersey in 2007 and released in 2009. Alter Ego followed in 2012, recorded and produced by the ABC’s Mal Stanley. This is a rare opportunity to hear the elder McAll up close.

An inaugural graduate of the VCA’s jazz course, pianist and composer John McAll has been in demand as a musician over two decades. He was musical director and producer of shows At Last The Etta James Story and Here Comes The Night, which sold out Hamer Hall and the Opera House. This Van Morrison homage incorporated the MSO and SSO with McAll’s orchestrations.

Now John is taking a break from producing the latest Black Sorrows album and a busy international touring schedule to release Secular, the third album in a trilogy. Rumour has it there may be special guests along with his Black Money line-up.

John McAll on piano will be joined in this album launch by:

Australian-American jazz vocalist Chris McNulty is giving two back-to-back performances in Melbourne next month before embarking on a world tour.

McNulty premiered her singing with the trio to great acclaim earlier this year at the Mansfield Art gallery now run by Miriam Zolin of extempore fame.

McNulty has often performed at international festivals. Her next tour will take her back to Europe, Russia and America. The American magazine Jazz Times has described her vocalising as “fearless” and her composing as “peerless”’. Britain’s Jazz Wise magazine said she possessed “a voice of serene beauty, striking veracity and compelling emotional fervency”.

She has continued her work as a teacher and is about to launch her groundbreaking book Vocalist As Complete Musician, in which she expounds a method (utilising tetra chords) for singers to expand their knowledge of jazz harmony and provides them with tools for improvising while improving sight reading and composing skills. The book will be launched internationally and available through Amazon, McNulty’s webpage, and digital platforms from August 30.

Information above taken from material provided by Andra Jackson.

“McNulty applies poignant jazz chops to the vocal, while accomplishing the impossible, the expression of her story through song….making listeners rethink the meaning of why we love jazz..”— 5 Stars,  All About Jazz (USA) , July 2015

“Chris McNulty wowed an audience full of rapt jazz lovers at Mansfield Art Gallery who were thrilled by the sounds of world-class jazz delivered by one of the best voices in the business. A well deserved standing ovation finished the night and every heart in the room was filled by the experience.
A highlight for music lovers in Mansfield.”  —   Miriam Zolin, Mansfield Art Gallery, April 2017