Work is necessary to help pay the bills, if for no other, more exalted reason, but sometimes it gets in the way of what we value highly in life. That waffle amounts to my lament that I have to work tomorrow night — Saturday, August 16 — because I will miss a great concert.

But you can go.

One of the definite highlights of this year’s Melbourne International Jazz Festival was the performance in which the Monash Art Ensemble (previously known as Shapeshifter) teamed with US bassist/composer Mark Helias at The Forum upstairs.

The ensemble tackled Helias’s challenging compositions with zest and great competence, delivering a compelling performance that demonstrated how well this collaboration could work.

The ensemble continues to break new ground this weekend by allowing students and staff from the Sir Zelman Cowen School of Music to join veteran players of the Australian Art Orchestra in another exciting musical venture.

Tomorrow night, in its “biggest challenge yet”, the MAE will perform the premiere of an as yet untitled work written especially for the ensemble by a giant of contemporary improvised music, US composer George Lewis, who is on his first visit to Australia.

The ensemble, joined by Lewis on trombone and electronics and guest vocalist Gian Slater, will also play new versions of his recent pieces including Tractatus, Triangle, Fractals and Angry Birds.

Composer, philosopher and writer Professor George Lewis is now on the faculty of Columbia University. He has performed with every major voice in the world of experimental and improvised music during the last 40 years, and has increasingly turned his considerable imagination to composing for various ensembles in the US and Europe.

The concert at Monash University — entitled George and Mary — will also feature a world premiere of Aerea by Mary Finsterer, who is regarded by MAE Musical Director and founding Artistic Director of the Australian Art Orchestra Paul Grabowsky, as one of Australia’s most original musical voices.

Finsterer was commissioned by the Monash Academy of Performing Arts to compose this piece for the MAE. 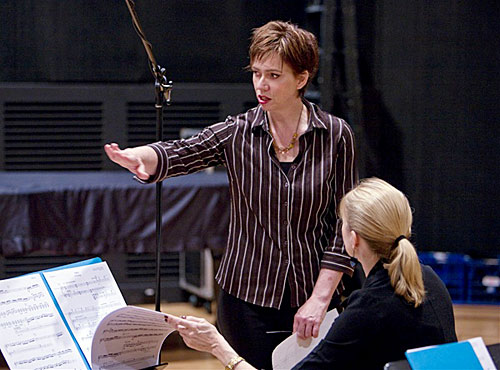 Mary Finsterer’s work has won many awards, including the prestigious Paul Lowin Orchestral Prize in 2009 for her work inspired by Jorge Luis Borges, In Praise Of Darkness. In 2006, Mary received a Churchill Fellowship to compose alongside Marco Beltrami for the blockbuster movie Die Hard 4.

Describing the work, Finsterer says, “Aerea reflects on that slight sense of deja vu you might feel while looking down from an aeroplane window which comes in part from the shifting correspondences between the world below and your own. You start to notice relationships in abstract things that recur, oddly, not only from one shape to another, but also within the same shape.

“Aerea takes this idea of shifting entities as a metaphor to generate dramatic twists and turns of movement and gestural interplay as the music unfolds from one passage to the next. In the music I have composed, figures are repeated and multiplied, and so are motions. As ideas echo from one instrument to another, they are guided by a musical narrative that works to propel them through time and spaces.”

At the concert MAE will also launch a self-titled debut CD, Monash Art Ensemble, at the concert. The album features two never before recorded Paul Grabowsky epics, Variations ‘d’un goût étranger’ on a theme by Marin Marais (2000) and Tall Tales (2010).