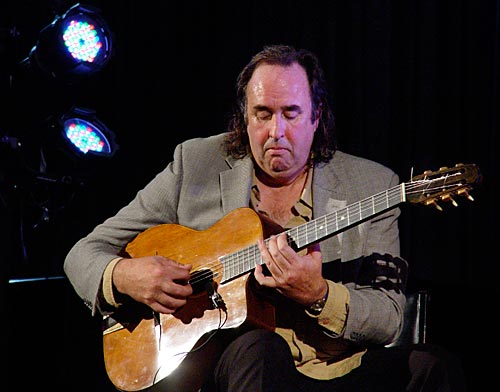 WHAT a quick trip — from Japan to the Hot Club of France in a few easy steps. With a sense of fun and much agility on strings, Date’s quartet ushered us into the world of Django Reinhardt and Stephane Grappelli, into gypsy jazz and hot jazz. Cooper on violin was as nimble as a cat on hot bricks, sweeping and swerving and weaving between the cascade of guitar notes and chords. And behind it all was the energetic Howard Cairns, intent as he delivered impetus. 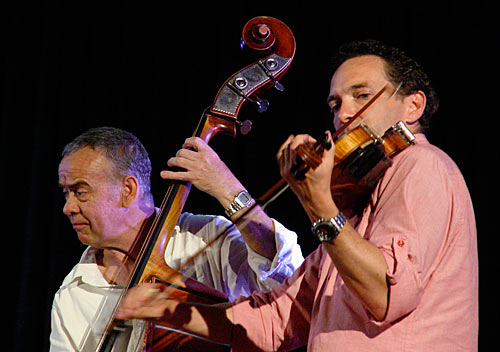 What was it about this music that appealed so much? I thought about that as the quartet played Swing Guitars (Reinhardt), Norwegian Dance (from Grieg’s Peer Gynt), To Each His Own (recorded in 1947 for the film), Sour Georgia Brown (Date), Deep Purple (deRose) segueing into something Cooper wrote “on the plane coming down this morning”, Daphne (Reinhardt), Out of Nowhere as a waltz and Body and Soul, with Cairns playing a melody.

The quartet displayed deftness and lightness of touch. The music was quick, jaunty and toe-tapping. It was intricate, with fingers falling over themselves on guitar and bass strings. The band was tight. The tempo often seemed like skipping. There was whimsy, fun and the music floated lightly over our heads, the ensemble not taking itself too seriously and obviously enjoying the outing. And there was a great deal of skill in the playing.

Stringing us along: Nigel Date and Howard Cairns

It would be great to hear more music from the Reinhardt-Grappelli era and this quartet delivers it in style.

WHEN Mike Nock’s New Quintet opened the 21st annual jazz festival at Wangaratta on Friday, the pianist told the audience, “This is jazz. Things happen.”

It was good advice. The festival program had not seemed to promise as much as in recent years. But things happen.

Patrons did not know a rubber band applied by Melbourne saxophonist Adam Simmons had repaired Oliver Lake’s sax in time for the visiting US quartet to deliver ferocious and virtuosic swing – topping its Friday night outing.

And by midnight Sunday two full houses had been amazed and entranced by the vocal agility and showmanship of Kurt Elling, with his impish humour and homage to jazz greats such as Dexter Gordon.

The inventiveness of Australian musicians was highlighted in pianist composer Stu Hunter’s suites The Muse and The Gathering, with trombonist James Greening’s primal solo a monument to brass.

Mike Nock, whose quintet opened with energy and ended in glorious disarray, was correct. At Wangaratta Jazz, things happen.

An abridged version of this review appeared in Melbourne’s Herald Sun on Tuesday, November 2, 2010
Roger Mitchell will be posting more festival reviews on ausjazz.net soon.