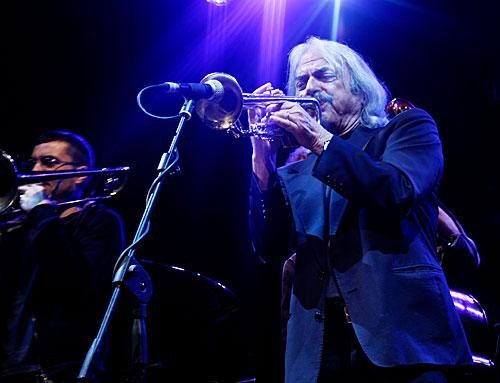 It has become a tradition for Monash University to arrange for its students of improvised music to learn from some of the world’s great jazz musicians, either by having them visit or by taking the students overseass. The results of these working sessions have resulted in significant recordings in The Monash Sessions project — a recording initiative by Associate Professor and Head of School, Robert Burke, and Jazzhead.

Now, before Italy’s trumpet maestro Enrico Rava makes his headline appearance at the Wangaratta Festival of Jazz & Blues, Jazzhead is thrilled to announce the release of the 11-track album The Monash Sessions: Enrico Rava. The album will effectively be launched twice, on Thursday 30 October at Bennetts Lane Jazz Club in Melbourne and on the following evening at Wangaratta. Rava, in Australia for the first time, will be joined by staff and students.

In December last year, 35 jazz students from the Sir Zelman Cowen School of Music travelled to the Monash University Prato Centre in Italy to undertake an intensive three-week performance unit. As part of their study, students were given the opportunity to perform and record with Rava, one of the seminal figures of the European jazz scene.

Rava, an ECM artist, has released over 50 albums during his career, performing alongside greats such as Gil Evans, Cecil Taylor, Joe Henderson, John Abercrombie, Pat Metheny, and Dave Douglas.

The Monash Sessions: Enrico Rava was mixed and mastered at the Sonoria Recording Plant in Prato, Italy, by Andrea Benassai, and produced by Robert Burke and Mirko Guerrini.

Jazzhead describes this album, recorded over two days, as having “a distinct Italian approach”, and being “relaxed but distinctly intense”. “Noted are the beautiful trumpet sound and passionate lyrical lines produced by Rava, conveying potent meaning and harmonic perfection.”