SLIP OUT OF THOSE COMFORT ZONES

An earlier post mentioned some of the gigs that will attract the big crowds at this year’s festival, which artistic director Michael Tortoni has described it as “the broadest, most inclusive ever”.

Before mentioning some concerts that are a little less mainstream, it’s important to highlight the successor to a major hit of last year’s festival, which is sure to again fill Melbourne Town Hall with dancers having the time of their lives. 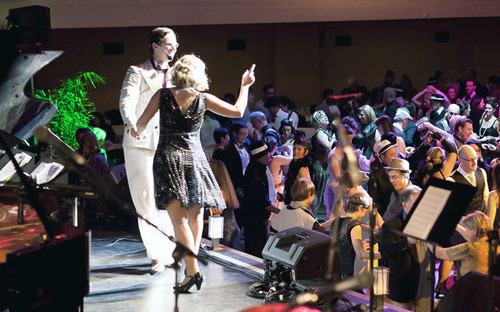 This year, 774’s Swing Noir concert will offer gypsy swing and hot club jazz as Swing Patrol dancers provide the inspiration and help with classic steps of the Charleston, and two bands — Ultrafox and Swingville — delve into the world of Django Reinhardt and the Hot Club of France. The festival invites the energetic to “slip on your dancing shoes, dress to kill and join us at the dawn of European jazz”. And for fans of ABC radio’s 774, the host will be Hilary Harper, who will apparently be “dazzlingly bohemian” on the night.

It’s been said many times before, but festivals are one way to tempt music lovers to dip their toes into unfamiliar waters. Sometimes this means “jazz” becomes less of a perceived obstacle; sometimes devotees of jazz try moving outside their comfort zones.

And speaking of breaking boundaries, one significant change of this year’s MIJF is Jazz Out West, which for the first time will bring some musical events to Melbourne’s west. That’s especially exciting for Ausjazz, because there are many musicians living in this part of the city, but live music is not as prolific and does not attract the crowds of suburbs such as Northcote — yet.

The big drawcard will undoubtedly be cross-cultural sextet Peter Knight’s Way Out West at Footscray Community Arts Centre. Many will know the albums released by an earlier incarnation of this award-winning ensemble, but this outing will air new compositions written since Sydney’s koto virtuoso Satsuki Odamura and Lucas Michailidis on guitar came onboard.

Led by Peter Knight, their fascinating new project features the seamlessly combining Asian instrumentation and approaches with irresistible influenced grooves and jazz-inflected melodies. Others in this top line-up include Knight on trumpet and laptop, Howard Cairns on bass and button accordion, Paul Williamson on saxophones, Ray Pereira on percussion and Rajiv Jayaweera (rejoining the group from New York) on drums. I can’t wait to hear the new material and let’s hope there’s room for a few Westies to fit into a packed venue.

Other western offerings include Horns of Leroy — a funky brass band — at the Reverence Hotel, Hey Frankie at The Dancing Dog, Afro Beat — with an Ethiopian meal — at African Town Café Bar, and Soundwalk, in which Aboriginal elder Uncle Larry and others will lead a walking and listening tour of the streets, waterways and secret spaces of Footscray.

At last year’s MIJF crowds of younger fans crammed in to catch Snarky Puppy, and Tortoni expects similar enthusiasm for bassist Derrick Hodge and vocalist Chris Turner, who perform at The Forum.

In this “festival exclusive” billed as “exciting, cutting edge stuff on the razor’s edge of new generation jazz”, Hodge — who performed with The Robert Glasper Experiment in 2012 — and Turner — who many will recall from ERIMAJ last year — will be joined by Federico Pena and Michael Aaberg on keys, Paul Bender on bass and Mark Colenburg on drums. The combination of Hodge with Turner could take this concert in many directions.

In four gigs at Bennetts Lane, the man dubbed “probably the most dangerous drummer alive” — Chris Dave — will defy all attempts at categorisation, bringing elements of R&B, funk, rock, jazz, hip-hop and electronica via his band The Drumhedz. Expect hypnotic beats.

Serious fans of music that ventures into exciting territory must mark their digital diaries for a Malthouse double bill from Australia — Alister Spence Trio — and the USA — Dawn of Midi. Spence’s trio is well known here and accurately described as “endlessly surprising”. Brooklyn trio Dawn of Midi — Amino Belyamani piano, Aakassh Israni double bass and Qasim Naqri percussion — has been lauded for the album Dysnomia. Expect the unexpected from both trios in a concert not to be missed. 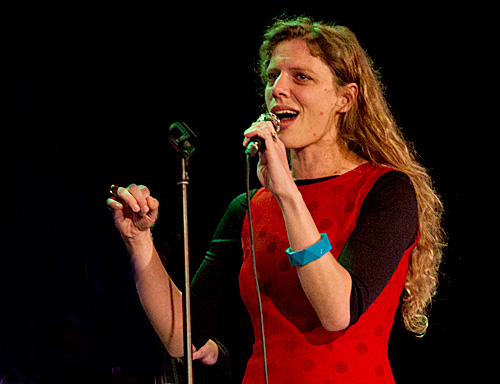 Also at the Malthouse, significant figures in Australian jazz — John Hoffman, Graeme Lyall, Tony Gould, Ben Robertson and Tony Floyd — get together for the first time in 20 years to form The Hunters and Pointers. Joined by award-winning vocalist Kristin Berardi, they will celebrate the release of a collection of unheard live recordings that originally featured Christine Sullivan on vocals.

Another Malthouse double bill will be a musical treat. In one set, the winner of this year’s Don Banks Music Award and member of the Jazz Bell Awards hall of fame, Mike Nock, will join his former student, drummer Laurence Pike. In the other one set, saxophonist Julien Wilson — who was a star of the 2013 Wangaratta Jazz and Blues Festival — will again visit the quartet format with New York-based pianist Barney McAll, Sydney bassist Jonathan Zwartz and Melbourne drummer Allan Browne. This double bill will not disappoint.

The Monash Art Ensemble, led by Paul Grabowsky, never disappoints, so seat belts may need to be fastened when this exciting ensemble of students and seasoned players teams with British jazz maverick, pianist and composer Django Bates and his piano trio, Belovèd. Together they will explore the music of Charlie Parker as well as Bates’ compositions.

As mentioned in the earlier preview post, Charles Lloyd’s The Greek Project clashes with an exciting world premiere of PBS Young Elder of Jazz Commission winner Tilman Robinson’s The Agony of Knowledge at Bennetts Lane Jazz Club. Robinson has demonstrated his facility for composition, so his musical exploration of the Icelandic epic poem Volsungasaga promises to be a festival highlight. The work will draw on Norse legends that have influenced music and literature for centuries, as exemplified in Wagner’s Ring Cycle and Tolkien’s The Lord of the Rings.

Sydney musicians at Deakin Edge, Fed Square will explore jazz and film in The Wires Project, a collaborative multi-media work in which vocalist Briana Cowlishaw, Gavin Ahearn on piano, Peter Koopman on guitar and Nic Cecire on drums improvise a musical response to a video by Aymeric De Meautis based on photographs by Singapore’s Chia Ming Chien. The bonus is that this experience is free.

Ausjazz had hoped to preview the intimate club sessions at MIJF 2014, which are the meat and potatoes of this festival and my favourites. Time has ruled that out, so stay tuned for further festival posts and reviews. 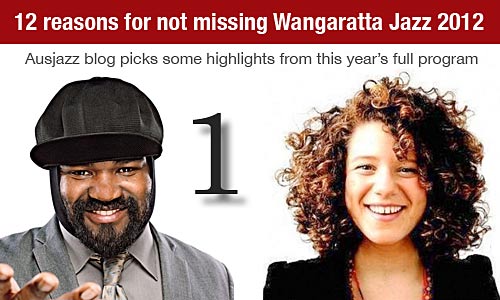 Maybe the stars are aligned. Maybe the success of voices raised against broadcaster Alan Jones has set the earth back on its axis. Maybe the irresistible force of vocal talent which is about to gather at Wangaratta Jazz and Blues Festival from November 2, 2012 is exerting its magnetic power.

Whatever the reason, this reluctant enthusiast for vocals in improvised music has received some signs that a Kurt Elling experience may lie ahead for me in the wilds of Wangaratta this year. When Elling performed at this prestigious festival, I was initially reluctant, then so captivated that I went back for more. (Why reluctant? Well, I have often found that the when music includes vocals, I quietly and secretly wish that I could hear the (other) instruments — and that is not from any lack of respect for the talents of the vocalists.) 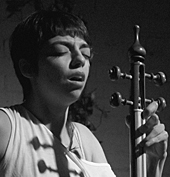 So, what signs have I seen? Well, at two recent gigs I have unexpectedly warmed to the work of vocalists, albeit only one of whom will be performing at Wangaratta in 2012.

In a short set at the Make It Up Club in Fitzroy, Adam Simmons played shakuhachi in a duo with Iranian Gelareh Pour, who played the kamanche stringed-instrument and sang so effortlessly and with such purity of sound that I was entranced.

Since then, at Paris Cat, Sarah Holmes invited Louise Goh to the microphone in a set by The Outfit. Again, I was struck by how much wordless vocals added to the pieces.

Neither Gelareh Pour nor Louise Goh will be at this year’s festival, but you never know what the future will bring.

And, as if these were not sufficient signs of the earth moving, I have had the opportunity to be immersed in the striking and compelling contribution of Carl Pannuzzo to MAGNET, which is the quartet comprising the vocalist along with Stephen Magnusson, Sergio Beresovsky and Eugene Ball. The self-titled album just released will, I predict, make its mark. Pannuzzo really takes the listener into interesting territory and demonstrates the power of vocals, as I am sure he will demonstrate with MAGNET at Wangaratta.

So having heard the portents and read the signs, I await the vocal delights at Wangaratta with the expectation of a student beginning a new subject.

Most of the population of music lovers will be hanging out for the strong, soulful voice of Gregory Porter (pictured top left in this post), who grew up in Los Angeles, but has been based in New York for the past couple of years. Porter will play with Australians John McAll on piano, Nick Lester on saxophones, Zvi Belling on bass and Danny Farrugia on drums. Artistic director of the festival, Adrian Jackson, says Porter’s music incorporates soul and gospel elements, particularly his original material but that if you hear him do some the standards on his recordings, such as Skylark and But Beautiful (Jimmy Van Heusen/Johnny Burke) he’s a really superb jazz singer.

Also a drawcard at Wangaratta will be Cyrille Aimee (pictured top right in this post), a young singer from France with a creative, effusive and fun style. She won the Montreux Jazz Festival International Singing Competition in 2007 and was runner up in the Thelonious Monk Jazz Singing Competition in 2010. Based in New York, she often performs at Dizzy’s, Birdland and Smalls. Her Surreal Band, which features expatriate Australians Sam Anning on bass and Raj Jayaweera on drums, will be joined by guitarist James Sherlock.

The 10 were chosen after the three judges (Mike Nock, Michelle Nicolle and Vince Jones) assessed over 60 recorded entries on a ‘blindfold’ basis. They will perform at Wangaratta with an outstanding band comprising Sam Keevers (piano), Sam Anning (bass) and Raj Jayaweera (drums).

As well, Michelle Nicole and Vince Jones will perform with their bands, and Cyrille Aimee will open the Cup Eve concert before Vince Jones takes the stage.

I WENT, I SANG, I RECORDED

Sydney vocalist/composer Briana Cowlishaw, who recorded her debut album When Fiction Comes to Life in New York last year, is coming to Melbourne and will also perform at Wangaratta Jazz & Blues Festival this year.

Cowlishaw recorded the album during a visit to New York, collaborating with musicians including Aaron Goldberg (piano), Reuben Rogers (bass), Gregory Hutchinson (drums), Ambrose Akinmusire (trumpet) and Mike Moreno (guitar).
Her album was released on June 3 through the Planet Company (MGM) and  launched  at Venue 505 in Sydney with the Aaron Goldberg Trio when they were on tour for the Melbourne International Jazz Festival.

John McBeath reviewed the album in The Australian: (see the following link)  http://www.theaustralian.com.au/news/arts/this-weeks-music-ds/story-e6frg8n6-1226071230673 It was also reviewed in Rhythms by Adrian Jackson, artistic director of the annual festivals Wangaratta Jazz & Blues and Stonnington Jazz. He says she sings with “disarming poise and assurance”.

The two shows in Melbourne are: