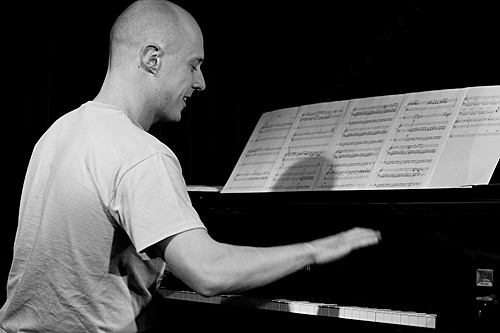 Pianist extraordinaire Marc Hannaford is the 2013 recipient of the Freedman Jazz Fellowship.

Marc was listed as being a Brisbane entrant, but the Melbourne jazz community has long since adopted him as our own. So, yea for Marc!

Marc, who performed with Sam Pankhurst on bass and James McLean on drums, won $15,000 cash.

Congratulations to Marc and to the other three for making it to the finals.

It is expected that Marc will have a smile on his face when he performs with David Tolley, Allan Browne, Ren Walters and Scott Tinkler tonight (August 6) at Bennetts Lane as part of the VIVIFICATION Series.

Everything is going splendidly for Marc, bless him, who leaves Melbourne soon for New York to take up a five-year fellowship to complete a PhD in music theory.

The Freedman Music Fellowships, administered by the Music Council of Australia, provide two prizes of $15,000 cash for a jazz and a classical musician.

Forget for a moment the prospect of debates between Opposition (pause) Leader (pause) Tony (pause) Abbott (pause) and fair-suck-of-the-sauce-bottle Kevin (frankly, let be be quite clear about this) Rudd. The musical debate about to unfold tonight in Sydney is bound to be more engrossing, if less bloody.

Tonight four of Australia’s musicians play off in The Studio at the Sydney Opera House for the $15,000 cash Freedman Jazz Fellowship.

All the best to Marc Hannaford, Raj Jayaweera, Aaron Flower and Jeremy Rose as they perform with their bands  and front up to interviews before respected jazz musicians Andrew Robson, Tim Firth, and Alister Spence, who will be judging.

The finalists vying for this prestigious fellowship are all exciting. Marc  is leaving Melbourne soon for New York soon to take up a five-year fellowship to complete a PhD in music theory; drummer Raj  is now based in New York; Sydney guitarist Aaron Flower won the 2007 National Jazz Guitar Awards; and saxophonist Jeremy Rose won the 2009 Bell Award for Young Australian Jazz Artist of the Year.

The Freedman Music Fellowships, administered by the Music Council of Australia, provide two prizes of $15,000 cash for a jazz and a classical musician.

Publicity material for the concert includes the following profiles (but not the images):

Marc Hannaford (piano, Brisbane) is known as one of the exciting improvising pianists in Australia. His multi-faceted and energetic music combines elements of the American and Australian jazz traditions, South Indian classical music and Flamenco. Marc has released four CDs under his own name and his work has been recognised with awards and nominations. 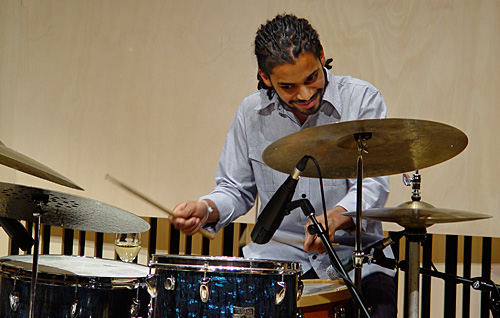 Rajiv Jayaweera (drummer, New York-based) was born in London of Sri Lankan heritage but grew up in Melbourne. He moved to New York in 2011 to do his Masters in Jazz Studies where he studied with Professor John Riley. He regularly performs at Birdland Jazz Club with The Louis Armstrong Centennial Band and has travelled widely performing at jazz festivals and playing with musicians such as Cyrille Aimee, the Kenny Werner Trio, Gilad Hekselman and Chris Cheek.

Aaron Flower (guitar, Sydney) is a regular on the Sydney music scene and has performed with jazz greats both here and overseas and in 2007 he won the National Jazz Guitar Award. He plays and records with bands including his own, BAZ, whose last album was shortlisted for the Jazz Bell Award in 2011. That same year he started Yum Yum Tree Records a collective and label which aims to promote music from 2003 – 2010.

Jeremy Rose (saxophone, Sydney) has played the saxophone at major festivals around Australia, as well as performances in Japan, Norway and Canada. He has studied with top artists around the world and released nine albums of original music with his various projects. He is becoming increasingly known as a composer for ensembles such as Ku-ring-gai Philharmonic, Sirens Big Band and Compass Quartet.

Yes Stonnington Jazz is off and running. Vince Jones sang his heart out in the opening concert, adding lyrics to original compositions by Australian musicians. The emotion was written all over Vince’s face and he sang with conviction, even tackling political issues to a degree that had Stonnington’s young mayor, Tim Smith, convinced the songs came from Mao’s Little Red Book.

Artistic director of the festival, Adrian Jackson, reminded us it was Stonnington Jazz’s fifth year before Jones came on stage with Aaron Flower on guitar, Simon Barker on drums, Ben Waples on bass and musical director for the evening Matt McMahon on piano. As usual in one of Jackson’s festivals, it was an interesting concept, with Jones adding lyrics to “absolutely beautiful songs” by Australian musicians.

So how did it work? Well, I may as well be up front about my general preference for music without words, though that’s an individual thing. I just find most often that I love the music between the vocals more than the words, which bring an obligation to worry about the meaning. But that’s irrelevant to how Jones and guests performed at Malvern Town Hall.

Some longstanding fans of Vince Jones — and there are plenty — told me he did more singing at this concert than at earlier gigs. It was, after all, his opportunity to create a songbook. I’m not sure Jones’s voice is all that strong, particularly in the higher registers, so I found him most impressive in his conviction and presence. It’s a hackneyed phrase to say someone wears their heart on their sleeve, but Jones can definitely move an audience. And I am always impressed by a singer who makes no apology for taking on controversial issues in their lyrics — it’s honest and it’s unashamedly a bid to challenge the audience with the power of the ideas.

Jones opened with The Three Sisters (Jones/Barney McAll), which was about three women he met during a uranium mining protest in Arnhem Land. It worked well enough, but This Is The Woman (Jones/McMahon), written about his mother, seemed to have some twee lines in the lyrics. The Doug De Vries classic The Nature of Power, with Julien Wilson joining in on saxophone, seemed once again to suit Jones, and his question about the absence of a modern Tolstoy, Martin Luther King or Gandhi was poignant. A stab at George W. Bush came in Luncheon with The President, and again this worked well. Jones has a naivety and sincerity that allows him to sing “hate is the absence of love” and “lies are the absence of truth” in a way that resists cynicism.

Mike Nock on piano and Dale Barlow on flute joined in for The Rainbow Cake (Grabowsky/Jones). Then came a first-set highlight — Nock’s composition from the album Dark and Curious, Embracing You, with Nock on piano. This was a moving piece and suited Jones’s empathetic vocals, as did the final song before the break, Blue — which followed Coloured Strands featuring a solo by Flower. There is something frank and earnest (and this is not a reference to the radio show) about Vince Jones and it comes across best in a ballad.

I’ve rabbited on too long, but the second set began with the global environment song Jettison, with the message that we are the captains of this green pearl we call Earth and we can stave off the inevitable. I liked the emotion, but thought Jones’s voice was not quite strong enough to carry the message. Reconciled, including a great piano solo from Matt McMahon, was a ballad ideal for Jones’s vocals.

We Let Them Do It (McMahon/Jones) was inspired by Nigerian poet and environmental activist Ken Saro-Wiwa, who with nine others was hanged by Nigerian dictator General Abacha in 1995 for fighting against oil companies Mobil, Chevron, Texaco and Shell. The rhythmic strength of McMahon, Waples and Barker was ideally suited to the message, and Flower contributed a strong solo over Barker’s drums.

Dale Barlow and, behind, Aaron Flower

Dale Barlow soloed on his composition The Glass House, and then Julien Wilson returned for a solo in his piece The Rebellious Bird, with Jones’s lyrics effective: “… deride me, displace me, still I will rise”.

Mike Nock led a lesson in swing, helped by Dale Barlow on sax, in Can’t Afford to Lose (Jones/B. McAll), leaving few across the crowded town hall who were not moving some part of their anatomy to the beat.

Then Jones, after listing a host of musicians he has valued greatly, including bassist the late Gary Costello, sang My Baby Comes To Me, inspired by musician Russell Smith, who I think suffered the loss of a daughter in an accident. To me this was the most beautiful song of the night, with Waples’ bass giving strength while McMahon’s piano allowed for sadness.

It was a great close to the Australian Songbook.

The audience seemed a little reluctant to call the musicians back, but Jones and McMahon responded with the simply powerful Call Me (Jones/Mcmahon) as an encore.

Stonnington Jazz started well. Ausjazz blog will cover many of the gigs at this festival, which runs until May 30. For details of concerts, visit the festival website.